The legal fight between mega-listings site Craigslist and third parties that have used its data in their own applications looks like it is taking on a new dimension this week. 3Taps, the company sued by Craigslist in July over 3Taps’ Craigslist data API, is planning to file a countersuit against Craigslist, citing unfair and uncompetitive business practices in violation of federal and state antitrust laws, TechCrunch has learned. The suit will be filed in Federal Court in the Northern District of California on Monday.

At issue is the claim that the information on Craigslist is already publicly available through searches on sites like Google. Here’s one example: 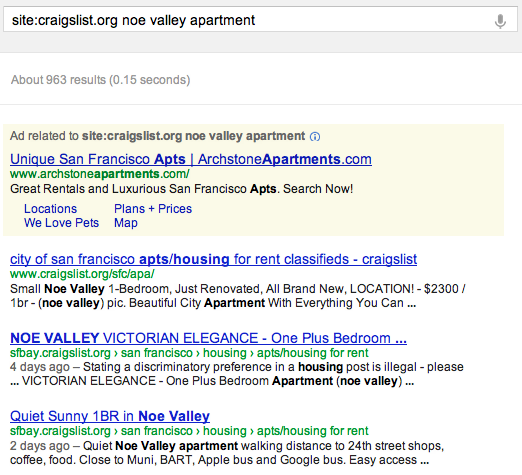 “The issue here is who gets to use exchange related data – product descriptions and prices – in a vital online marketplace.   By allowing search engines to capture this information, Craigslist is making it publicly available in an attempt to drive users to its site, yet refuses to accept the consequences: consumer-driven innovation,” Greg Kidd, the founder and CEO of 3Taps, said in a statement. “That public data could be leveraged to spur innovation that will render markets more efficient and create better experiences for consumers. But Craigslist would prefer to stymie any potential competition at the expense of its users.

“While we respect what Craigslist has accomplished in attaining dominance over online classified advertising, we object to them using that market power illegally to stifle innovation and hurt consumers.  As craigslist spends heavily to bully and intimidate companies that challenge them, consumers are deprived of better ways to find and execute real-time exchange transactions”

Kidd also believes that data that appears in search engines is public, and “Public facts are public property,” he noted.

RWW, which also notes the impending lawsuit, quotes Kidd as saying that 3Taps is actually filing two counters in this suit: one “a defense on the intellectual property grounds pointing out the CL copyright like claims are bogus”; and the second “a Sherman antitrust claim filed by the leading anti-trust law firm in the United States: Skadden Arps.”

Craigslist’s public battles with third-party sites began back in June, when it issued a cease and desist order to Padmapper for using its housing listings on its own site, even though PadMapper ultimately directed traffic back to Craigslist in the process. PadMapper was not the only one served with a C&D at the time, with several other sites also confirming to TechCrunch they’d been served with similar orders. PadMapper found a workaround by using 3Taps’ data, although that, too, used Craigslist listings. PadMapper is included in Craigslist’s lawsuit against 3Taps.

But that’s not the end: because 3Taps’ API is used by other sites as well, more defendants may well get added to the case.

The rise of third-party sites using CL data came out of the fact that many of these sites have developed features that Craigslist had not, which actually made using Craiglist listings easier to use for some. For example, PadMapper rose to popularity because it plotted Craigslist listings on a map, something Craigslist did not offer.

However, Craigslist in the last several months has been adding new features to its site, including maps. That could mean Craigslist is trying to improve its own site to keep people on its own service. Or it could be one reason why it began swatting at so many of these third-party sites in the first place: What used to be complements/enhancements to Craigslist listings are now competitive.

TechCrunch has reached out to Craigslist numerous times for comment, and has never received a response. But here is a possible clue to what Craigslist’s position may be in all of this: Craigslist in August tried to claim exclusivity on posts made on its site — although later it dropped that idea. Ultimately, Craigslist may try to argue that listing data is not exclusive to them, but the posting on Craigslist is — something implied in a post recently by the Electronic Frontier Foundation revealing how CL was dropping its exclusivity clause.

Meanwhile, Craigslist may currently have some of the most extensive housing and other listings online, but as this legal drama continues, it’s also opening the door to other would-be competitors and workarounds. And those that have been using Craigslist in their aggregation services are now casting their nets even wider.

“Our goal is to be a Kayak for rentals aggregation,” notes Blake Pierson, the founder of Lovely, another site that uses 3Taps’ API for listings information. He says he supports 3Taps’ fight against Craigslist (Kidd is also one of his investors), but ultimately sites like his will turn to aggregating as many sources of rental information that they can find.