Offers, a free couponing service launched by Facebook back in May to beef up its commercial profile with businesses, is getting an update. From today, and gradually rolling out globally, Facebook is adding some new features — one to enhance the product for businesses, with a new e-commerce option; and another to enhance the product for Facebook itself, in the form of more ads.

In the first of these, businesses will start getting the option to include a barcode, or other unique code, into their Offers.

Facebook says that this has been one of the most requested features since the coupon service was launched earlier this year. The idea here is the same as for barcodes (and QR codes and other tracking services) in other mobile apps: businesses — and Facebook itself — can use the codes to track what people redeem and when. And — perhaps more importantly — Facebook notes that “this also makes it possible to run Offers for e-commerce sites online.” That in effect opens the platform to a far wider scope for actual transactions, although for now it looks like the transaction will happen independently of Facebook itself.

The second update is a new rider that Facebook is attaching to the Offers product. From now on, businesses that want to run Offers in users’ news feeds — the optimal place for them to get seen — those businesses will have to buy advertising — specifically Page Post ads. Up to now, the ability to put those Offers into people’s streams was free. Now, the only free option is to run the coupon on the businesses’ own page — unless that business antes up and buys an ad.

“A requirement to create an ad with their Offer to achieve more distribution: Businesses will still be able to run Offers for a minimal budget, but ads must be created in order for people to see Offers in their news feeds,” Facebook notes.

Update: Reuters reports that the price for these ads for each Facebook Offer will be at least $5, although it doesn’t specify what exactly that price covers, in terms of user numbers. [orig. article continues below]

The advertising requirement shouldn’t come as any surprise: Facebook is very focused on growing that part of its business, and so giving Offers as a free (or virtually free) product was never going to be long for this world. It also makes sense for Facebook to more closely integrate all of its commercial activities — and after all coupons are simply another form of marketing and advertising.

What’s more interesting to me is the inclusion of barcodes (and other codes) in the coupons. It shows that Facebook is ramping up its own involvement in the commercial part of the equation for the businesses that use its platform.

It puts Facebook potentially in line to link up the service with others like Apple’s Passbook, and might even see the company integrating some of the IP and technology it has been acquiring. Specifically, in May (coincidentally, the same month it launched Offers) the company purchased TagTile, a mobile point-of-sale app to track rewards, coupons and other loyalty offerings that help businesses build up better relationships with their customers. Facebook would not comment on whether there were any Passbook or other integrations in the cards. A spokesperson did note, however, that the Offers that businesses created could link either to an e-commerce site or be redeemed in-store. She also pointed out that “Facebook doesn’t get a commission.”

And Facebook today didn’t provide any metrics for how well its Offers have been doing since launching in May, except to that that “a lot of businesses have seen great success.” One example it gave was for the ARIA resort and casino in Las Vegas, which had over 1,500 room nights booked “for a nearly 5X [return on investment] after running Offers on Facebook.”

I have yet to see a Facebook Offer with a barcode but did see one with another tracking code — from UK online supermarket Ocado. Below is what the email confirmation looks like when you accept an Offer — meaning it doesn’t look like Facebook is yet making the offer an instantaneous option, redeemable straight from your newsfeed.

Also, it looks like there are still a few teething problems: the email says to either print out the offer or show it to staff from your phone, but as this is for an online-only company, that instruction is irrelevant. 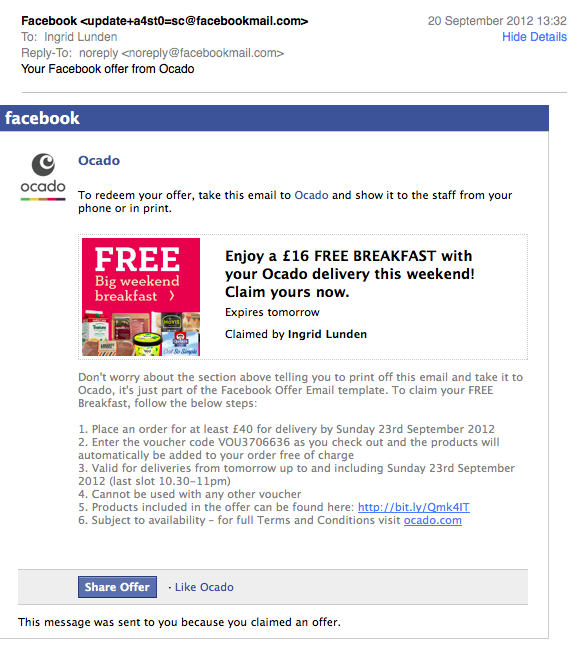