New research out from Google, working with market analysts Ipsos and Sterling Brands, puts some hard numbers behind the often-noticed trend of how people in the U.S. are using a combination of phones, tablets, computer and TVs to consume digital content.

While each of these has a significant place in our consumption today, their real power lies in how they are used together — in combination, 90% of all of our media consumption, or 4.4 hours per day, is happening across all four (which doesn’t leave much room for paper-based books and publications; or for radio). This not only has implications for how content is designed, but also for how companies like Google will continue to hedge their bets across all four screens.

The state of TV viewing perhaps illustrates consumer usage best of all: polling 1,611 people across 15,738 media interactions and nearly 8,000 hours of activity during Q2, the study found that users are watching TV on average for 43 minutes per session — the most of any screen — but 77% of that time we are simultaneously using another device like a smartphone or tablet.

The study also found that although a lot of attention is being focused on smartphones and apps, this device is not only the smallest screen in our world, it’s also used for the shortest bursts, at 17 minutes per session, compared to 30 minutes on tablets, 39 minutes on PCs and the 43 minutes watching TV. 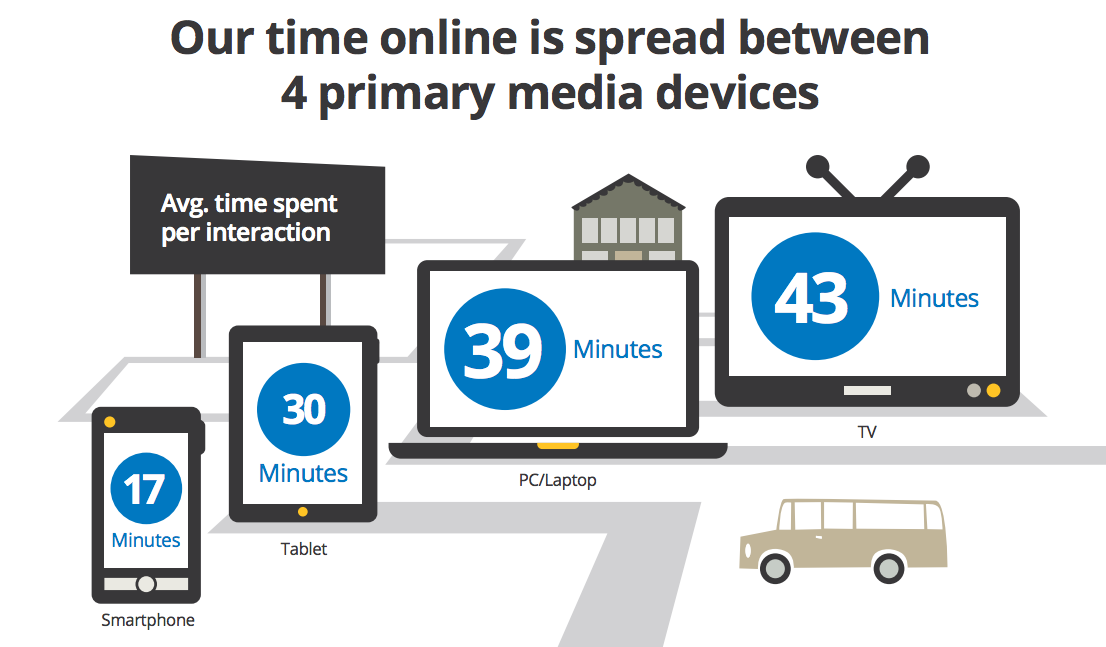 But, while smartphones may have the shortest sessions , they are the most-used when it comes to on-boarding to a digital experience — or sequential device usage, as Google calls it. The research found that a majority of online tasks get initiated on a smartphone while being continued on another device — perhaps with a larger screen for easier use.

That effectively means that while your total content experience perhaps doesn’t need to be designed for a smartphone experience, at least the initial part of it should be, and that part should be integrated with how that content might be used on other devices — so, for example, watching a film first on a phone and then finishing it on a TV, or starting a shopping experience on a phone and finishing it on a PC. 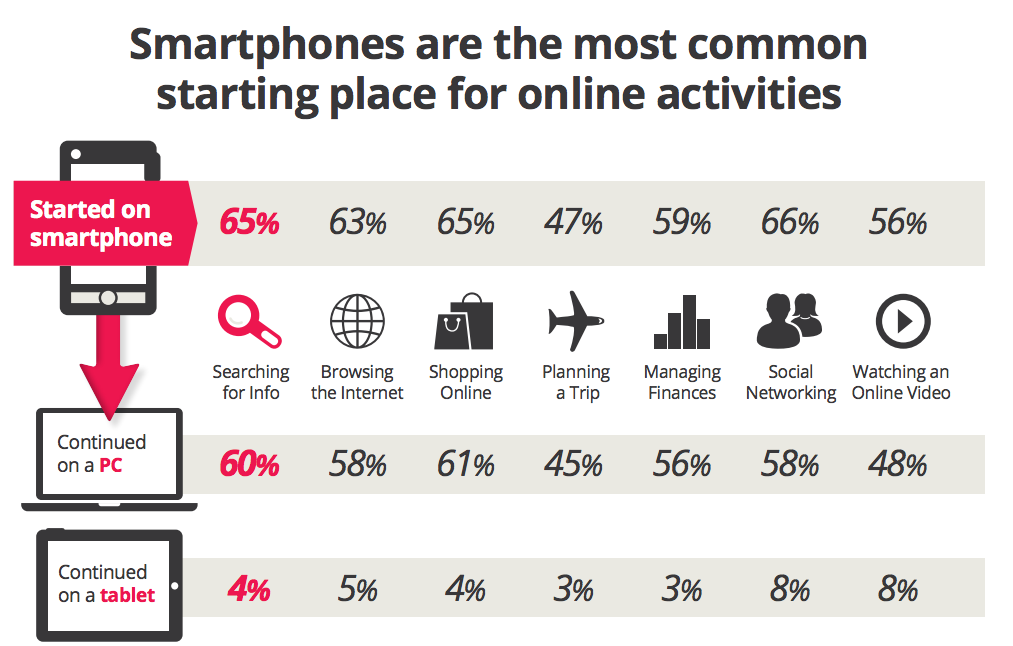 The survey also found that smartphones are the most common sidekick device used simultaneously with other screens. This is perhaps unsurprising, given that smartphones are small and in many ways complement the services we get on PCs, televisions and tablets, not just with apps but also with voice and text services.

So what are the implications for a company like Google?

Since the bulk of its revenue, despite all its other activities, still comes from ads alongside search, if Google eats its own dogfood, I think we’re likely to see more and more integration with how it lets users search on one device and then continue that experience on another, as well as joined up search experiences across third-party and Google’s own internet properties — both courtesy of their Google accounts.

Given that Google will have advertising following users along the way, it also implies Google continuing to make sure that it has a role to play across all of the screens. Whether it does so as a software-only player, or also through an increasing role in the hardware itself, remains to be seen, although products like Google’s new tablet with Asus, and its new ownership of Motorola Mobility, seem to point in the latter direction.

The full research findings are available here and embedded below.