Kaleidoscope, the mobile and desktop app which is the e-commerce equivalent to Pinterest’s fashion-focused boards, helps users – primarily women – not just find outfits they like, but actually purchase them. The company recently rolled out an updated version of its app which represents the first step towards an important, forthcoming feature: Kaleidoscope is moving into personalized recommendations for fashion.

What this means is that, going forward, Kaleidoscope won’t be just about randomly browsing through tops and skirts and handbags and shoes – it will begin to learn what it is you like. 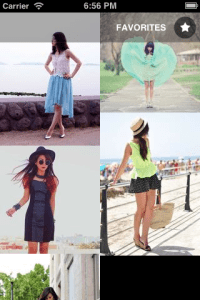 This level of personalization is not live yet in the new version, to be clear – but it’s on the horizon. Initially, the company had to deepen its Facebook integration to start the process of developing the appropriate algorithms for personalization. In the earlier version, Kaleidoscope only had simple social media integration built in – users could browse and search through items then share to Facebook, Pinterest or Twitter. But in the new version, Kaleidoscope is pulling in users’ Facebook profile data to learn what they like in order to show them items similar to those they’ve expressed interest in.

Better support for Facebook isn’t just about addressing the need for more customized and personalized experiences, though. According to Kaleidoscope’s Director of Business Development, Sarah Kunst, Facebook users are also the most highly engaged. “Pinterest is a great firehose of traffic, but the users don’t necessarily become weekly active or daily active users,” she says of the service’s second-largest source of referral traffic (the top being direct). “A Facebook users spends 50% more time on the site, and returns at a higher rate as well,” she adds. 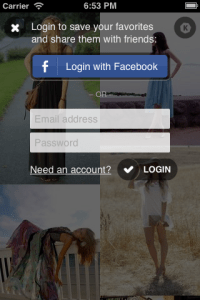 Also new in version 2 of the app is support for unique profile URLs, which lets users share their favorites with others outside of the social web – a top-requested feature.

For those unfamiliar with this company, Kaleidoscope is a mobile-first startup which launched on Android during this year’s Fashion Week in NY, later expanding to iPhone, web and Facebook. The latter two were added in order to better serve its demographic which Kunst admits is largely women shoppers. (It’s worth noting, however, that the company did experiment with men’s fashion during this year’s Coachella music festival.) Essentially a visual search engine for fashion, the app pulls in items sourced from fashion bloggers, photographers, and the databases of many major Internet retailers (e.g. Macy’s, Nordstrom, Net-a-porter, Saks, Neiman Marcus, Bergorf Goodman, Shopbop, etc.) and even some smaller ones. While those retailers are not partners, the company has teamed up with companies like Condé Nast and AOL (disclosure, TechCrunch corporate parent) for special events like Fashion Week, in addition to doing its own original photography in some cases.

With the rollout of the updated iOS app last week, which hit the “New & Noteworthy” list in North America, like its localized counterpart did in parts of Latin America, Kunst says 60% of users have shopped products in the app overall, and 80% of desktop users have done the same. Pinterest sharing is also up by over 80% since last Thursday’s v2 debut. The company isn’t providing raw download numbers or details of conversions (as tracked via its affiliate programs) at this time.

You can grab the Kaleidoscope app here on Google Play or here on iTunes, where it’s designed for both iPhone and iPad.