We have seen reports from Strategy Analytics, IDC and Canalys detailing how many smartphones that handset makers shipped in the last quarter (the takeaway: Android is still on top, with Samsung the chief benefactor); today, Kantar Worldpanel ComTech, WPP’s market analytics business, has released its rolling monthly update on how that translates into on-the-ground sales in some of the biggest markets in the world. The results give more weight to Samsung’s current domination; and underscore how important it is for Apple to “wow” the market next month with the launch of a new handset.

Kantar, which bases its conclusions on millions of interviews with consumers every month (1 million in Europe alone, it notes), found that Samsung is currently the top-selling brand in Europe at the moment, thanks in part to a successful launch of the S3 in May, but also aggressive pricing in a region hit by economic pressures. Samsung accounted for 45% of all smartphone sales across the UK, Germany, France, Italy and Spain in the last 12 weeks that ended July 8. Arch-rival Apple, in contrast, accounted for just 16% of all sales in the region, Kantar analyst Dominic Sunnebo tells me. In fact, Apple has declined in every market Kantar surveyed, except for the UK and U.S.

Android’s share of sales across the big-five European countries is now at 66%, a big jump from 43% a year ago, Kantar notes. In Australia, Android took 60.5% of all sales in the period, and in the U.S. it accounted for just over 51% of all sales.

Apple’s lackluster performance in Europe is something that Apple itself highlighted during its last earnings report, blaming the economy and people holding off on purchases until the next iPhone release. Kantar showed that as a result of these factors, Apple took between 4.3% and 11.4% fewer sales in the last 12 weeks than it did a year ago across the markets of Germany, France, Italy, Spain and Australia — with Australia accounting for the biggest of those declines.

Interestingly, despite Android doing so well globally, it actually declined in one key market: the U.S. its 51.5% share of the market is actually 5.3 percentage points down on a year ago. Was this because the Galaxy S3 launched later there, I asked Sunnebo? No, he says, it’s about consumer preference and price:

“An important point here is that there is very little difference in price between an Apple iPhone or an Android phone in the U.S., so the choice is made purely on what the consumer wants, not what they can afford,” he tells me, “whereas in Europe, Apple continues to command a price premium over Android. With recessionary pressures as they are in Europe this is likely to have an impact.”

Indeed, he notes that the S3 is more of a brand pusher than a direct sales generator: “While the majority of noise is focused on big-name products such as the S3 or S2, it’s easy to forget that Samsung is selling smartphones across all tiers,” he notes in the report. Kantar says that in the UK, for example, Samsung accounts for five of the top 10 best-selling smartphones in the UK, “with even the smartphone/tablet hybrid Samsung Galaxy Note making it into the top ten.”

Kantar notes that a lot of this appears to be about people holding off from purchases until the next iPhone comes along. “Kantar Worldpanel ComTech data clearly shows that the proportion of Apple consumers who have owned their device for at least 18 months and not upgraded has increased markedly over the last quarter, indicating current owners are holding off upgrading until the release of the iPhone 5,” Sunnebo writes.

Indeed, the Apple brand continues to command “high loyalty”: in the UK 80% of consumers who own an iPhone have bought another; and 92% say they plan to stick with Apple when they next upgrade. “With this in mind, any dip in Apple share is likely to be short-lived with the release of an updated iPhone in quarter three bringing momentum back to the Cupertino giant,” he concludes.

Other brands. The story is not great. While Apple’s declines may be short-lived, RIM’s seem more indicative of a longer-term issue. The only country where it has managed to stave off market share declines is in France, where it only accounted for 9.2% of sales. In the U.S., which used to be RIM’s proud, top market, it only accounted for 3.7% of sales. Ouch. The UK is the only market where RIM managed to go into double digits for sales, with 10.9% of sales in that country, although that is half of what it was last year.

The story for Windows Phone is similar to that of iPhone and iOS, notes Kantar — that is, people appear to be holding off for Windows Phone 8 releases. That’s happening on a much smaller and more depressing scale, though. Windows Phone did not break through even 5% of sales in any market Kantar researched, as you can see in the full tables below. And just as RIM has a (sort of) break out market in the form of the UK, Symbian is still seeing a bit of life in Italy, where it accounted for 12.8% of sales, although that is a decline of more than 22 percentage points on last year. 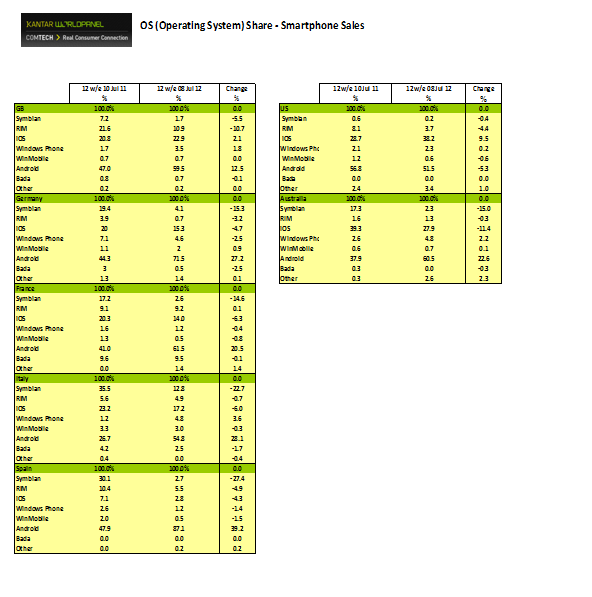