They say imitation is the sincerest form of flattery, but Square is definitely feeling insulted right now. The well-funded and popular mobile-payments startup has issued a cease and desist letter to UK-based mPowa, a newer mobile payments company that offers a device very similar to Square’s — plugging into a handset or tablet to enable point-of-sale (POS) mobile payments. But the complaint doesn’t have to do with mPowa’s dongle, or the technology behind it: it focuses on a picture of how it’s used. Square alleges that mPowa has lifted a photograph from its site and is using it as its own.

The C&D, while only related to a promotional photo that appears on mPowa’s home page, points to bigger issues about how competition is heating up amongst mobile payment companies — and specifically those that are looking to offer services that largely have a similar look and feel as far as customers go. In the letter that Square has issued to mPowa — we have embedded the full letter below —  Square’s lawyers say as much, too: “The copying of Square’s image is clear and obvious,” they write. “Indeed, it appears that mPowa’s infringement is intentional and deliberate, and that mPowa’s attempt at imitation may extend to other key Square intellectual property, including the Square Website and Square’s trademarks and trade dress.”

And, while mPowa launched in the U.S. the other week, the question of competition is not just in the U.S.: it comes one day after it was reported (yet again, one more time) that Square was planning to go international.

To be clear, this is a letter accusing mPowa of lifting one of Square’s promotional pictures — not the device or technology themselves. However, it makes implications that there may be more at stake. Later in the letter, the lawyers ask for additional information, including how and why this came to be, who was responsible, and “whether and to what extent mPowa has investigated whether other proprietary efforts of Square have been duplicated.”

Dan Wagner, the CEO of mPowa, has dismissed the letter: “We think this is a petty attempt to divert our focus from trying to capture a meaningful share of the mobile POS market,” he told TechCrunch. “It won’t deter us from our focus, and everything contained in the legal missive is completely unfounded.”

He dismisses, too, any implications that mPowa is copying Square in other ways beyond photos. He notes that the company holds several patents on existing technology, specifically around the use of chip-and-pin and identifying users at the device and server end — and is also the holder of patents on technology that it will be introducing down the line, using retina and fingerprint identifications for mobile payments.

Since mPowa launched in the U.S. the other week, Wagner says that the company has had a larger-than-expected response to the product. MPowa’s service is similar to Square’s (and others like iZettle, Payleven and more), in that it uses a dongle, but it is different in that it works with other platforms beyond iOS, and it accepts chip-and-pin as well as swipe strip cards [Update: Square has worked with Android since it launched.]. The focus of interest so far, Wagner says, has been from banks, telcos and larger merchants interested in white-labelling mPowa’s dongle. The other attraction for larger businesses, he says, is that “they already have banking partners, and they don’t want to have to arrange those deals again just to use Square’s service.”

While Wagner would not comment on what mPowa’s legal response will be to Square’s letter, TechCrunch understands from another source that mPowa will “likely change the photo” to avoid further trouble like this. “The bloke in the picture will no longer have a denim shirt on.” 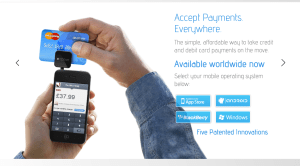 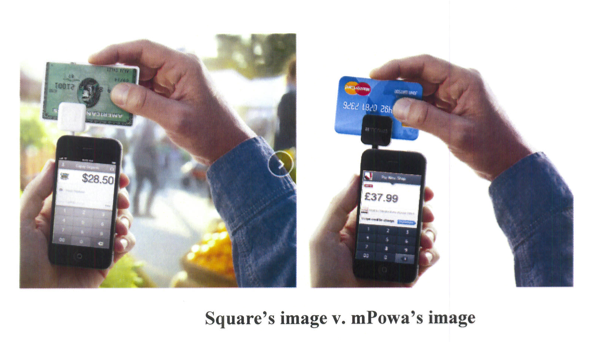