Two years after it was meant to go live, and with a list of backers that includes the BBC, ITV, Channel 4, Channel 5, Arqiva, BT and TalkTalk, YouView today finally crashed the UK TV party. Available by the end of July with a selection of major retailers, the service is based around an all-in-one set-top box that you can use without a subscription, which includes 100 digital TV and radio channels, catch-up and on-demand services, as well as the ability to record programs.

But with a price tag that will begin at £299 ($469) without the required broadband thrown in, and competing against a host of existing services, is this a case of too-little, too-late?

At the launch event earlier today, Lord Alan Sugar — a self-made entrepreneur in the UK who is the star of the UK edition of “The Apprentice” — called the event “a great moment in British television,” but some of the reactions online have been quite to the contrary:

The service will first launch as a standalone product selling at major retailers like John Lewis, Dixons, Comet, Currys and Richer Sounds — as well as Amazon and the supermarket giant Tesco. The price for the set-top box is likely to go down when BT and TalkTalk, two of the investors in the service, start to bundle it with their own broadband offerings — where it will be part of a subscription package, much like carriers do with mobile devices.

The service sounds good enough, but for a set-top box pay TV service, it’s hard to see why consumers would choose this over something like Sky’s, Virgin’s or BT’s existing TV offerings, which already come bundled with broadband and offer all of these features and more.

YouView first came to life years ago as Project Canvas, a hopeful-looking joint venture between broadcasters, infrastructure players and broadband service providers to offer digital TV and on-demand services that would have, at the time, been a disruptive and probably welcome presence against the dominant pay-TV players Sky and Virgin. However, regulatory and technical hitches, coupled with other delays and management changes, have been an almost constant presence on the project from the start. In all, it has been estimated that the project will cost £115 million ($180 million) over four years from April 2010. (Some might argue that this, in fact, was the problem: not nearly enough money put into this to create something truly groundbreaking.)

Fast forwarding to 2012 and the final launch of the product, the whole industry has moved on: not only are there more pay-TV providers out there (including BT itself with its Vision service) but the existing services have become a lot more encompassing — for example BBC’s catch-up service iPlayer can be accessed via Virgin and BT’s services. On top of that, there are a host of other ways to get your TV fix now via OTT plays from Netflix, Amazon/LoveFilm, Google and more.

Moreover, YouView’s basic offering — 100 digital TV and radio channels, seven day catch-up and on demand programmes from the content libraries of the BBC, ITV, Channel 4 and Channel 5 — lacks something else that has been the clincher for many a household prepared to invest in pay-TV in the UK: exclusive content rights, specifically around sport. (Although the lesson of ITV Digital was that even this does not guarantee success.)

And yet, and yet… even if the initial signs do not look good, there is still some potential for how this might develop. YouView says it has had “interest” from over 300 potential content partners — with the “formal enrollment process” for them to join the platform also launched today. (Why YouView didn’t get these potential partners on board before launch, however, is not clear.)

Richard Halton, CEO, points out that in a trial of the service covering 2,000 homes, the feedback has been “very encouraging.” “It confirms that YouView is easy to set up and use and different to what has gone before,” he said. “In many ways we’ve only just begun.” Time will tell if YouView’s beginning was actually it’s end, too.

Update: A reader sent me a picture of how this story posted in his twitter feed, ironically just at the same time as a tweet from Lord Sugar himself. Don’t you love serendipity. 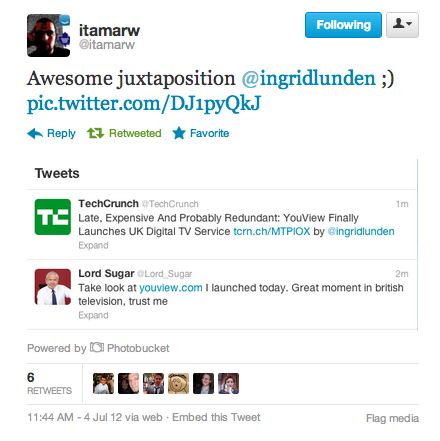