Twitter’s Bootstrap gives developers an easy to use grid-based and responsive framework for quickly designing prototypes and basic web pages, as well as production-ready interactive sites. With Foundation, product design company ZURB offers a direct competitor to Twitter’s product and the company is launching version 3 of its framework today. This new version, which the company just announced at Groupon’s Schmonference, is significantly easier to customize and, as ZURB tells us, almost all of the CSS code has been rewritten to make it more polished and easier to restyle and modify as well. The Foundation team also rewrote some of the grid system – which is really the heart of the framework.

As ZURB told us earlier today, the new grid system is “a freakishly powerful original creation which applies to almost any project — we think it’s the best grid system out there.” While the earlier grid system used percentages for the margins, for example, it’s now much easier to change the gutters of the grid by just changing one value. 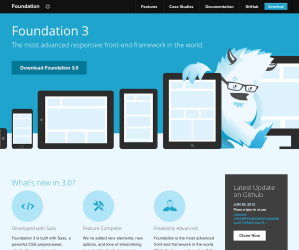 Another area the team focused on is typography. Foundation’s typography is now based on a modular scale that should make it easier for designers to ensure that they can “keep a consistent vertical rhythm down the page,” as ZURB puts it. Developers, of course, can still fine-tune the fonts they use as well (you can read more about how Foundation does this here).

In addition to all of this, ZURB is also now making Foundation more of a core product and is dedicating a small team of engineers to these efforts.