Yesterday the WSJ outlined how Yahoo’s new, interim CEO Ross Levinsohn is taking the company back to its earlier roots of focusing on advertising around its media properties, which collectively see 167 million monthly online users. The last 24 hours indicates that Yahoo is trying to move fast on that idea. Today the company announced three executive media hires, and TechCrunch has had a look in on a new interactive mobile TV service its using to enhance its video offerings.

And there is more. The news comes less than a day after Yahoo announced a global deal with Spotify for music content, which will see the company integrate Spotify music across its media properties and create content for the Spotify platform, but also move away from offering a music platform of its own. Update: after this article was posted last night, Yahoo added another music partner to the mix: Clear Channel and its online radio service I Heart Radio.

I Heart Radio — which features 1,000 analog and digital radio stations — will start to appear across the Yahoo Media network (which includes sites like Music, Movies and omg!). As with Spotify, Yahoo will also provide content to Clear Channel’s sites as part of the deal. Those sites have 237 million monthly online users in the U.S., according to a statement from the companies. It is further evidence of how Yahoo is trying to expand the content that it offers to its visitors online, as part of its advertising push (more content=more audience=more advertising possibilities for Yahoo).

But what’s interesting is that it appears to be trying to do it on a much lower cost base than before. In the area of Music, TechCrunch understands that Yahoo will be moving out of the music platform and programming service altogether, with the only employees left in the music division those on the editorial side (that is the part where Yahoo has said it would contribute — for example in the form of an app that will exist on Spotify’s platform). As of last month, its service had around 24 million unique users per month, TechCrunch has heard from a source.

The new appointments, on the other hand, point to Yahoo picking up more executive expertise, to better manage those relationships. Rich Cusick, the new VP of entertainment and women’s lifestyles, has a track record in growing (and in some cases turning around) media businesses. Most recently he was at Chemistry.com (a division of Match.com) and has also worked for Daily Candy and Gemstar TV Guide. At Yahoo he will oversee Shine, Health, and its Entertainment properties (omg!, Movies, TV and Music).

John Buchanan, Yahoo’s new head of consumer marketing, is the former VP of marketing at Electronic Arts. And Scott Bushman, who will lead up Canada, Latin America and the U.S. Hispanic market for the Yahoo Media Network, has held roles at Wasserman Media, Metacafe and Disney. Cusick and Bushman will report to Mickie Rosen, senior vice president, Global Media & Commerce, Yahoo; while Buchanan will report to Mollie Spilman, Chief Marketing Officer of Yahoo.

The emergence of a service on Yahoo’s video platform is another sign of what may be to come. Using Yahoo’s Connected TV Device Communication protocol, CrowdOptic helped created an interactive service that lets people use their mobile devices at events to record video and their own commentary. When multiple users hone in on a specific point at the event, CrowdOptic’s technology identifies them and they form a “cluster” that can interact with each other. A diagram of how it works is below.

CrowdOptic’s twist on this for Yahoo is that it translates the resulting visuals and texts into a stream of content that runs alongside Yahoo’s video of that event. That means, in addition to the temporary, event-based social networking service, it becomes a second way for viewers to engage with content alongside the main live feed — giving more chances for engagement from TV viewers. It also potentially gives Yahoo another stream of data for its ads business: it can use the data from the event to figure out what is catching people’s eyes and what they are talking about.

The first trial of the service was around a Nascar event last week, and the CEO of CrowdOptic, Jon Fisher, says there will be more joint events to come, including one with a major media and entertainment brand.

How deep will that relationship go? One report raises the idea that CrowdOptic, which has so far had $2.5 million in funding, could even get bought by Yahoo (Fisher is a serial entrepreneur who has sold a company to Oracle in his time). Fisher would not comment on an acquisition but tells me: “I have been doing this for 20 years and this integration is the coolest thing I’ve done.” 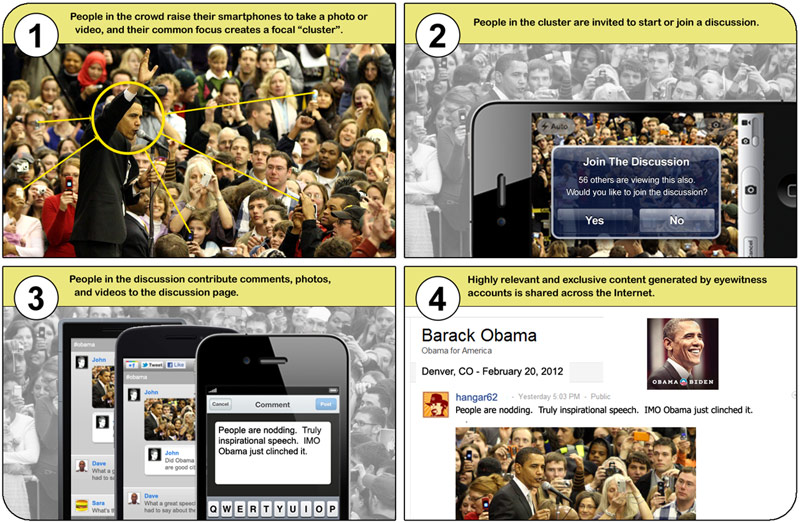