Revel Systems, an iPad point-of-sale company backed by $3.7 million in funding, is today introducing a new hardware product designed to take the place of an Ethernet router. The “Revel Router,” as the device is being called, is an Apple-certified “made for iPad” technology that allows shops to run their POS through an Apple iPad. The router connects other components in a retailer or restaurant’s POS setup, too, including coin dispensers, barcode scanners, scales, kitchen display systems, kitchen printers, receipt printers, and more. And the company is selling the device as a package deal including an iPad, the router, peripherals, and POS software.

More importantly, the system forgoes the need for an ISP-provided Internet connection in order to work – the whole thing can run off the iPad’s 3G or 4G.

The Revel Router works in conjunction with the company’s previously launched point-of-sale software, which is now being piloted by Popeye’s, Twistee Treat, Illy Coffee, Camille’s Sidewalk Café, among others. In total, around 300 locations have the system installed, the majority of which are in the U.S. Initially launched into beta around eight months ago, the POS software was recently updated to a more robust version (dubbed “Atlas”) which includes things like multiple location functionality, analytics, and support for offline mode. 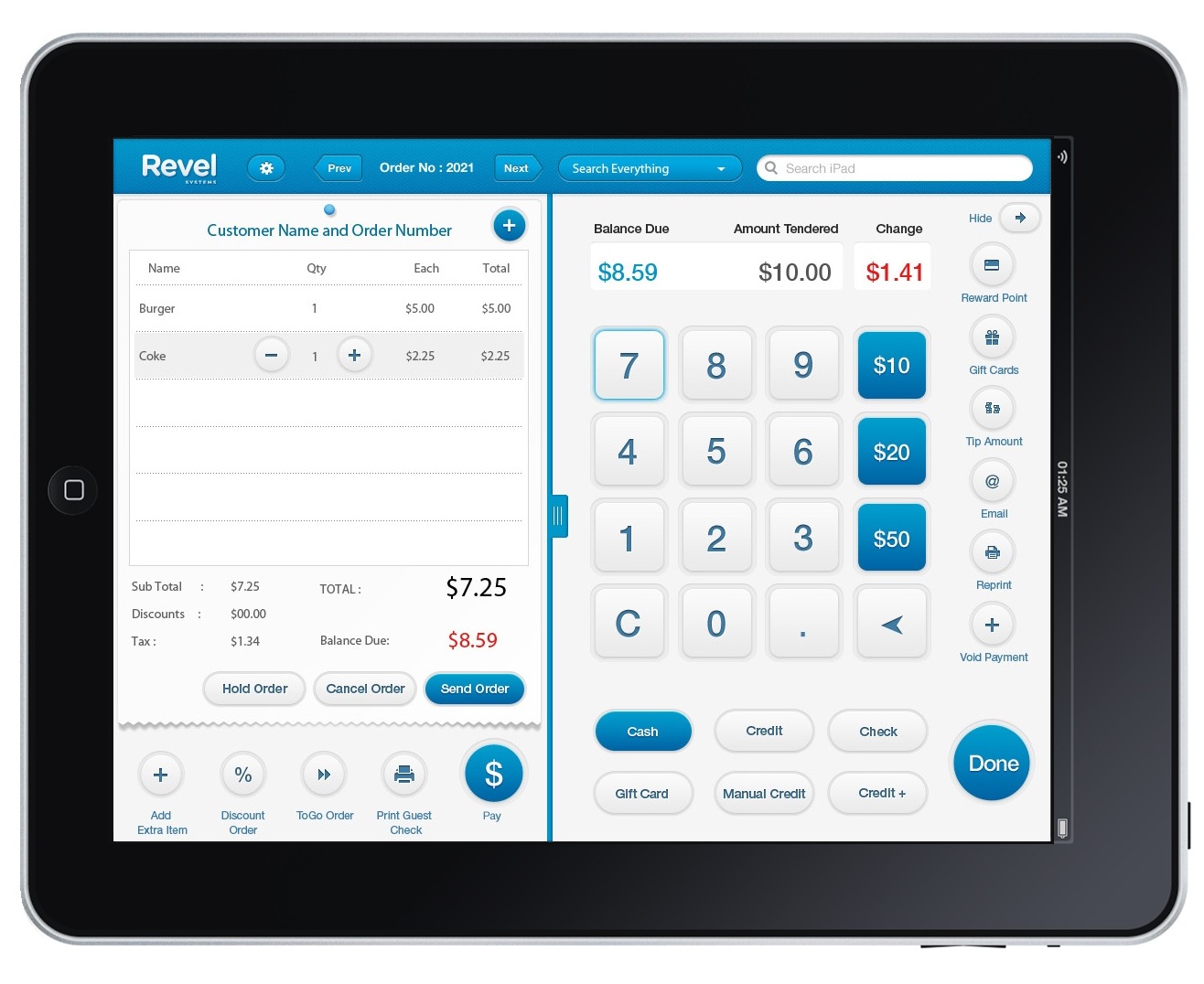 Says Revel co-founder and CEO Lisa Falzone, “a restaurant owner or retail owner doesn’t even know when the Internet goes out,” she says.”This is the biggest problem in these establishments, and it’s our biggest support headache.” When the connection goes down, so does a business owner’s ability to check inventory, run credit cards and process sales, among other things. And many legacy POS systems don’t have offline functionality built in. The ability for operations to continue seamlessly – by failing over the to iPad’s 3G/4G – will be a huge selling point for their software, the company believes. And so will the fact that businesses can have a working POS setup from day one – before they have a chance to call the ISP to come out and install their Internet connection.

“It’s completely disruptive to the point-of-sale industry because it’s truly plug-and-play,” says Falzone. “You don’t need anyone to come in there and hook up your Internet connection, you don’t need to deal with your ISP, there’s no maintenance costs of I.T. people. All you have to do is pull out your printer, an iPad, a stand, and a cash drawer out of the box, and set it on the countertop.” 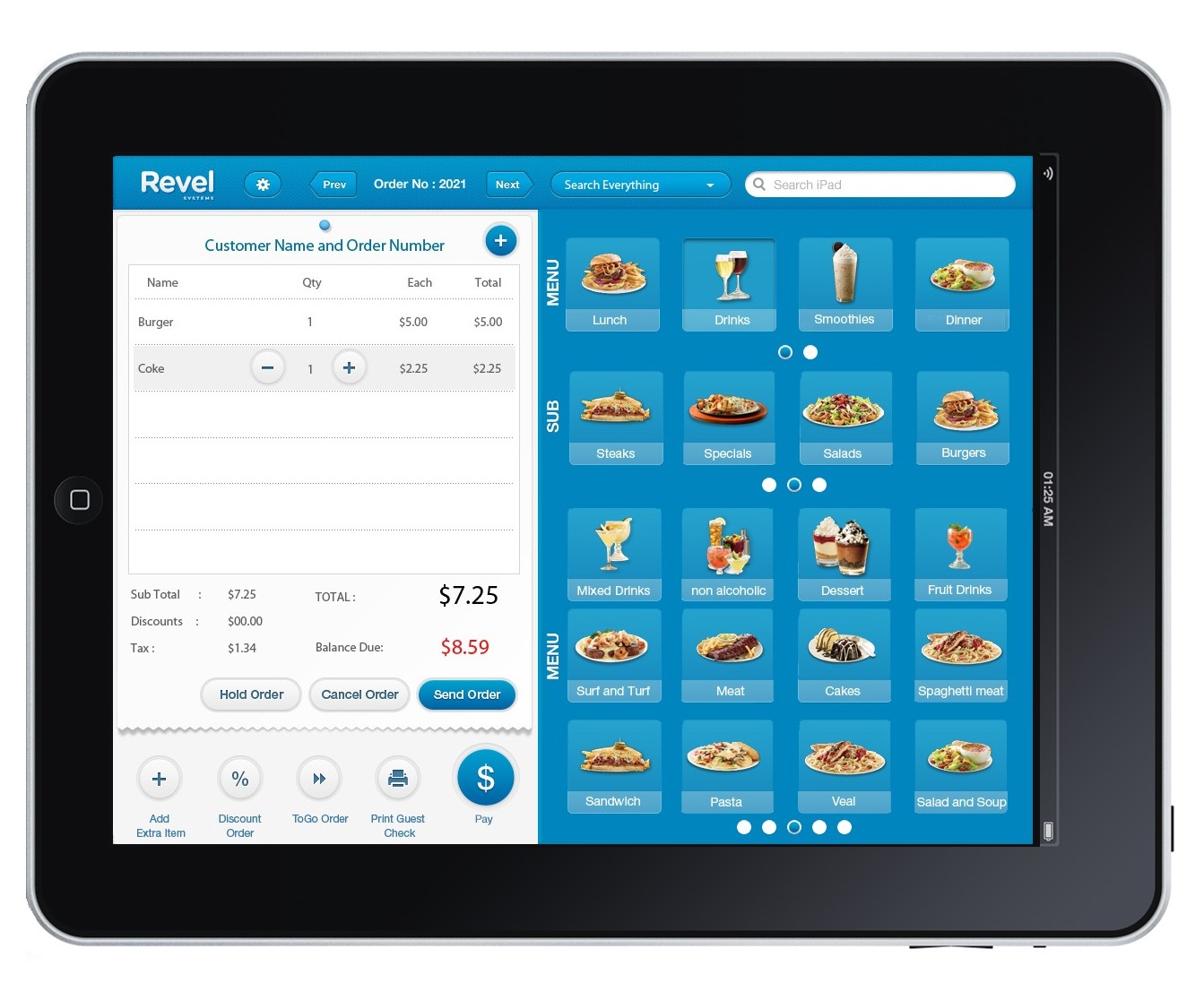 The way the system works involves proprietary hardware and a patent-pending wireless protocol. “The Revel Router has a port on it, and all these devices have a connector on them,” explains CTO Chris Ciabarra of the system’s setup, “and all the devices connect to this router and then wirelessly connect through our driver we created with Apple to the iPad.” He says the system isn’t really designed for mobility, but rather aims to replace the existing, stationary set-ups at the point-of-sale. However, you can connect additional displays once the base station is in place. For example, if you wanted to use an iPad as a display instead of a ticket printer back in the kitchen, that would be possible without the need for an additional router. The second display would just connect wirelessly with the main system.

The starting package is $3,330 and includes an iPad, cash box, printer, credit card swiper, the router, and the software license. Business owners can then add on other components as they choose. In addition, Revel offers two support packages – email and online ticketing support for $100/month or per terminal fee that’s available 24/7.

To be clear, Revel doesn’t consider itself to be a Square competitor, but is aiming directly at the enterprise market. “We go after the restaurants and retail shops that are producing over $300,000 annually and above,” says Falzone. “We don’t go after the street vendors, or people who buy couches on Craigslist.”

Before today’s launch of the router hardware, the company was adding around 50 locations per month, and all retail inquires have been inbound. They’re now hiring additional sales people, Falzone says. She also says that Revel is “very, very close to profitability,” and doesn’t need to raise any additional funding at this time.