A few weeks ago, Google hosted a last-minute press conference in San Francisco to announce its new, highly detailed 3D maps. While many of us expected the company to actually launch the maps then, Google never announced actual launch date. Today, the wait is over, as the new version of Google Earth for Android (version 7.0) now offers access to the new 3D imagery. You can download the updated Google Earth for Android app from the Play store now. 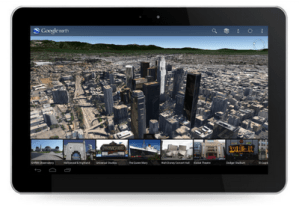 Don’t get too excited, though. For the time being, only about a dozen cities feature these new 3D maps, including most cities in the San Francisco Bay Area, as well as L.A., San Diego, Portland, Boulder, Charlotte, Tucson, Tampa and Rome, Italy (Rome being the only non-U.S. city that currently features the new 3D maps).

At a session at Google I/O today, Google also reiterated that these features will come to iOS “soon.”

Google says that it will continue to release more 3D imagery over the coming months. The plan, says Google, is to offer 3D coverage for metropolitan areas with a “combined population of 300 million people.”

This new 3D imagery is created by using the 45-degree aerial photographs Google is already collecting in many metropolitan areas.

At I/O today, Google also stressed that with Google Earth, the company doesn’t just want people to find information, but also to get lost and just explore. Because of this, it has added a new Tour Guide feature to Google Earth that lets you find interesting sights in the world (in 3D, of course).