In what’s sure to piss off most news readers and general web-perusing enthusiasts, Twitter has gone down. We’ve heard reports that it’s been down for the last fifteen minutes, and without access to Twitter, it’s tough to say whether or not the company has given any updates.

A quick visit to DownForEveryoneOrJustMe.com shows that the site is down across the boards, and of course visiting Twitter.com offers up the same results.

What’s strange is that the usual Fail Whale is missing.

We’ve checked in on Twitter’s blog site and found that they’ve made no mention of the matter yet, but we did see this: 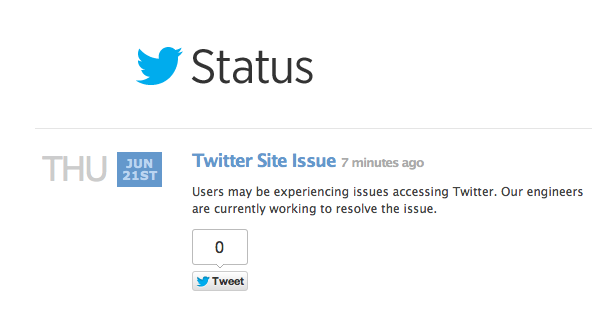 We’re reaching out now to see what exactly the problem is.

The good news is that Twitter’s Mobile site seems to be up and running, so if you’re really desperate to get your Tweet on, get it done on your phone. On the other hand, the iOS app is offering up no joy at the moment.

We’ll keep you updated as we go.

Update 4: 3:20 EDT — Twitter has made the following statement regarding what is going on with this massive service disruption. Check it out:

Today’s outage is due to a cascaded bug in one of our infrastructure components. We’ll provide updated information soon.

A cascaded bug has an effect that isn’t confined to a particular software element; its effect “cascades” into other elements as well.

Update 6: 7:40 EDT — It’s been a rough one. Twitter seems to be working for me at the moment, but according to the developer site things are still pretty wonky.

Unfortunately, and once again ironically, DownForEveryoneOrJustMe.com is also down at the moment. (But in the good way.)

Update 7: 9:20 EDT — Twitter has taken to the blog to explain what has happened. Unfortunately, that explanation doesn’t extend any further than the aforementioned 140-character tweets about cascading bugs. Here’s the initial statement, and you can read the the bits about Twitter’s tremendous traffic and its importance in our lives here.

Not how we wanted today to go. At approximately 9:00am PDT, we discovered that Twitter was inaccessible for all web users, and mobile clients were not showing new Tweets. We immediately began to investigate the issue and found that there was a cascading bug in one of our infrastructure components. This wasn’t due to a hack or our new office or Euro 2012 or GIF avatars, as some have speculated today. A “cascadhttps://techcrunch.com/wp-admin/media-upload.php?post_id=575889&TB_iframe=1

ing bug” is a bug with an effect that isn’t confined to a particular software element, but rather its effect “cascades” into other elements as well. One of the characteristics of such a bug is that it can have a significant impact on all users, worldwide, which was the case today. As soon as we discovered it, we took corrective actions, which included rolling back to a previous stable version of Twitter.

We began recovery at around 10:10am PDT, dropped again around 10:40am PDT, and then began full recovery at 11:08am PDT. We are currently conducting a comprehensive review to ensure that we can avoid this chain of events in the future.

As you can see, it appears that just about everything is up and running now:

It’s been three hours since the site formerly known as Twitter went down completely. This is a full-scale outage, people. No fail whale, no cutesy message about how awesome Twitter’s traffic is at the moment, just an error page.

I’ve been refreshing Twitter’s developer site, and it looks like Status and Timeline updates have been going back and forth between “Performance Issues” status (yellow) and “Service Disruption” status (red).

Tweeters seem to be going through a bit of withdrawal, with many wanting desperately to tweet about how Twitter is down. Irony is fun. 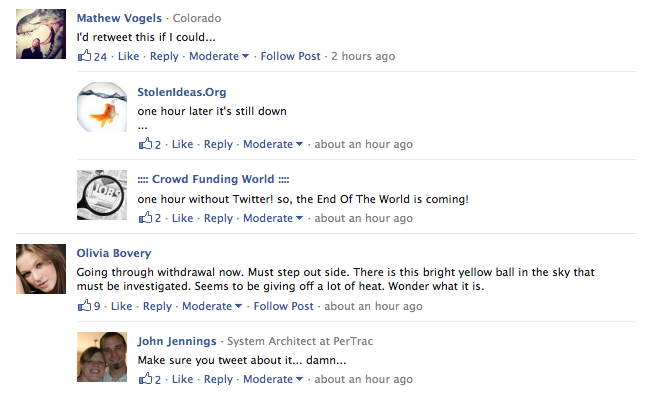 In other news, Facebook is probably having a great day. 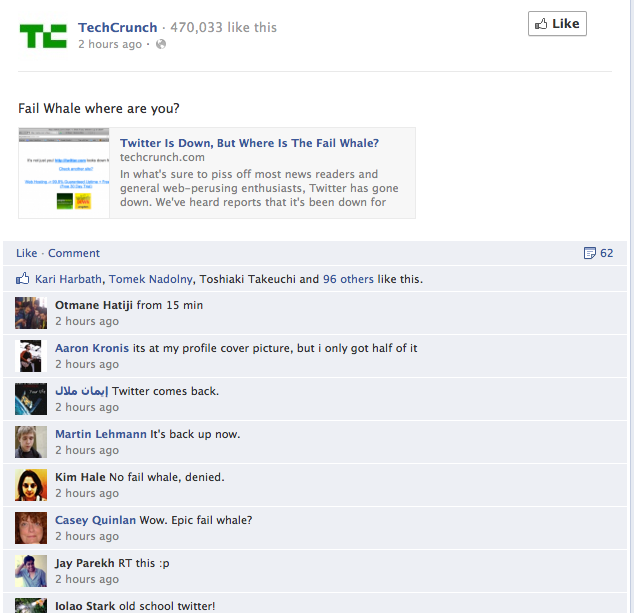 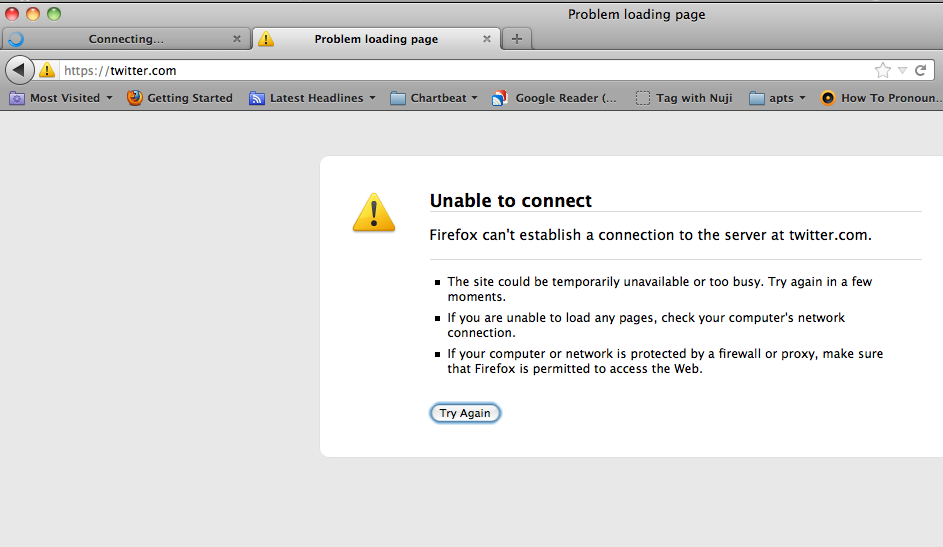