Ah, there’s nothing like the sweet smell of highly-anticipated app updates in the morning. As CEO David Karp promised at last week’s F.ounders conference, the new version of Tumblr’s iOS app has now arrived. And it’s a doozy. (I mean that in a very good way). The app is completely redesigned, a lot faster, and offers a ton of new features ranging from Spotify support to gesture-based shortcuts.

The first thing you’ll notice, of course, upon logging in, is a radically different new post screen. While the app had previously featured colorful icons for things like “text,” “photo,” “audio,” and “video,” etc., the new post screen has gone for a black background with richer, bolder icons. It almost gives Tumblr’s iOS app an Android-like feel, to be honest.

At the bottom are buttons for the Dashboard, Tags, your profile and the Post button. (Watch the transition as you tap the compose button from another screen – Tumblr even got the details right, here.) 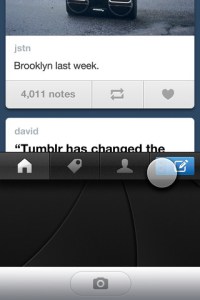 There are several other improvements as well, including support for Spotify, high-res images, and offline access. That last one means you can post, like, reply and reblog when you don’t have an Internet connection – the changes will sync once you’re back online.

Also new are gesture-based shortcuts for things like launching the camera (swipe the compose button up) and text posts (swipe the compose button left). These are the kind of things that aren’t must-haves, but rather nice flourishes that give the app some flair. And the screens load fast – faster than, say, launching the camera from the iPhone’s lockscreen, for example.

But the biggest change in terms of Tumblr’s overall vision, however, has to be the tags area. It’s no longer about you and your “likes” (those are under your profile now) – it’s about discovery. The tags area is kind of odd, though. There’s just a search box and photos below. It feels very experimental. Without any context, why would I click on a photo of a manatee, for example, or a photo of a golden gun on a pink background? Even in my Reddit Pics app, there’s at least a caption to pique your interest. It would make more sense if these photos were overlaid with a small tag, given that they’re being highlighted like this.

Tags notwithstanding, overall, Tumblr has delivered great update for what had been a stagnant app for far too long. Well worth the download.