In a report being released today, measurement firm comScore says that unique visits to social networking sites have increased by 6% year-over-year. The company also re-confirmed that Pinterest remains the fastest-growing social network as of Q1 2012, and its users rival only that of LinkedIn in terms of buying power.

These figures were a part of comScore’s latest “State of the U.S. Internet” presentation, which was first revealed via private webinar this afternoon, with a full report expected to be made public on comScore’s website next week. In addition to measuring social networking growth, comScore also detailed trends in mobile, online advertising and e-commerce.

The presentation began with a look at how the U.S. population relates to the rest of the world, before diving into other data. Today, the U.S. only account for 13% of the online population, down from 66% in 1996. However, the population is growing and remains engaged. 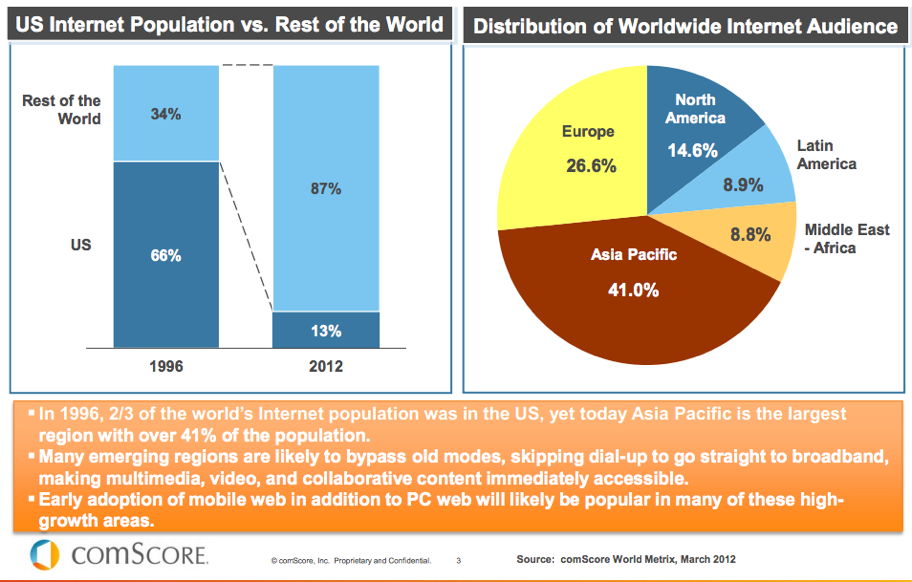 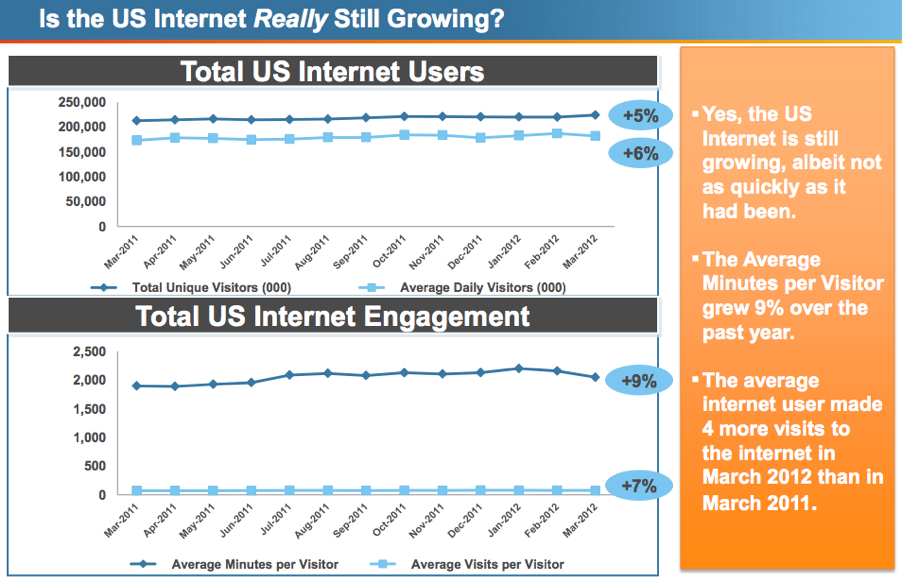 Pinterest’s growth was calculated using both unique visitors and clicks from search engines, said comScore, and it was found to be the fastest growing network in both categories. The network saw +4377% growth between May 2011 and May 2012, the firm reported. Meanwhile, Twitter grew less than 100% (58%). LinkedIn grew 67%, Tumblr 168%, and Facebook 4%. However, Facebook had the highest amount of reach during that same time by a longshot. Pinterest users were found to spend more, buy more items and conduct more transactions online than other social media buyers, but brands are still working out how to integrate their presence into the site for now. 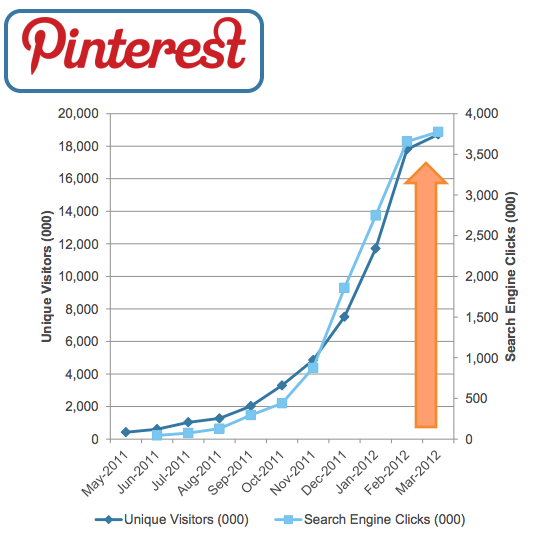 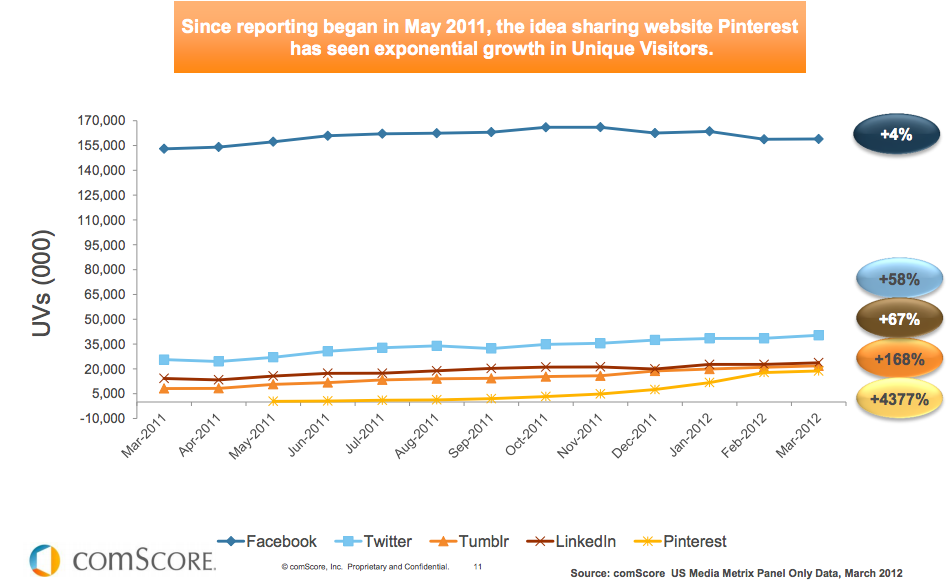 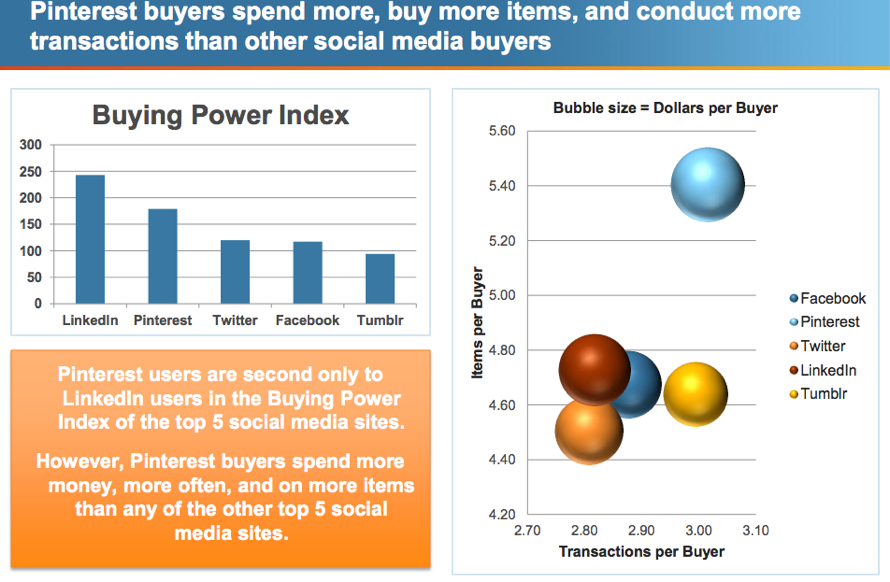 The report also examined the growth in mobile, and predicted that the number of mobile Internet users would surpass desktop Internet users by 2014. There’s been a 47% increase in smartphone users (106.7 million, or 45.6% of U.S. mobile population) between March 2011 and March 2012, said comScore, and Android now has 51% of smartphone market share, up from 35% last year. 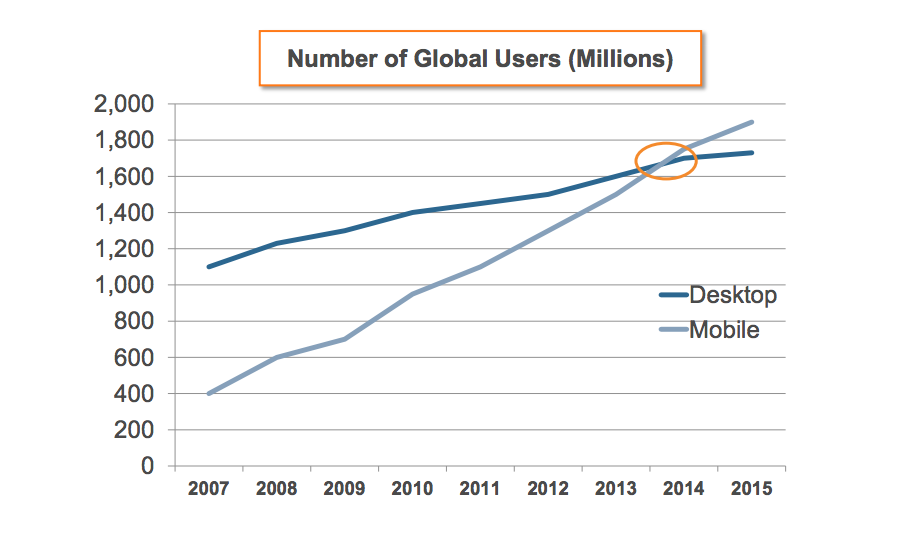 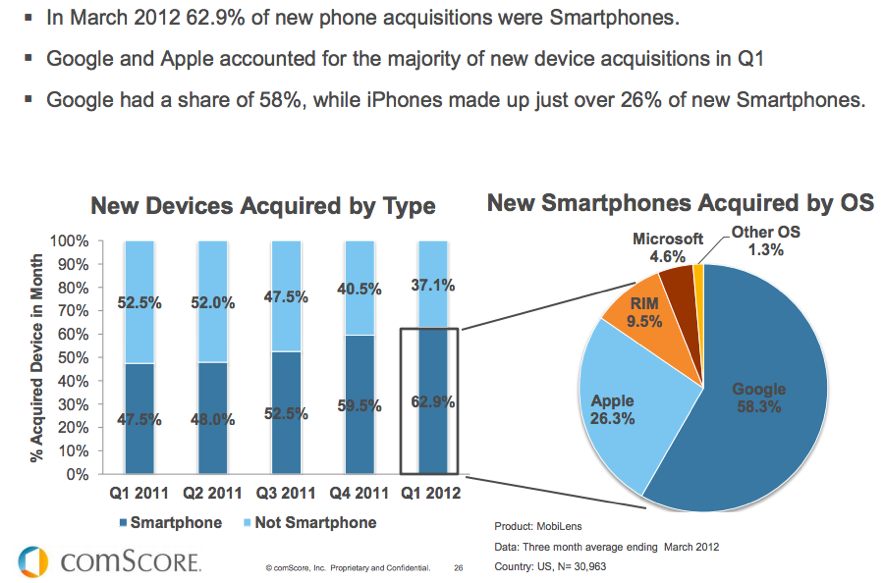 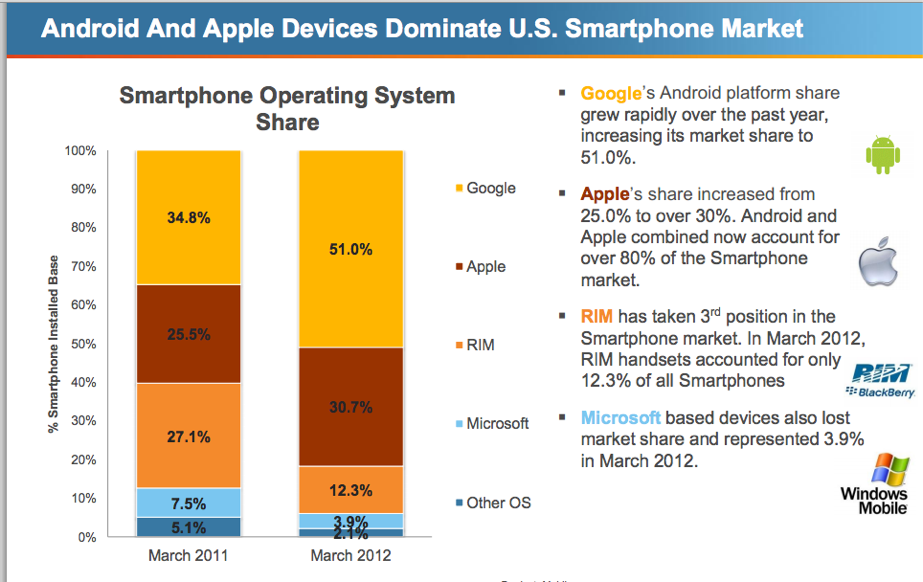 Thanks to smartphone growth, more mobile users are doing things like reading digital books and magazines. Fifteen percent of all smartphone owners did so during March, 38% with Amazon.com’s apps, 19% with Google’s, 16% with B&N or iBook apps and 11% via eReader.com’s apps.

Switching over to e-commerce, comScore found that Amazon, Apple, Walmart, Target and Netflix were the top retail sites in Q1 2012, and that Amazon in particular has seen nearly 30% growth in unique visitors year-over-year. In terms of monthly uniques, Amazon was top and Apple ranked second. 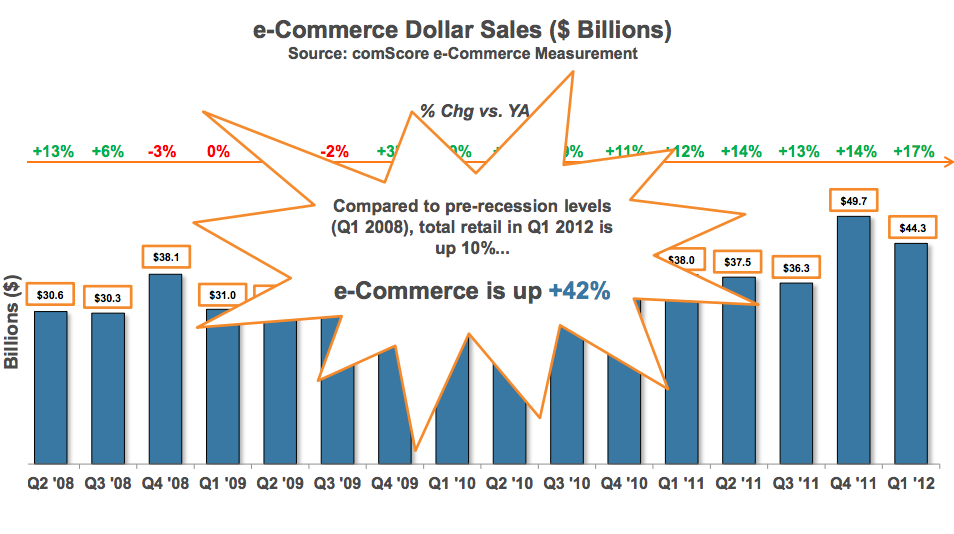 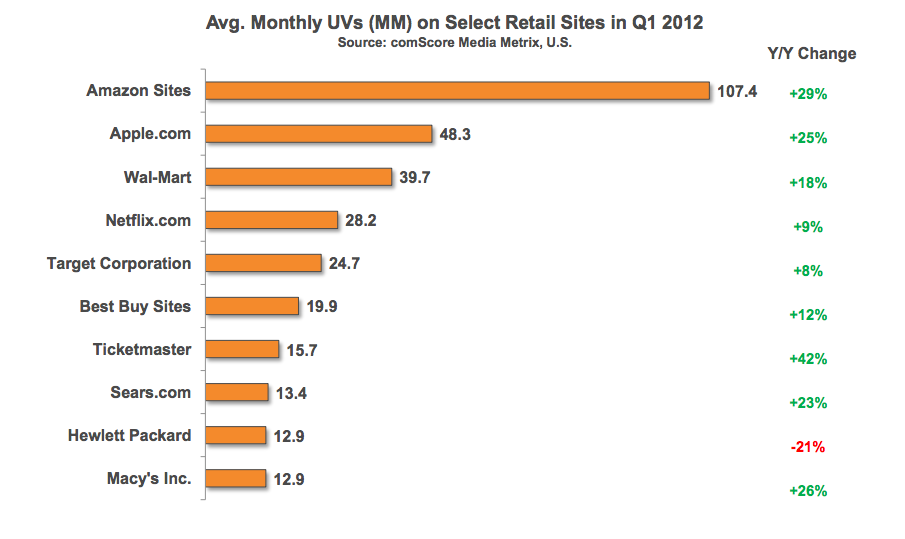 Online shopping has been impacting brick-and-mortar sales, too, thanks to what comScore dubs “showrooming,” which you know as the process of using offline retail stores to look at products up close, then buying online. Thirty five percent of people told comScore they had “showroomed,” but chose to buy online for better prices. Urban living was also cited as factor in this. Fifty percent of those engaging in this practice were 25-34 years old. The most popular categories for showrooming are consumer electronics and apparel, including both clothes and accessories. 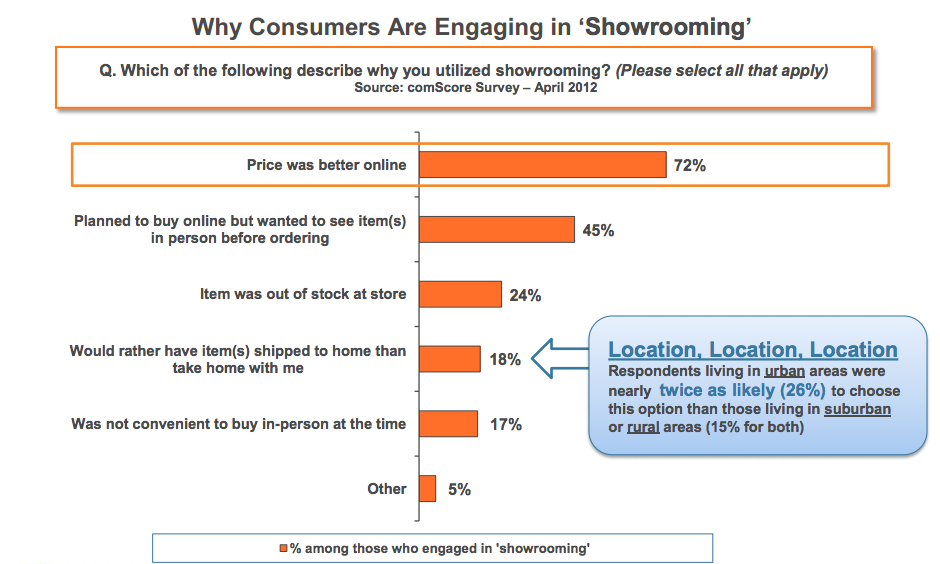 On the online ads front, comScore found that AT&T, Microsoft, Experian, State Farm, and Weight Watchers were the top online advertisers in March. AT&T was by far the largest, with 9 billion impressions. The firm predicts nearly 18% growth in online ads for 2012. 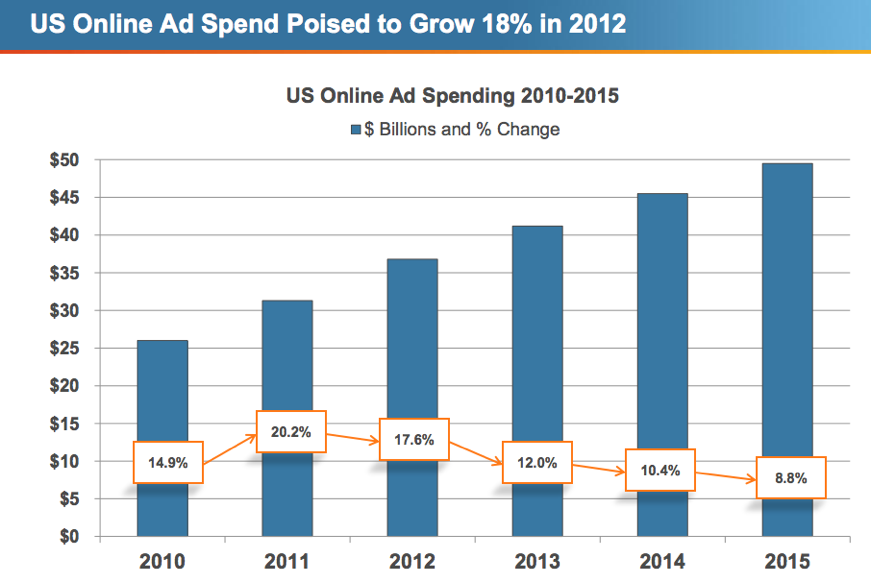 It also found a rise in viewing of longer form video ads, but monetization was still a challenge. In March, 45.4 billion videos were viewed by U.S. users, averaging 243 video per viewer, and representing 33% year-over-year growth. 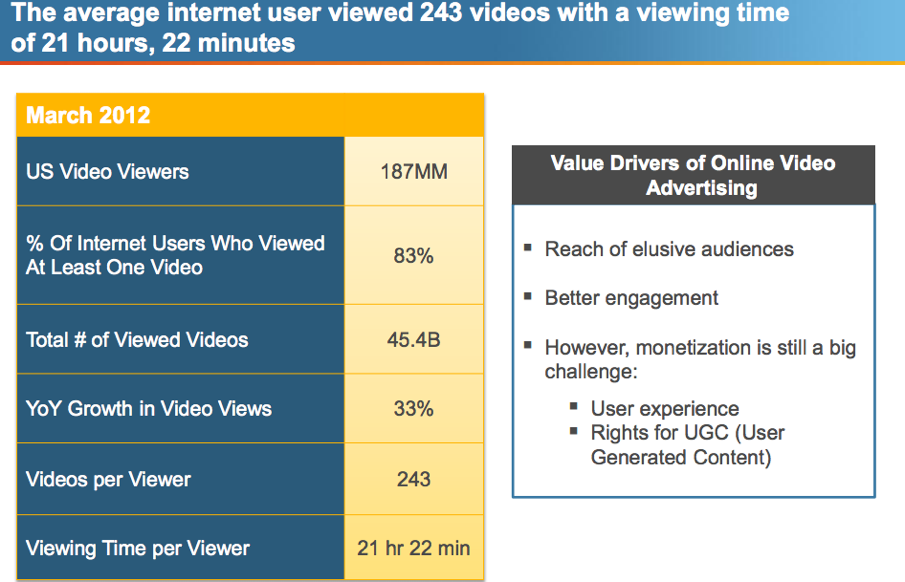