At this week’s WWDC, Apple introduced a new application called “Passbook,” meant to function as an organizer for all your passes. It supports store cards, gift cards and coupons out of the gate, replacing their plastic counterparts, and providing an Apple-approved way to get consumers paying at checkout with their mobile phones. At first glance, it seems that Passbook’s launch is bad news for mobile wallet players like Square, PayPal, and others.

But it might actually represent an opportunity for everybody else.

Besides the gee-whiz factor of having scannable cards organized in a pretty interface within the iPhone, the most interesting thing about Passbook is that the digital cards are able to make use of the iPhone’s geolocation capabilities. “When you get to the movie theater, your ticket automatically pops up on the lockscreen,” explained Scott Forstall, Apple’s SVP for iPhone software, demonstrating how a Fandago movie ticket in action. 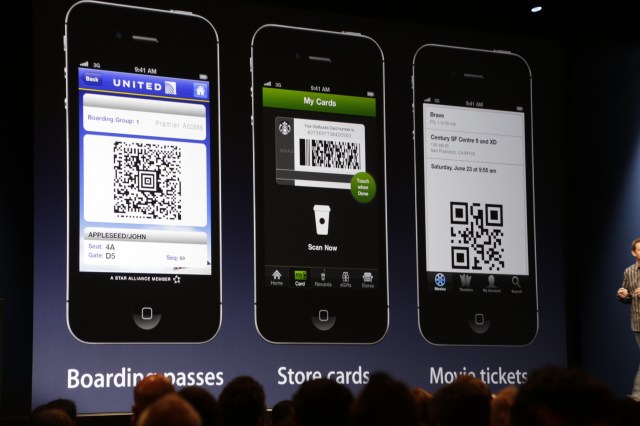 “So if I have my phone locked, and I go to my favorite Starbucks, up comes my Starbucks card,” Forstall said, showing off the Starbucks Card integration, “slide across it, brings up my card, scan, pay for my coffee and I’m out.” (He’s sliding his finger across the lockscreen alert to reveal the card. You can watch the demo here around minute 93:00 of the presentation.)

For now, the cards feature scannable barcodes, much like the standalone Starbucks app available in the app store does today. And after you scan your Passbook “card” via the store’s barcode reader, the balance immediately updates and the change is reflected in the digital card within the app.

What jumped into my mind, however, when Forstall talked about the location-based features of Passbook – the way cards are triggered to launch as you walk into various stores – is how much this feature resembles Square’s “Pay with Square” application (formerly known as “Square Card Case”). For this reason, some may speculate that Passbook will eventually morph into a mobile wallet, and therefore, a “Square killer.”

For background: this year, Square introduced a hands-free payment feature in its iOS app which allowed users to opt-in to a geofencing feature in the app that was triggered when you and your phone were within 100 meters of a Square merchant. The feature is not necessarily obvious to new users. By default, you must launch your “tab” in the Square merchant’s card, then you can say your name at checkout to pay via Square without handing over your credit card to the merchant. 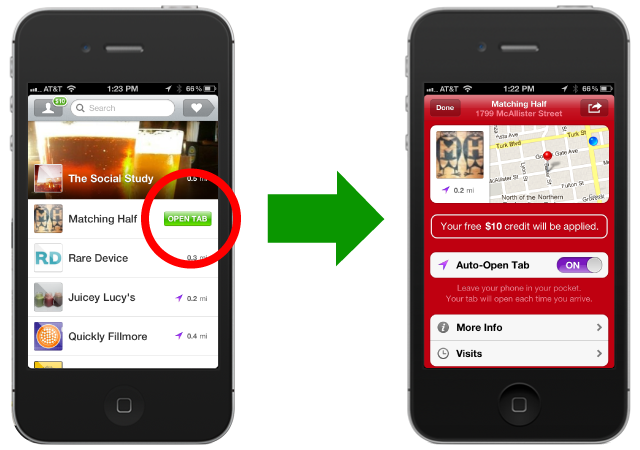 However, if you choose to opt-in to geofencing, you can configure Square to open your favorite merchant tabs automatically by toggling the “Auto-open Tab” setting to “On” within each merchant’s card. Enabling this feature merchant-by-merchant is a bit tedious for Square users, though; Apple’s solution of lockscreen alerts is much more elegant. And of course, this is because of Apple’s ability to integrate its own application deeply in the OS. In fact, Forstall said this repeatedly during the presentation: Passbook integrates.

“There are a lot of really great apps in the App Store that are starting to put passes – boarding passes and tickets – into the apps,” Forstall said. “But the problem is when you get to the movie theater or to the airport, you have to fumble around to find the app and then the ticket or pass within the app. So Passbook takes all these passes and combines them together into one place, and integrates it right into the OS.”

So what Apple has done, in a sense, is take the functionality provided by Square – geofenced cards that appear when you walk into a store – and make it a more deeply integrated, and therefore, a simpler and more elegant, solution.

But Will Passbook Become A Square/Mobile Wallet “Killer?”

With this in mind, it’s hard not to speculate at the greater agenda at play. Is Apple building a Square killer? Is it setting the stage for a mobile wallet?

Via Passbook, Apple has placed its tiny toe into water that is the mobile payments ecosystem. The app serves as a way to warm up the Apple userbase to the idea of using their phone at checkout to pay for things. The feature is rudimentary for now. It requires barcodes, which are sort of a stopgap solution in between the credit card era and the mobile-phone-as-payment-mechanism era — much like the Square dongle is a stopgap solution in between using credit cards and simply saying your name at checkout. And, Passbook only works with closed loop systems for now (users paying merchants using merchants’ own cards). Nowhere did Apple mention support for MasterCard, Visa, Discover, or AmEx, you’ll notice.

But all those players are busy building their mobile wallets and payments infrastructure of their own. Some, like MasterCards’ PayPass and Visa’s V.me, are betting big on NFC and will work with NFC-enabled POS terminals. Google Wallet is also using NFC. Meanwhile American Express recently introduced its Serve iPhone app for mobile payments.

Is Apple preparing to battle them all? And if so, then why didn’t Apple launch a full-on mobile wallet of its own? Why build a halfway-there solution like Passbook?

Why Apple Didn’t Launch Its Own “Real” Digital Wallet

For starters, it’s no simple matter to begin integrating these complex open loop solutions into the iPhone while simultaneously teaching users how to use their phone at point-of-sale. But another reason for Apple’s hesitation to launch a “real” mobile wallet is the current chaotic situation in the mobile payments industry today. Apple may simply be hedging its bets by not going full steam ahead with open loop payments, despite its access to 400 million credit cards thanks to its iTunes userbase, because there’s no standard solution out there right now.

If NFC becomes the default, that would involve new hardware (i.e., NFC chips) getting installed in Apple iPhones. (A wallet app would make more sense as a feature in a new iPhone. Clearly, Apple has been thinking about this possibility, based on its patent history). Or if NFC fails to gain traction, another mobile payments player like Square or PayPal might succeed in its place. Apple may want wait until a victor in the space is apparent, and then make its move to support whatever technology or standard is agreed upon as the most widely used and accepted.

(Oh, and all this is just in the U.S., mind you. Each geographic region may be crowning its own mobile payments victor in due time. Yikes.)

Apple Could Partner, Not Kill

It’s not a given that Apple will move into mobile payments itself. The company may very well be content to build a platform that supports third-party integrations, much like how Passbook functions today. For example, it’s easy to imagine how an Apple/Square partnership could work, if Apple opened up to supporting third-party mobile payment integrations.

Apple and Square are already partners in a sense: Apple sells Square readers in its stores, so it’s not a huge leap to think of how Square’s merchant install base could help Passbook/Apple Wallet get off the ground more quickly if Apple went this direction. It would be more like cementing the Apple/Square relationship that already exists by announcing that you can now save your favorite Square merchants’ cards within Passbook. Square could make Passbook/Wallet better, so why try to kill it? However, from what we’ve heard, partnership discussions between Apple and Square have not yet taken off, if they ever do.

Passbook doesn’t necessarily pose a threat to Square — or PayPal, the banks, MasterCard, Visa, or any other mobile wallet provider — so much as it serves as a potential opportunity. Through future partnerships and integrations with a forthcoming Passbook-turned-Wallet, all those players may have the ability to embed themselves more deeply into the iOS operating system than they ever could if they went at it on their own via standalone apps. And that’s a win-win-win. Mobile payments companies get increased exposure and access, Apple gets to snag its cut of transactions, and consumers finally get a mobile wallet that works.