Yesterday, Apple revealed the latest version of its iOS operating system, iOS 6, which promises over 200 new features. On stage, Apple presented a subset of these, touting new additions like an improved version of Siri, Facebook integration, a new phone app, FaceTime over 3G/4G, an updated version of Safari with iCloud Tabs, a new version Photo Stream, the introduction of PassBook, Apple Maps, and more.

But now folks are uncovering a few more gems, as screenshots and videos from developer builds of iOS 6 leak into the wild. Below are some of the more minor (but still notable) features we’ve found.

iOS 6 has introduced a whole new “Privacy” section under the Settings app, where users can control which apps have access to location services, contacts, calendars, reminders and photos. It’s a surprisingly simple fix to the whole “address book-gate” issue from earlier, but also comes at a time when Apple and other mobile players are under increasing scrutiny from government regulators about how mobile apps are accessing personal data. The solution, for now at least, is to put the burden of privacy management on the user. Don’t want apps digging into your data? Just head into the privacy section and switch access off. (via/image via Cult of Mac, iDownloadBlog) 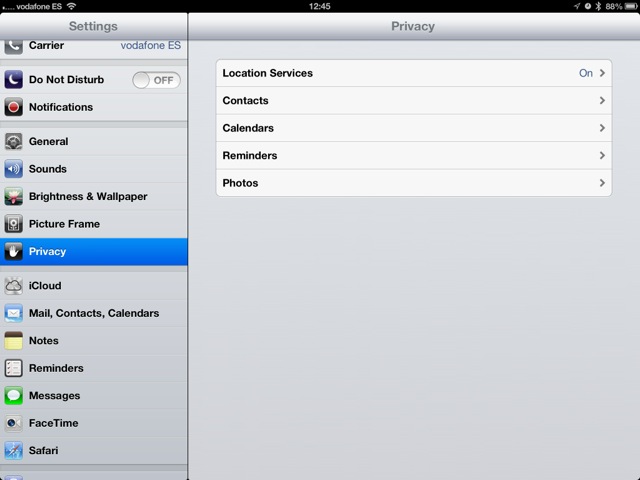 Related to the above, apps also ask the user’s permission before allowing third-party apps to access contacts, calendar, reminders, or the photo library. (Sounds like there will be a lot more first-launch pop-ups, unless developers will be permitted to combine the dialogs.)

There’s now a new widget in the Notification Center (the pull-down menu) that lets you Tap to Tweet or Tap to Post (to Facebook) without having to launch the respective app. The interface for Twitter posting looks familiar – it’s the same dialog box you saw when tweeting from apps in iOS 5, but now it and Facebook are available in the Notification Center for easier access. (via/image via Applenapps)

A subtle, but cool little feature here – the status bar in iOS 6 now changes color to match the theme of the app you’re using. Not all apps are supported yet, so this appears to be a feature a developer has to enable on their end. Looks good, though. (via/image via Cult of Mac) 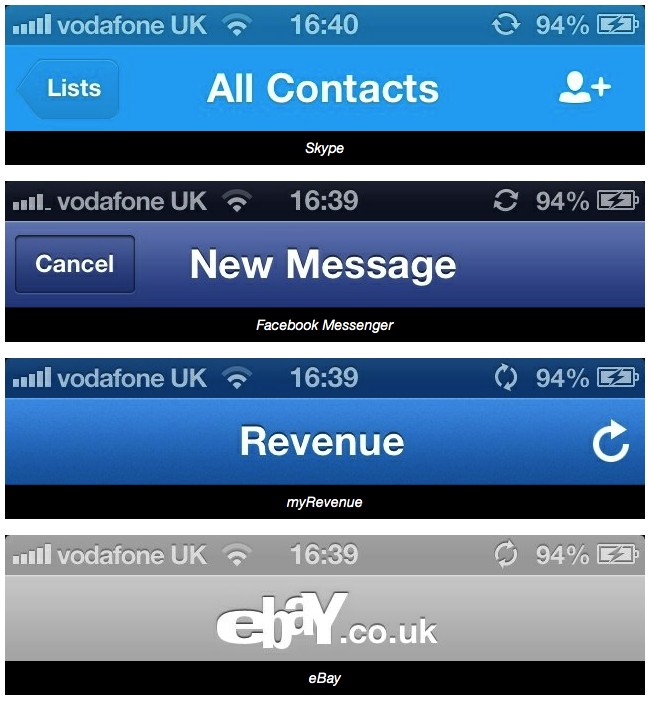 The iPad now has access to the World Clock and Weather apps and widgets, which had previously been iPhone-only. (via/image via iPadJailbreak) 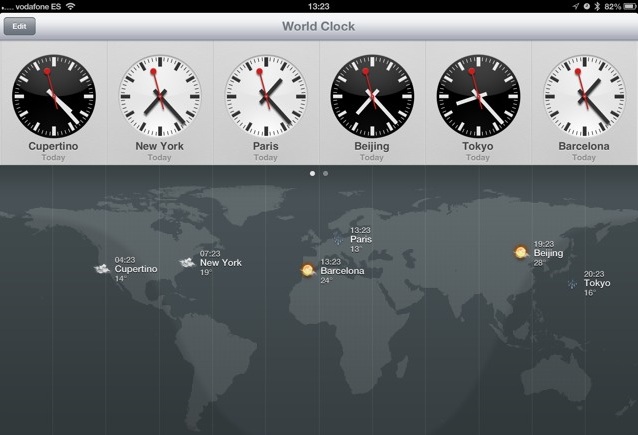 Previously, music stored in iCloud via the iTunes Match service would play, but it wasn’t technically “streaming” because the song downloaded to your device. In the iOS 6 beta, the song immediately begins playing, but downloading is a separate option. This essentially means that iTunes Match is now a cloud streaming service, not a download service. (via/image via Applenapps) 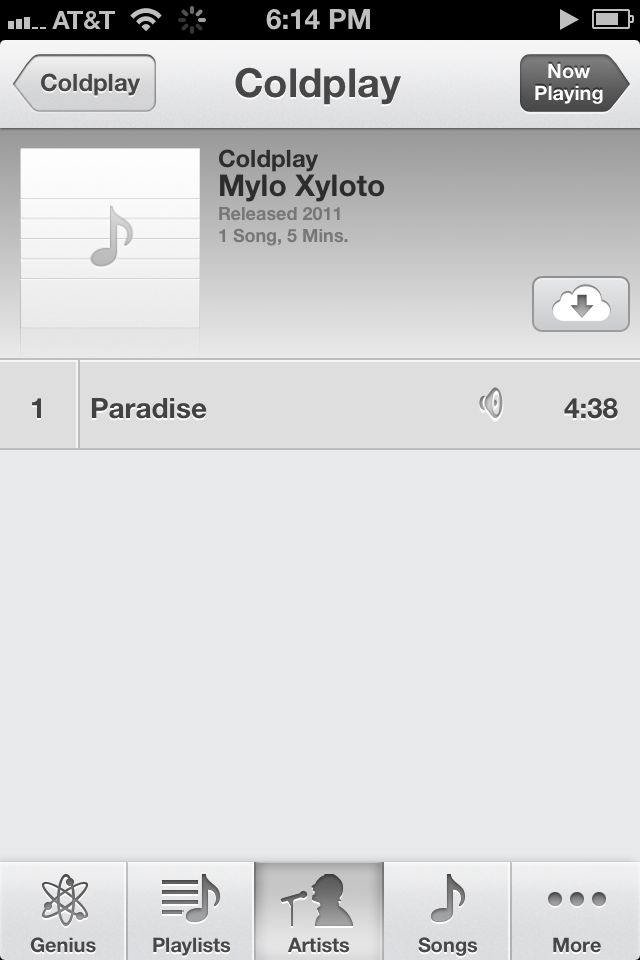 All three of Apple’s on-device stores have gotten a makeover, and include a sliding top banner with sliding sections for their featured apps or media. The theme is now black, and for apps, the reviews, app details and related apps now appear at the top of the listing. You can also see in-app purchases, share apps via email, Facebook or Twitter, copy the store URL and Facebook “like” items. Another nice addition – you can finally purchase an app without leaving the store. The download just begins and shows its progress, while you continue to browse. Apps also have a tiny “new” banner until their first launch.  (via Applenapps)

This was briefly mentioned by Apple, but here’s a little more. The new VIP mailbox which lets you whitelist certain contacts as “VIPs” (the boss, e.g.) also lets you customize your notification settings to only alert you when a particular person sends you mail. You can configure this by email account too, or allow certain mail alerts through the Do Not Disturb feature. (via/image via Cult of Mac) 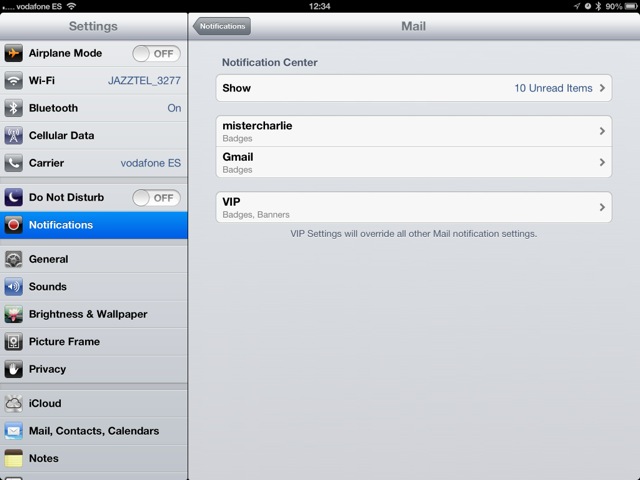 Here’s something interesting directly from the developer documentation:

“Apps that do not incorporate their own map support now have an easier way to launch the Maps app and display points of interest or directions. Apps that offer routing information, such as turn-by-turn navigation services, can now register as a routing app and make those services available to the entire system. Registering as a routing app gives you more opportunities to get your app in front of users. Routing apps are not limited to just driving or walking directions. Routing apps can also include apps that provide directions for the user’s favorite bicycle or hiking trail, for air routes, and for subway or other public transportation lines. And your app does not even have to be installed on the user’s device. Maps knows about routing apps in the App Store and can provide the user with the option to purchase those apps and use them for directions.”

Apps can now offer purchases of iTunes content directly within their own interface (no more redirects). This includes apps, music, books or other iTunes content. Developers will identify which items they want to make available for purchase in their apps, but the transaction will be handled by the Store Kit framework.

iAd, Apple’s advertising platform, allow developers to earn revenue by displaying advertisements within their apps. The ad will take over a part of the app’s user interface and will help generate income when users view or click. Now in iOS 6, there’s a new medium-sized rectangle banner size designed for iPad.

Whoops! Not new. Here’s what a developer tells us is new:

“The Event Kit framework now includes interfaces for creating and accessing reminders on the user’s device. The reminders you create show up in the Reminders app along with ones created by the user. Reminders can include proximity or time-based alarms.”