Feature phones are not the future. Of course that verges on tautology; of course everyone will have a smartphone, until everyone has something smaller and better and even more integrated into the fabric of our lives, like Google Glasses or cybernetic jawbone/retinal implants or whatever Charles Stross dreams up next. But when, exactly?

I’ve spent a good chunk of my life wandering around and writing about the developing world, and as lots of folks have recently argued, that’s still feature-phone territory, and will stay so for the foreseeable future. OK. Fair enough. But when precisely does the foreseeable future end? Because when the smartphone revolution hits the developing world, that’s when things are going to get really interesting, because it will also be their computer revolution and Internet revolution, all at the same time.

I’m particularly interested in sub-Saharan Africa (and it seems I’m not the only one around here) but it’s particularly hard to make predictions about the region, in large part because you still have to take all the statistics that come out of there with a sizable grain of salt. That said, here are a few interesting nuggets. Current smartphone penetration estimates range from 3% to 17%, but I’m most convinced by Samsung’s estimate of ~7%, up from 5% last year. Doesn’t sound like much, does it? But: 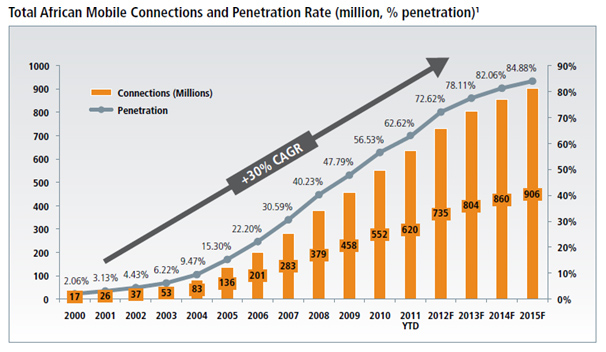 So if smartphone adoption in Africa follows the same path as dumb/feature-phone adoption, then right now is the rough equivalent of 2003, and smartphones will be 15% of the African mobile market in 2014, 23% in 2015, and 40% five years from now. A significant minority, but still a minority. Right?

Except that a whole cluster of factors make me think that rate of smartphone adoption in Africa will leave the rate of feature-phone adoption in the dust. The distribution channels are already mature and thriving. No-contract $100 Android phones are already competing viciously, eg Samsung’s new Galaxy Pocket vs. Huawei’s IDEOS. Smartphones are more desirable than dumb/feature phones were – again, they’re three revolutions rolled into one.

And, most importantly, sub-Saharan Africa is much wealthier than it was ten years ago. As The Economist points out, most of the world’s ten fastest-growing economies both to and since 2010 lie south of the Sahara.

So here’s my prediction: in five years’ time, most sub-Saharan Africans will have smartphones. Too optimistic? I don’t think so; after all, from 2003-2008, basic mobile-phone penetration went from 6% to 40%, and I believe the above is a fairly convincing list of reasons to believe that smartphone adoption will outpace that. Still, it’s quite an extraordinary thought.

The company who builds a 1st world smartphone for a 3rd world network gets the next billion users. http://t.co/Ci1jtjRx

The West still tends to think of Africa as a sea of unending poverty, violence, and despair; pretty soon, though, it may have no choice but to start thinking of it as a lucrative market. Half a billion users here, half a billion users there, pretty soon it adds up to some serious money. App developers, take note.