It’s that time again. Well, who are we kidding? It’s always time for iPhone rumors. This one, however, seems to be the rumor that just won’t quit. So will the next-gen iPhone have a larger display? According to AppleInsider‘s supply chain source, Mingchi Kuo (an analyst with KGI), all signs point to yes.

He expects the iPhone to be taller, and switch from a 3.5-inch 4:3 display to a “4.08-inch in-cell IPS panel screen with a display resolution of 1,136 x 640 and 500-nit brightness,” at an aspect ratio of 16:9. If this is true, Apple will actually be lowering the bar for its Retina display status. The pixel density for the rumored display is 320 ppi, whereas current iPhone models sport a ppi of 326. Obviously this isn’t a huge drop, but I think it’s worth noting the concessions Apple may or may not be making to keep up with the competition (read: Android phones).

This stands to be the biggest change to the iPhone’s design to date, rivaled only by the jump between the 3GS and the iPhone 4, if it turns out to be real. That said, there’s quite a bit Apple will have to consider.

The company insists on ease-of-use as a cornerstone of every product. The major complaints with large screens is that they kill battery life and make one-handed actions more difficult. Apple won’t have this, which is why a 4-inch display is somewhat believable. It rubs right up against that “too big” line, which in my opinion sits at 4.3-inches. And even a 4.3-inch display is too big for some, but 4 inches should be comfortable to everyone from teenage girls to Occupy Wall Street protestors to lumberjacks. (You know, Apple’s core demographic.)

Now, Apple already gets an earful when it comes to battery life. Competitors are kind of kicking ass in the battery department when weighed against the iPhone (at least, lately). The Droid Razr Maxx: 3300mAh battery. The HTC Evo 4G LTE: 2000mAh battery. The Samsung Galaxy S III: 2100mAh battery. Granted, the Evo 4G LTE and the Galaxy S III are much larger devices, with 4.7-inch displays.

According to Kuo, there’s a point at which a display requires a “visibly larger” battery capacity, and that point is around 4.3-inches. However, if we assume that Apple will toss in a 4G LTE radio this time (which makes sense considering it’s now a proven technology, within the iPad no less) then Apple sticking to a ~1400mAh battery seems a bit off. Obviously a compromise between size and usability must be made, but battery life is one of the most important specs on a phone, so it’s at this point that I feel the research may be a bit misguided.

But let’s move on anyways.

Kuo also mentioned that the horizontal resolution would stay the same, at 640 pixels. This is to make sure legacy apps are still usable on the display, and also help app developers save on adapting their apps for a different aspect ratio. So, according to Kuo, legacy apps would be pillar-boxed if they aren’t optimized for the longer display, but if developers want to refine the apps for the new display they won’t have to tamper much with horizontal resolution, just vertical.

Just take a look at this image pulled from the research note: 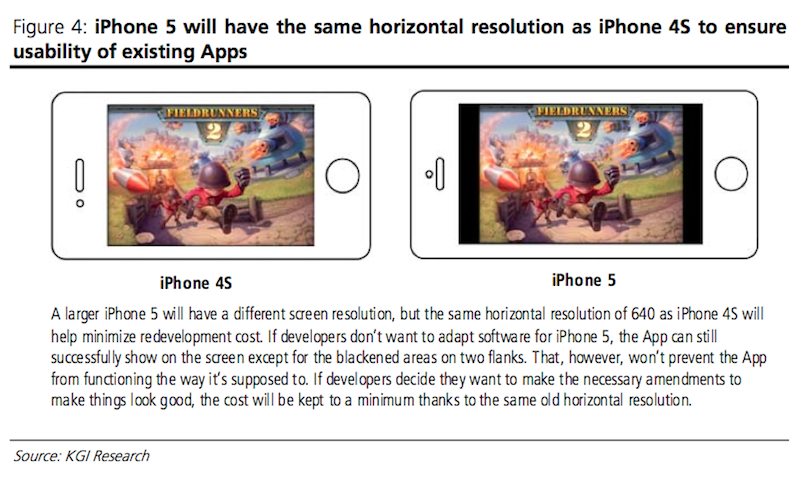 Finally, Kuo made the somewhat unrelated point that he finds it “not likely” that the purported leaked cases we saw last week, the ones with microUSB ports instead of 30-pin ports, are real.

Kuo has been spot-on before, so I’m swallowing this report with only a moderate serving of salt. Plus, we’ve seen this rumor sprout up just about everywhere. But it’s also worth noting that Jobs swore against any display larger than 3.5-inches.

We won’t know anything for sure until Apple unveils the next iPhone, but we’ve seen this “bigger display” rumor pop up over and over again, so I suggest you go ahead and brace yourself for it.