Bespoke Post, a new e-commerce startup using the subscription-based “box of the month” model, is making a splashy public debut next week thanks to a new partnership with Details magazine, a Condé Nast property. Although the service has been open to the public since the beginning of April, the deal with Details is going to put the subscription club for men in front of a much wider audience.

The company is also currently in the processing of raising a seed round of $500,000 which is now half-closed, we’re told, with 500 Startups, Fabrice Grinda of OLX, Jose Marin of IG Expansion, and other angels on board.

A participant in NYC’s Entrepreneurs Roundtable Accelerator (ERA), Bespoke Post made a hard, 11th hour pivot from its original idea, which was a mobile advertising play called Nabfly. According to Rishi Prabhu, who co-founded the company with Steve Szaronos, Nabfly had paying customers, but they just weren’t passionate about the business. With less than a week before ERA’s demo day, the team shifted gears and Bespoke Post was born.

Although playing in a crowded space, Prabhu believes that Bespoke’s (hilariously titled) “Box of Awesome” has a shot at becoming a standout in the subscription-based commerce business.

“There’s a big opportunity in the curated space for men,” he says, “and brands think so, too.” 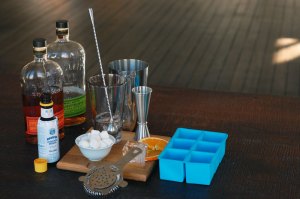 So what makes Bespoke’s “Box of Awesome” so…well, awesome? For starters, it’s not samples, but full-sized products. The cost is reasonable – at $45/month, it’s basically equivalent to a gym membership. Boxes are themed (recent examples include a shave kit, a travel theme, and a high-end Japanese cocktail set). Also, unlike many subscription services, you can see what the box will contain ahead of time, then opt whether or not to skip it that month.

The retail value of the boxes is around $70, but Bespoke keeps the costs low by negotiating deals with brand partners who see a service like this as a marketing channel.  However, Prabhu notes that getting a discount on something doesn’t automatically mean it’s going in a box, he says. “Our goal is turning [our customer] into the most interesting man in the world, one box at a time,” he says. It’s a process which involves curation, not only by the founders, but a panel of experts who weigh in on the items under consideration.

Prabhu says that Bespoke Post is approaching a $1 million annualized run rate. (The company asked us not to reveal subscriber numbers, but you can do the math). He also claims a low churn rate, too – under 5%, but again, he won’t reveal specifics. Of course, it’s too early to say a low churn will always be the case. No one even knows if subscription-based e-commerce will last, period, much less who the winners (if any) will be.

There are a wide variety of offerings like Bespoke Post out there already, which aim to offer serendipitous surprises every month, but many of the services targeted directly at men are focused on a single vertical like clothing, grooming, or other necessities.

With the new deal with Details, Bespoke Post will be launching several co-branded boxes which will also be featured on the pages of Details’ printed magazine. (See image on right). Other media properties and publishers are lined up in the coming months, the company says.