Not even a month after news of Fab.de’s growth in Germany and Austria (revenue reaching 1.5M Euro per month), the company is today announcing its expansion across Europe. Starting now, Fab is available across 13 more European countries as an English or German-language website. In addition to the U.S., and the two markets served by Fab.de, that brings Fab to 16 countries worldwide.

The additional countries coming on board today are Belgium, Czech Republic, Estonia, Finland, France, Ireland, Luxembourg, Netherlands, Romania, Slovakia, Slovenia, Spain and the U.K. These countries will be directed to the Fab.de domain, not the U.S.-based Fab.com website. However, Fab CEO Jason Goldberg tells us that the plan is to consolidate the domains under the Fab.com URL in the next few months. Plus, following today’s expansion across the EU, Fab will add three more countries to the list next week: Sweden, Poland, and Cyprus.

Why the focus on Europe now? “We think Europe especially has a great appreciation for design,” says Goldberg. “That’s why we launched first in Germany in February. We saw really fast growth across our German website – we had 100,000 members in February, we’re at 600,000 now in Germany. We’re doing nearly 15,000 orders per month…and we’re doing 50,000 Euro per day in sales in Germany today.”

Of the expansion, Goldberg also noted that there was already demand in the market, with some 30,000 users signing up for Fab in the U.S. and Germany from the other countries across the EU. To address the demand, Fab and Fab.de are sourcing products from the company’s design partners in both markets, as well as elsewhere in the world including countries like Morocco, India, Indonesia, Portugal, Spain and Italy.

In addition, Fab plans on making further strategic investments in the coming weeks to spread across Europe, meaning hiring and acquisitions of other companies. As you may remember, Fab.de grew out of the acquisition of Casacanda, a top flash sales site serving Germany and Austria.

Goldberg also notes that Fab is actively in acquisition talks with a few different companies, but nothing is in the deal stage yet.

For a site that didn’t even exist a year ago, Fab is seeing incredible growth, in part thanks to social and mobile. Now at 4 million members globally, 50% of members come from social sharing, Goldberg says, and 40% access Fab on iOS and Android devices. He says Fab is still on pace to do more than $100 million in sales this year in the U.S., with sales days of over $300,000. In Germany, Fab.de is doing 50,000 Euro/day, as noted above.

In the near term, Goldberg says Fab is focused on user growth, however, not revenue. In a few weeks, the company will be rolling out several new products to help achieve that goal, with a particular focus on social commerce initiatives.

Below, Fab.de orders by month: 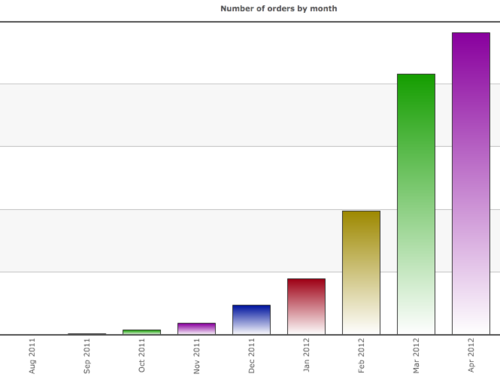