Citrus Lane, the Mountain View, California-based e-commerce startup that provides a subscription delivery service of products specifically for families with infants and toddlers, has raised $5.1 million in a new round of venture capital funding from GGV Capital and previous investor Greylock Partners.

The round serves as Citrus Lane’s Series A, and brings its total outside investment to $6.5 million (Greylock led a $1.5 million seed round for the company back in March 2011.) The new money will be used mainly to expand Citrus Lane’s full-time staff of 14 employees and build out its technology, co-founder and CEO Mauria Finley said in an interview this week.

As TechCrunch reported earlier this month, for a $25 monthly subscription fee Citrus Lane sends a box filled with four to five hand-selected baby and kids’ products based on the gender and age of the subscriber’s child. Typically, Citrus Lane’s selections have a green, eco-friendly, and/or organic slant. 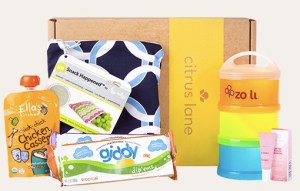 The company does not accept money from companies in exchange for featuring their products. Citrus Lane’s selection process is much like how magazines are sent hundreds of free products for review, but ultimately it’s up to the editorial staff to curate what is featured in the magazine each month, Finley explained. Companies often provide their goods to Citrus Lane for free or at a discount, since subscribers often become paying customers to brands they first discover through the service.

Citrus Lane has been shipping boxes since July 2011, and while Finley would not provide any specific usage numbers, she did say that the company currently has subscribers in every state as well as Puerto Rico. “Revenue has doubled since January, and will double again in June,” Finley said.

Talking to Finley, what was especially compelling to me (and something that I imagine attracted investors as well) is that Citrus Lane’s founders seem to be the full package: They have real technical and business chops, but are also women themselves who understand the needs of their customer base. Finley is a mother of two who graduated with a CS degree from Stanford before going on to work years in high-level positions at Netscape, AOL and eBay; her co-founder and CTO Claire Hough previously was in charge of hundreds of engineers in various roles as a senior technical executive at NexTag.

“We have a really great technology and quant marketing teams, and we are building all sorts of algorithmic understanding that we’re confident will run circles around other companies in the space,” Finley said. “But the secret and the heart of this is that we really believe in the customer, and we believe in the mission of helping moms find the right products for their kids.”

That combination is what Finley says will help Citrus Lane keep an edge in the increasingly hot and competitive market for parent- and family-focused startups. And of course, it’s a pretty crazy world out there for startups in general, so having some real heart in the game certainly always helps.