Cloud storage platform Box has long offered a web-based app directory that includes apps for services like Salesforce, and others that enhance the storage platform’s capabilities. And last year the company launched a platform for developers building off of the Box platform, called the Box Innovation Network (/bin). Today, Box is taking development and its app directory mobile with the launch of Box OneCloud, a mobile cloud for the enterprise that provides a suite of more than 30 productivity applications, allowing businesses to access, edit, and share content from their mobile devices.

Box, which now has over 10 million users with more than 200 million files accessed via Box each month, is a cloud storage platform for the enterprise that comes with collaboration, social and mobile functionality. Box has evolved into more than just a file storage platform, and has become a full-fledged, multi-platform collaborative application where businesses can actually communicate about document updates, sync files remotely, and even add features from Salesforce, Google Apps, NetSuite, Yammer and others. The company says 80 percent of the Fortune 500 are using Box.

As co-founder and CEO Aaron Levie explains to us, Box OneCloud is the culmination of several years of work. “We’re taking the idea that we are in the post-PC world and seeing how that fits in with Box,” he explains. And by the Post-PC era, he refers to the movement in the enterprise towards mobile platforms.

Box OneCloud represents the company’s vision for how businesses and their workers will access, edit and interact with documents on their mobile devices, including both smartphones and tablets. In basic terms, Box OneCloud is a new set of APIs and an all new directory for mobile that will introduce users to applications powered by Box within the Box interface. “This is how the enterprise use applications in post-PC world,” Levie says emphatically.

Today, the company is debuting 30 Box OneCloud apps that help users discover, create and share content from their mobile devices. Partners that will be launching apps include Podio, Quickoffice, Adobe EchoSign, Nuance PaperPort Notes and PDF Expert. With new APIs, content updates for each app are instantly stored and secured on Box. Partners provide a variety of services that are complimentary to Box’s storage offerings including advanced document editing, secure e-signature, digital note taking and PDF annotation.

All OneCloud integrations are accessible via a new Box mobile app gallery, enabling users to easily browse and download the catalog of Box OneCloud apps to their iOS device. 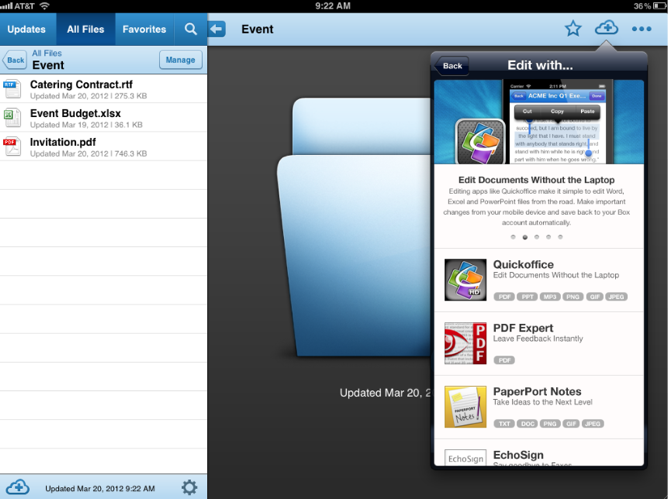 Here’s how it works: You open the Box app via the iPad, iPhone, Android, Android tablet or other device, click on a particular document, and then are given set of usability options based on the apps you’ve installed that work with Box. For example, you could download the EchoSign app, and use the digital signature technology for a contract stored via Box.

The Box OneCloud platform will also include a collection of new developer tools, making it easier than ever to build mobile application integrations with Box. The company says the new Box App to App Integration Framework significantly reduces the amount of time – from weeks to days – to develop apps with Box by integrating directly to the file management capabilities of Box’s mobile platform. Additionally, access to content stored in Box, including offline access, has been made seamless for developers.

Box OneCloud is available today for iOS and will be extended to Android soon, says the company.

Levie says the next iteration of OneCloud will see new types of apps emerge and built on top of the platform, similar to the way that many web apps have been built off of Box’s platform. As of November, Box had 4,500 API partners and was seeing 200 million API calls per month.

Armed with $81 million in new cash, Box is looking to break ground when it comes to cloud storage and mobile (and beat Microsoft at the same time). Mobile is a huge growth area for the company. Specifically, Box says it has seen eight times growth in total unique mobile users with Android growing at the fastest rate. And 77 percent of Box users access their content from six different locations and on at least three different devices.

As Levie tells us, “We want Box to be center of all business work flow and the go-to mobile business operating system.” It’s clear when talking to Levie, that he believes mobile is the future, and is investing heavily in products relating to cross-platform accessibility. 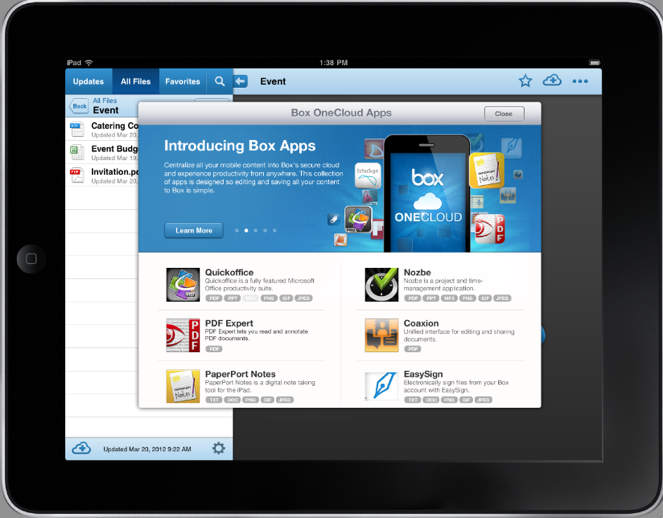