Cloud storage and collaboration platform Box is debuting a updated Android app today, which has been upgraded with a number of new collaboration features as well as support for several European languages. Box CEO and co-founder Aaron Levie tells us this is the biggest update to the company’s Android app since launch in 2010.

Besides a completely new UI, the app has been overhauled to support commenting on individual Box files from the app, and now includes the ability to invite others to view documents and files. The new app also supports multiple file downloads at once and features in-app progress notifications Box says they worked with Google directly to develop the new version of the Android app, which has now been localized in four new languages including Spanish, German, Italian and French.

All users who update or download the new Box for Android app in the next month will receive 50GB of free file sharing and storage for the lifetime of their Box account.

For Box, mobile is a huge growth area. The company tells us that it has seen eight times growth in total unique mobile users with Android growing at the fastest rate. And 77 percent of Box users access their content from six different locations and on at least three different devices. 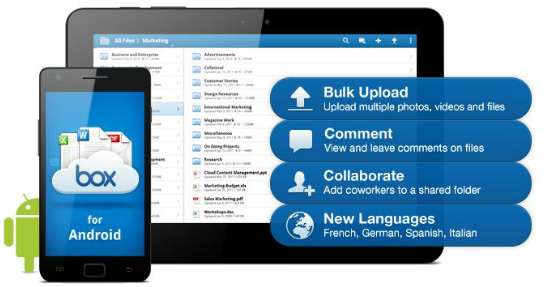