Sawbuck Realty, an online real estate broker, has just launched a new app called HomeSnap which lets you discover information about any home nationwide just by taking a photo of it. Using a combination of mobile phone sensors to determine location and orientation as well as MLS and public records data, HomeSnap can tell you everything about a home, including how many square feet it has, number of bedrooms/bathrooms, estimated price and more. And it can do so even if the house is not on the market. More importantly, the app is actually fun to use.

The company is also announcing the close of an additional $2 million angel round today, which adds to its previous $2 million round from 2009.

Sawbuck CEO Guy Wolcott tells us that the company currently has MLS data for 13 of the largest metro areas across the U.S. (think NY, DC, LA, Chicago, Boston, etc.) but plans to aggressively add more markets throughout the year. By year-end, it expects to be in 30 top markets across the U.S.

However, if you’re not in one of the regions where Sawbuck has MLS information on homes, the app can pull in data from public records. Currently, it has over 90 million homes in its database.

But what makes the app notable is the user interface. This is not another boring real estate app. It’s actually kind of fun.

“So many of the real estate apps are boring and utilitarian, explains Wolcott. “We looked at things like Shazam – things where you want to show your friends, and they say ‘how does that work?’ – and we tried to make something like that for homes.”

Under the hood, the app uses the iPhone’s sensors, like the accelerometer, gyroscope, and GPS, to determine where you are and what you’re looking at. Then the company’s patent-pending algorithms interpret that data to make a best guess as to which exact home you’re probably seeing. If the app can’t figure it out for some reason, it has a backup system that lets you pick the house in question with a tap.

“The real idea,” says Wolcott, “is to be kind of magical. You just take a picture, and it knows what you’re looking at.” 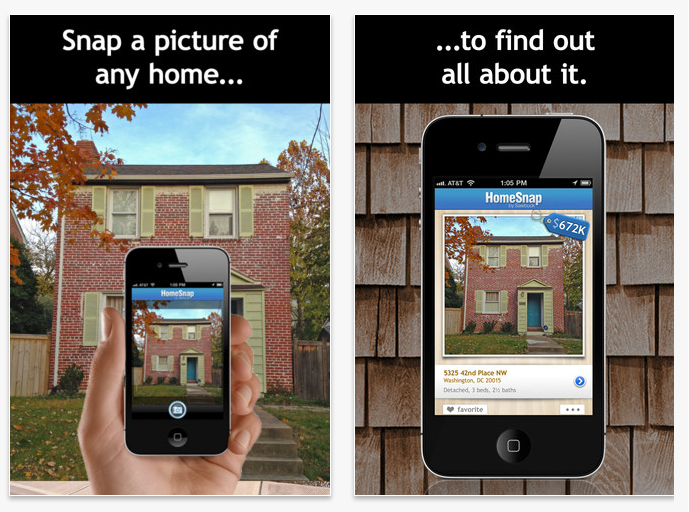 The app also keeps track of the history of your snaps, to help you remember the houses you’ve seen. This feature serves a two-fold purpose: one, to help consumers recollect their searches, and two, to help build up a crowd-sourced database containing pictures of homes.

In the future, the app could begin using image recognition, too, thanks to these crowd-sourced photos to better recognize the homes in question.

The app is clearly a competitor to industry leaders like Zillow (and its mobile app), but Wolcott says the HomeSnap app is meant to be used differently. Zillow is primarily about researching a specific home or neighborhood’s prices. HomeSnap, meanwhile, is meant more for serendipitous discovery and satisfying your immediate curiosity about a house you see. He also notes that HomeSnap’s access to real-time MLS data in particular markets is a key advantage.

The new app is available for download here from the iTunes App Store.