Last week, a Mountain Lion roared “Mac is the next big gaming platform.” Apple is bringing Game Center to Mac, it will support cross-platform iPhone vs. Mac play, and the Mac App Store will likely become more prominent. It’s time for mobile developers to decide if they’ll bring their games to Mac OS, and how they’ll port their controls and levels. Otherwise they risk having to claw their way up much more competitive charts.

Tomorrow, after 100 million downloads across platforms, ZeptoLab will release its hit Cut The Rope for Mac OS. After hooking me up with a pre-release download, the Moscow-based founders gave me the low down on the biggest challenges of porting to Mac OS, and why they think it’s critical that mobile developers don’t get left behind on the small screen.

[Update: Cut The Rope is now available on the Mac OS App Store]

“We see opportunity with the Mac App Store because it’s not as occupied as the mobile App Store. There are several quite nice games, but the competition is not as huge” said ZeptoLab’s twin brother founders Semyon and Efim Voinov. Angry Birds and Plants Vs. Zombies are already available, but other staples like Fruit Ninja, Words With Friends, and Where’s My Water are absent. Without these apps occupying the charts, there are places for other developers to swoop in and get discovered.

As expensive console and PC games like Call Of Duty and Star Wars: Knights Of The Old Republic appear in the store as well, paid apps ported from mobile may be able to get away with charging higher prices. On a phone $5 may seem steep, but the bigger screen size and history of $50 disc-based games may make $5 appear cheap on the Mac App Store.

“We started quite a while ago doing this in-house. It took a bit longer than we expected, but from a technical standpoint the process of porting to Mac was pretty straightforward. The tools are pretty good. The majority of work was on the design and art side.”

From Touch To Trackpad

In Cut The Rope, users cut ropes attached to pieces of candy, working with gravity, momentum, and other forces to guide the sweets into the mouth of a hungry baby dinosaur named Om Nom.”It was challenging porting to Mac OS, because Cut The Rope was intended for touch controls” the Voinovs admit. 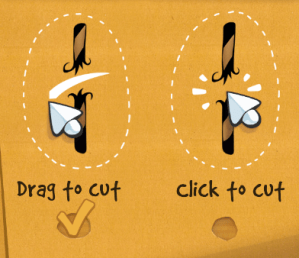 “It’s tricky to move from one point of the screen to another very quickly. It’s pretty natural with fingers, but different with the mouse.” When the game was ported to HTML5, some laptop users reported difficulty holding down the mouse click button while using another finger for precise movements.

To keep the original feel intact but give players an optimized control scheme for the track pad and mouse, the Voinovs added the option to hover near a rope to highlight it and click to cut it, rather than swiping. If it helps, users can leave it on, or disable it if they find it too different from the mobile version. During testing, the team noticed that levels where you had to make several quick cuts could leave users cursing the controls. To compensate, they made the physics of the Mac version work just a little slower.

Developers should determine which controls might be harder with a mouse and consider adding similar options, keyboard shortcuts, or on-screen buttons that make use of the extra real estate. If those aren’t enough, similar tweaks can be made to a game’s physics to reduce player frustration.

Meanwhile, many of Cut The Ropes levels were designed for a portrait orientation screen, while most Mac monitors stay fixed in the landscape position. The Voinovs took a methodical approach, playing each level of their mobile game and noting which were too tall and would need lay out adjustments. “We realized it was more half of the levels”, making level redesign a significant time-suck. Other devs should factor this into their decisions to port and release schedules.

Bigger screens also require higher resolution artwork. Rather than seeing this as busy work, ZeptoLab took the chance to differentiate the Mac OS experience. “We made sure it would look great, really crisp and sharp. It makes it special and give people who already played on mobile a reason [to buy the Mac OS version]. You can see all the little details of the graphics in the game.” Now as the team makes new level packs, they’re using the Mac OS resolution standards that are much easier to scale down than scale up.

“This is our first experience releasing a Mac OS game. We believe it will develop into a bigger thing over time” Semyon told me. ZeptoLab will be closely watching the success of the game, but is simultaneously seeking other revenue sources. Last week it released Cut The Rope for the Barnes & Noble Nook reader. Apple TV and Siri are two other big platforms that developers should have on their radars. 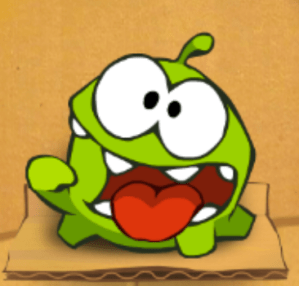 At the New York Toy Fair, ZeptoLab announced licensing deals with Mattel, Hasbro, JAKKS Pacific, and Li & Fung to create Om Nom plush dolls, a board game, and clothing line based on Cut The Rope. “We’re trying to keep the balance. Merchandise is important, but there’s no merchandise without a good product” the brothers say. Merch has been huge for Rovio‘s Angry Birds, and now Zynga has struck licensing deals, legitimizing offline revenue streams.

Finally, while Cut The Rope is in 4th on the all-time App Store paid app chart, ZeptoLab is eager to invent new intellectual property, “We have this creative urge to do cool new things.”

Developers shouldn’t limit themselves to porting existing games. The Mac OS gaming platform comes with unique characteristics like the trackpad to be designed for, rather than around. “Cut the ropes to your imagination” a some hack writer might say. I’ll just leave you with, “Go make people happy, that’s your art.”