The Droid 4 doesn’t look much like its other Droid siblings, but it does promise the same stellar keyboard and a solid construction. At $199 it won’t break your wallet, but it will offer most of the same specs we’re seeing go for $300, including a 4G LTE radio. If thin and light is important to you, the Droid 4 probably isn’t what you’re looking for, but keyboard purists should start getting excited… right… now. 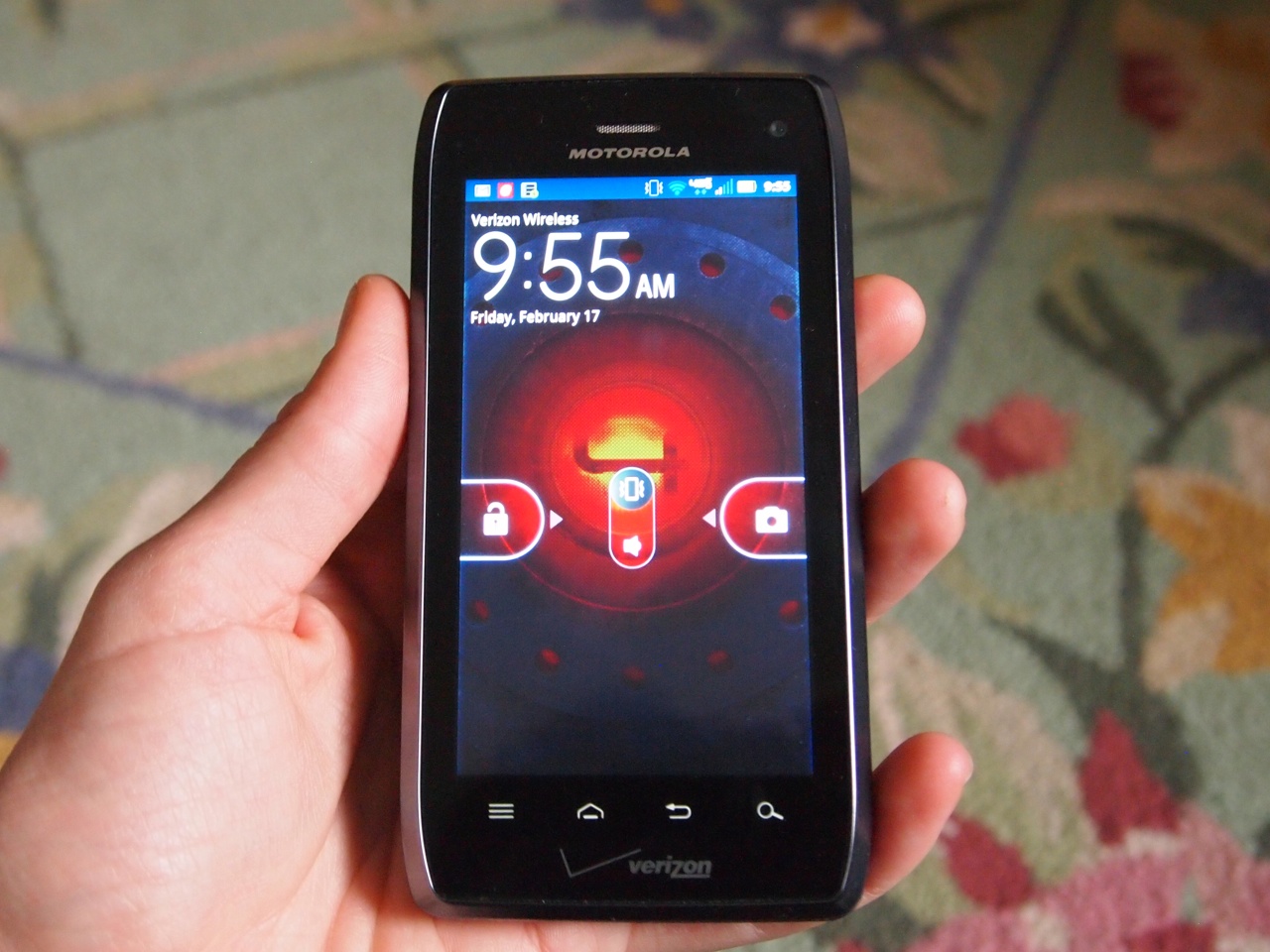 The Droid 4 feels great in the hand, and in my honest opinion it sports a far superior design than its predecessors. It actually looks quite a bit like the Razr, save for a textured plastic back panel and the obvious added heft. Still, the same black bezel and boxy metal edges remain.

I wish that both the lock button and the volume rocker had depressed a bit more when pushed, but Moto got it right where port placement is concerned — both the HDMI out and microUSB are on the lower left hand edge. That shouldn’t bother anyone who’s tooling around while plugged in (and trust me, you’ll be plugged in quite a bit (more on that later)).

The removable battery door has a nice feel to it and is surprisingly resistant to prints, though for some odd(/stupid) reason Moto won’t let us get at the battery itself.

The size of the phone didn’t bother me at all. Obviously if thin and light are important to you than you won’t enjoy this, but it felt nice and solid to me. I prefer the 4-inch screen to stuff like the Nexus and Note’s giant displays, and the .5-inch waist line wasn’t that much of a bother either. See, the phone’s weight actually lends itself to a more premium feel in the hand and I wouldn’t have even minded an extra .1 inch if it meant a removable battery (hint hint).

The Droid 4 keyboard isn’t going to give you any problems on the durability front. It slides in and out nicely and doesn’t seem to bend or crack at all when pressured. There is a little friction there when sliding it back and forth, but after a little getting used to I prefer that more than those ultra slippery sliders — feels a bit sturdier.

The buttons themselves lay nearly flush with the phone, which certainly looks nice, but I’d appreciate just a bit more of a hump or bump to help feel my way around. They’re non-slick keys which is nice on its own, but what’s even better is that they don’t seem to get all grubby and sticky either. 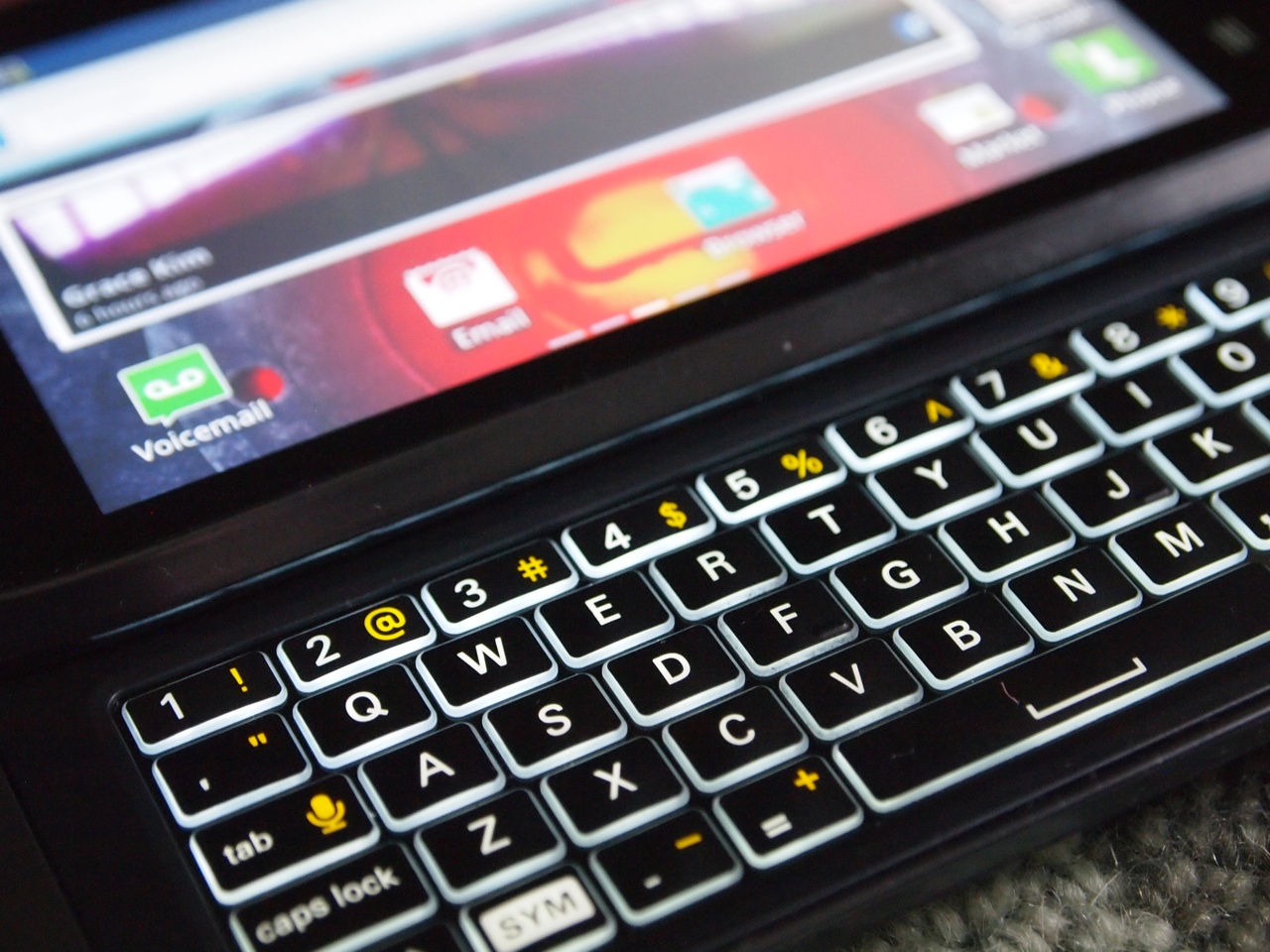 The buttons are placed well, with just enough space in between to at least feel a tiny groove (which is basically necessary since the buttons are so flat). They also offer a nice tapping noise and some solid tactile feedback when pressed, though textaholic teens may have some trouble going unnoticed in a classroom.

I still find the iOS virtual keyboard and Swype to be faster than this physical 5-row QWERTY (for me, at least), but keyboard purists likely won’t find anything better on the market.

The Droid 4 runs Android 2.3.6 Gingerbread along with some version of a Motorola overlay. It’s not MotoBlur exactly, but it’s certainly not pure Android.

The UI doesn’t seem terribly obtrusive, but it’s also not very useful either. The apps/widgets have this “flashy” effect when you swipe between home screens, which results in an annoyance at best and a headache at worst. There are social hubs and stuff, which is (how can I put it…) whatever, but the value proposition of the UI just isn’t good enough. Now that Googorola is almost in the bag we might start seeing a few more vanilla devices out of Moto, but that’s probably just a dream.

MotoCast is along for the ride here, which offers up a solid option for any cloud syncing/streaming you may want to do between phone and PC. You’ll also find Netflix, a lite version of Madden NFL 12, Kindle Reader, NFL Mobile, and Mog Music present and accounted for, along with a handful of bloatware apps from Verizon and Motorola. 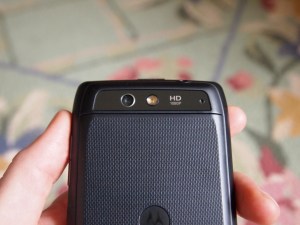 The camera on the Droid 4 didn’t live up to my expectations. The app itself is swell, on the other hand. There’s a little drop-down tab on the side that gives you access to plenty of settings, scenes, and modes. Not all of them are as useful as the others, but they’ll at least make for a good time playing around and taking pictures.

However, none of that really matters if the picture quality itself happens to blow. I tried to give it a few chances, switching between low-light and outdoor settings, but no matter what images just seemed to fall flat. I took the same shot with both my iPhone 4S and the Droid 4 and the difference in image quality is staggering. 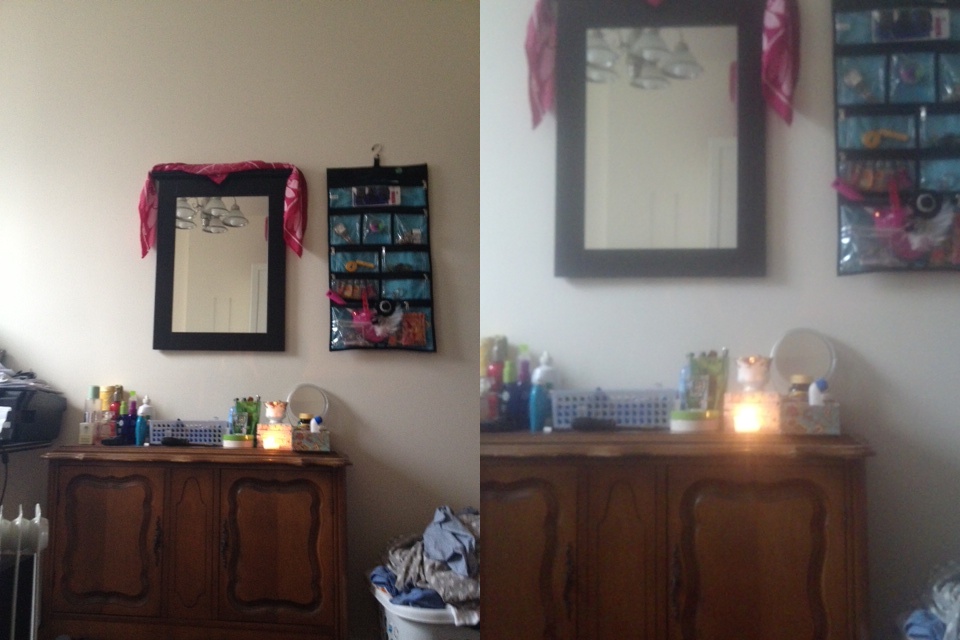 The Droid 4 uses a TFT LCD qHD (960×540) display that measures 4 inches diagonally. Size-wise it feels just right. Since the phone itself is a bit thick, a screen any larger might make one-handed actions more difficult. Serious mobile gamers might be a little peeved at the smaller display, but if you’re a serious mobile gamer the Droid 4 probably isn’t right for you anyway.

In terms of quality I’m not all that impressed. Everything seems a bit fuzzier than it should. On the other hand, the Droid 4 screen allows for a nice wide viewing angle, but with a screen so small it’s doubtful you’ll be gathering around the 4 to watch a flick with friends. Could come in handy for the occasional group visit to YouTube, though. 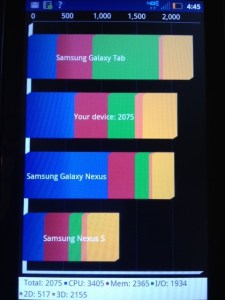 Call quality on the Droid 4 was just fine, though I did have a few issues whenever I tried to use microphone-equipped headphones. The usual Android lag is present, and this custom overlay (albeit lighter than TouchWiz) doesn’t help anything. For example, swiping between home screens packed with widgets and even scrolling in a the browser is choppy most of the time.

On the other hand the Droid 4 handled its benchmark testing rather well. Quadrant, which tests just about everything, gave it a score of 2430 on average. It scored an average of 86,544 on Browsermark, which benchmarks browser performance based on hardware. For some perspective, the Galaxy Note scored an averages of 2703 and 48,610 on Quadrant and Browsermark respectively.

Unfortunately, the Droid 4 falls short in the battery life department. We test battery life on phones by running them through a program that simply performs a Google Image search each time a page loads. At any time we can pop out of that program and do other things, but the phone is always in use without sleeping from 100 percent battery life until it dies.

The Droid 4 lasted just three hours and forty-five minutes. For some perspective, the Droid Razr gave me a solid four and a half hours, while the Razr Maxx lasted for an impressive eight hours and fifteen minutes. Now, the Droid 4 didn’t seem to have such awful battery life when I let it breathe every once in a while, and the Razr Maxx’s main feature is its massive battery, but this Droid 4 battery life just isn’t adequate.

Head-To-Head With The Droid 3 And iPhone 4S: 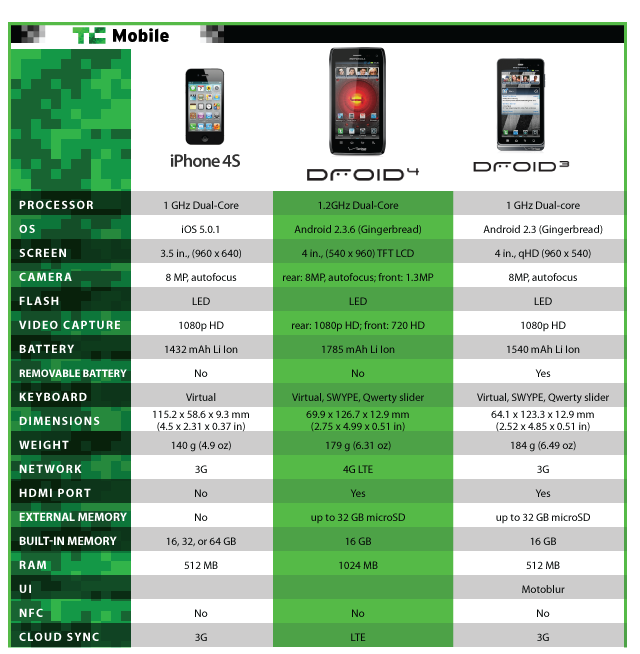 If you absolutely, 100 percent, beyond-a-shadow-of-a-doubt must have a physical keyboard on your phone, then yes, the Droid 4 is probably the best phone you’ll find. It’s far superior to any BlackBerry or QWERTY-sporting Android that I’ve ever come into contact with. But (and this is a big but)… I wouldn’t recommend the Droid 4 to just about anyone else.

The screen’s not all that impressive, the camera can’t hang, and the battery life won’t get you through the day. It’s pretty, that’s for sure, but simply not good enough unless your insistence on a keyboard is worth more than having a solid smartphone.

Remember, this is the next two years of your life. Who knows how awesome the virtual keyboards will be by then (or if we’ll even be typing with our fingers anymore)? Do you really want to be not one, but (probably) two steps behind everyone else?

Check out all of our Droid 4 review posts here.