There has been much debate about what the post-PC era is, when it will arrive, or whether it’s already here. But key pieces of new data, emerging last week, are making the case that we crossed the imaginary line from the “PC” era to the “post-PC” era at the end of 2011. According to analysts at Canalys, two major computing milestones were achieved at the end of this year: smartphone shipments outpaced PCs for the first time ever, and Apple became the world’s largest PC maker, if you count iPads as PCs (as well you should).

Combined, what these numbers tell us is that the post-PC era is happening now. Right now. And maybe we need to think about how we define “PC.”

The funny thing about that PC shipments number is that, on its own, it doesn’t paint the most accurate picture of today’s PC landscape. There weren’t 414.6 million desktop, notebook and netbook computers shipped in 2011 – those were at 112.4 million, 209.6 million and 29.4 million, respectively. The 414.6 million number includes 63.2 million in “pad” shipments, Canalys’s preferred term for tablets. That means 15% of the “PC” shipments in 2011 were tablets, largely Apple’s iPad. In Q4, tablets were 22% of the total PC shipments. And the tablet segment of the market grew 274.2% year-over-year. 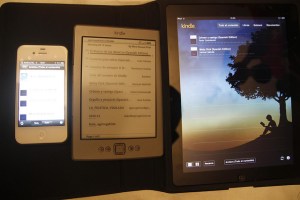 Also in Q4 2011, Apple became the leading worldwide “PC” vendor (if you count the iPad as a PC) with 15 million iPads and 5 million Macs shipped, representing 17% of the total 120 million client PCs shipped in Q4. It overtook HP (now #2), Acer, Dell and Lenovo in the process.

Of course, there’s still the question of whether or not tablets should be broken out into their own computing category, positioned against the traditional “PCs” when tracking device shipments. For what’s it worth, I think it’s fine to count tablets as PCs – after all, PC means “personal computer,” not “machine running Windows.” The fact that we still equate the word with a desktop, monitor, keyboard and mouse combo is a testament to the empire Microsoft built, and is now losing.

Case in point: netbook shipments dropped 25.3% from 2010 to 2011. Desktops grew a paltry 2.3% and notebooks grew just 7.5%. This is end of the “PC” era in action. While the 209.6 million notebook shipments still make that the largest category of “PCs,” the growth trends here, if sustained, dictate that’s its only a matter of time before the shift to tablets becomes even more pronounced.

Think about it: what’s the first “PC” you’re going to buy for your kid, as a new member to the post-PC computing generation? If you respond “notebook,” I’d say you’re lying. That kid is getting an iPad, even if they end up stealing yours. If not an iPad, then they’re getting a phone.

And smartphones are PCs, too. The most affordable ones.

This past quarter, smartphone shipments overtook PCs, a hugely important milestone that speaks volumes about the state of modern-day computing. The computer-in-your-pocket has moved from being “a niche product segment at the high-end of the mobile phone market to becoming a truly mass-market proposition,” explains Canalys of the change.

In Q4, Apple broke records by shipping 37 million iPhones – the most ever shipped by a single vendor in a quarter. Previously, Nokia held the record with 28.3 million phones shipped in Q4 2010. What a difference a year makes.

But Canalys cautioned that it expects to see smartphone market growth slow in 2012, as vendors exercise “greater cost control and discipline” to focus on profitability. This is the only discordant note to the report. Smartphone growth slowing? No offense to the analysts, but I’ll believe that one when I see it. Just watching Apple’s sales alone, it’s clear you can’t underestimate its power to deliver record-breaking numbers. In addition, just because vendors like HTC and Motorola are going to launch fewer smartphone models in 2012, that doesn’t (necessarily) mean they’ll sell fewer overall phones. If anything, the companies are hoping that their increased focus on “hero” devices will help them increase sales.

One thing is clear, however: that post-PC era everyone’s been talking about since the day the phrase slipped off Steve Jobs’ lips has arrived. We’re living it. Anyone who wastes their time debating its existence (tablets are PCs! phones are PCs!) is arguing semantics. The shift itself, whatever you want to call it, is happening.

So perhaps “post-PC” isn’t the best terminology. If everything’s a PC, then maybe what we’ve achieved is something more akin to “PCs Everywhere.” Not as catchy, though.