Mobile analytics firm Flurry is closing out the year with a look into the forthcoming shift in mobile installed bases expected in 2012. Using data from the firm’s dataset of over 140,000 apps running worldwide, it was able to calculate smartphone penetration in established markets like U.S. and Europe. Then, using additional data from the IMF in combination with Flurry’s own data, the firm was able to then determine which countries represented the top market opportunities for mobile app developers.

Not surprisingly, China and India made the list. But so did the U.S.

To start, Flurry looked at a snapshot of apps running across its user base over the past 30 days in order to rank the current addressable market. The U.S. led the way, with an installed base of 109 million out of 264 million (41%). Flurry notes that 264 million is about half of what Apple and Google say they’ve activated – something that can be accounted for by old device replacement.

Next, Flurry wanted to determine which markets hold the most future promise. It used the adult population counts from the IMF, then adjusted the numbers based on the size of the middle class in each country using a study by Miller-McCune. Flurry then estimated the size of the upper class for each country, as those folks could also afford a smartphone. This way, China, India and Brazil would not be over-represented in the estimations just because they have large populations.

And yet, they did make a showing. China has 122 million users who could afford an iPhone or Android. The U.S. has 91 million, India 75 million, Japan 65 million and Brazil 34 million. 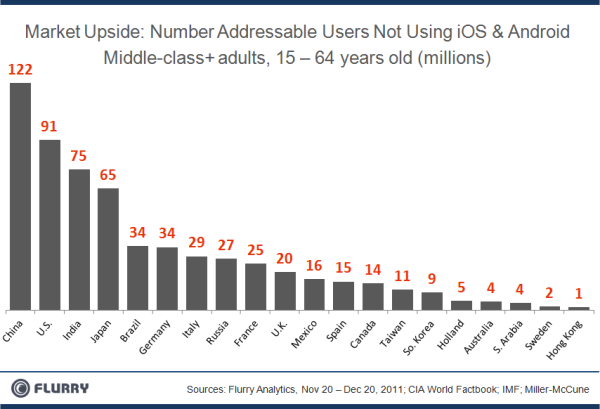 In the final bit of analysis, Flurry wanted to determine the world’s largest addressable markets, regardless of penetration. For starters, it looked at current market maturity (the measure of how penetrated smartphone devices are among a country’s addressable audience.)  The U.S., with the largest light blue circle in the graph below, has the largest total addressable audience (TAM) at 200 million. Sweden is the most mature country with 3.2 million of 5 million (66%) addressable consumers already using iOS and Android devices.  France, 10th in maturity, has 9.6 million of 34 million (28%) consumers using iOS and Android devices. 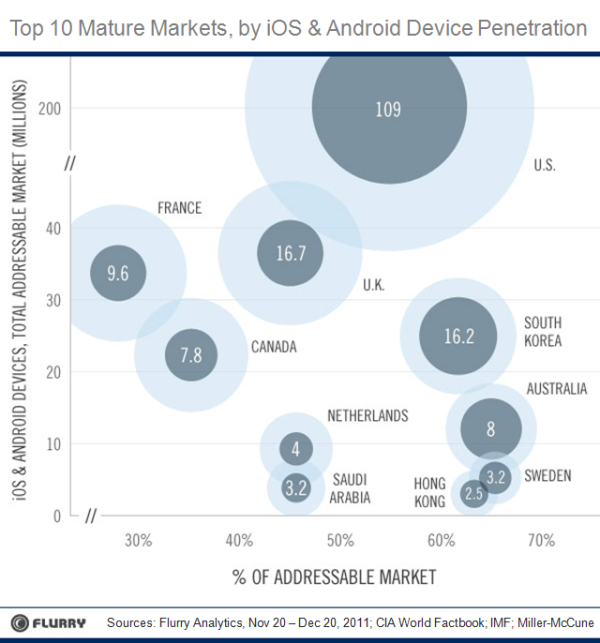 In looking at the future addressable markets, Flurry found that even though India’s total population is not far behind China’s, its total addressable market is. Meanwhile Japan, the world’s fourth largest market, has a lot of upside given light penetration of iOS and Android devices against its large, addressable market, says Flurry. 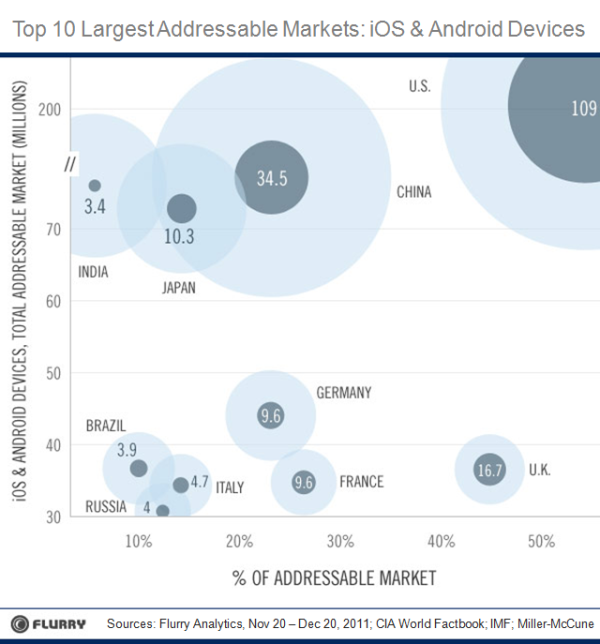 More analysis can be found on Flurry’s blog post.