Apple has been duking it out with Android manufacturers for the past couple years, and very few are safe. Samsung has already suffered some big losses with the banning of its Galaxy Tab in Germany and Australia. HTC, however, has remained mostly safe from Apple’s wrath.

In July the Taiwanese manufacturer had a close call, as Administrative Law Judge Carl Charneski ruled that HTC was infringing two of Apple’s proposed 10 patents. Of course, before any serious action could be taken the ITC needed to have a look, which is exactly what’s happened.

Luckily for HTC, most of the infringement “charges” have been dropped, save for two claims in one patent, ruled the ITC. The patent HTC is apparently infringing is U.S. Patent No. 5,946,647, specifically claims 1 and 8. Unfortunately for HTC and all other Android manufacturers, those claims cover a few different features that are baked right into Android, including the ability to push-to-talk on a phone number within an email. 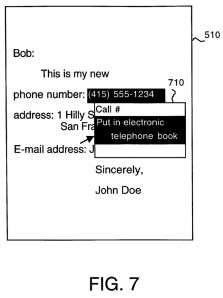 As far as HTC is concerned, this is a rather small win for Apple. Reuters reports that the infringing products won’t be allowed into the country if HTC can’t alter them. According to the official paperwork, the limited exclusion order will begin on April 19, 2012. But there’s an exception:

In addition, the Commission has determined, based on consideration of the effect of exclusion on United States consumers, that until December 19, 2013, HTC may import refurbished handsets to be provided to consumers as replacements under warranty or an insurance contract (whether the warranty or contract is offered by HTC, a carrier, or by a third party).

HTC has seemingly already figured a solution to the problem, offering the following statement to BGR.

We are gratified that the commission affirmed the judge’s determination on the ‘721 and ‘983 patents, and reversed its decision on the ‘263 patent and partially on the ‘647 patent. We are very pleased with the determination and we respect it. However, the ‘647 patent is a small UI experience and HTC will completely remove it from all of our phones soon.

While HTC asserts that the claims only cover a UI experience, supposedly HTC’s Sense UI, the Galaxy Nexus which runs pure Android 4.0 Ice Cream Sandwich also allows for push-to-call within an email. So, this likely presents a greater problem for Android makers in general. A feature as simple as push-to-talk within an email is something we’ve all grown accustomed to. Who knows how many more simple, but wonderful, features within Android are also infringing Apple patents?

It’s been Apple’s mission to destroy Android, and HTC is but a mere stepping stone.