A stylish and fun alternative to the likes of the Canon G12 and Nikon P7000. It’s not the quickest on the draw, and the build quality is obviously a step down from its elder brother, the X100, but image quality is good and operation is straightforward. It’s got a great lens and after a little familiarization could be quite versatile. While it compares decently with the competition, it’s far from a knockout, and if you’re looking for a compact enthusiast camera you would do well to look closely at the other options before pulling the trigger.

The X10 is, in a way, the X100 minus everything that made that camera good. The X100 had an excellent 20mm f/2 lens, a nice big APS-C sensor, a great metal body, and of course the unique hybrid viewfinder. The X10 has none of those things, sharing mainly the look and feel of the X series.

However, it also adds a very respectable zoom lens, fixes some control problems, and really improves the menu system, which was pretty bad. It’s actually a more practical camera for most people.

You turn on the camera by twisting the lens counter-clockwise to its 28mm position. When the camera is off, the lens is retracted all the way into its case, but whenever the camera is on, the lens protrudes. This is bad news for people who like to keep their camera on standby and ready to shoot: having the lens sticking out all the time makes for a less portable package. 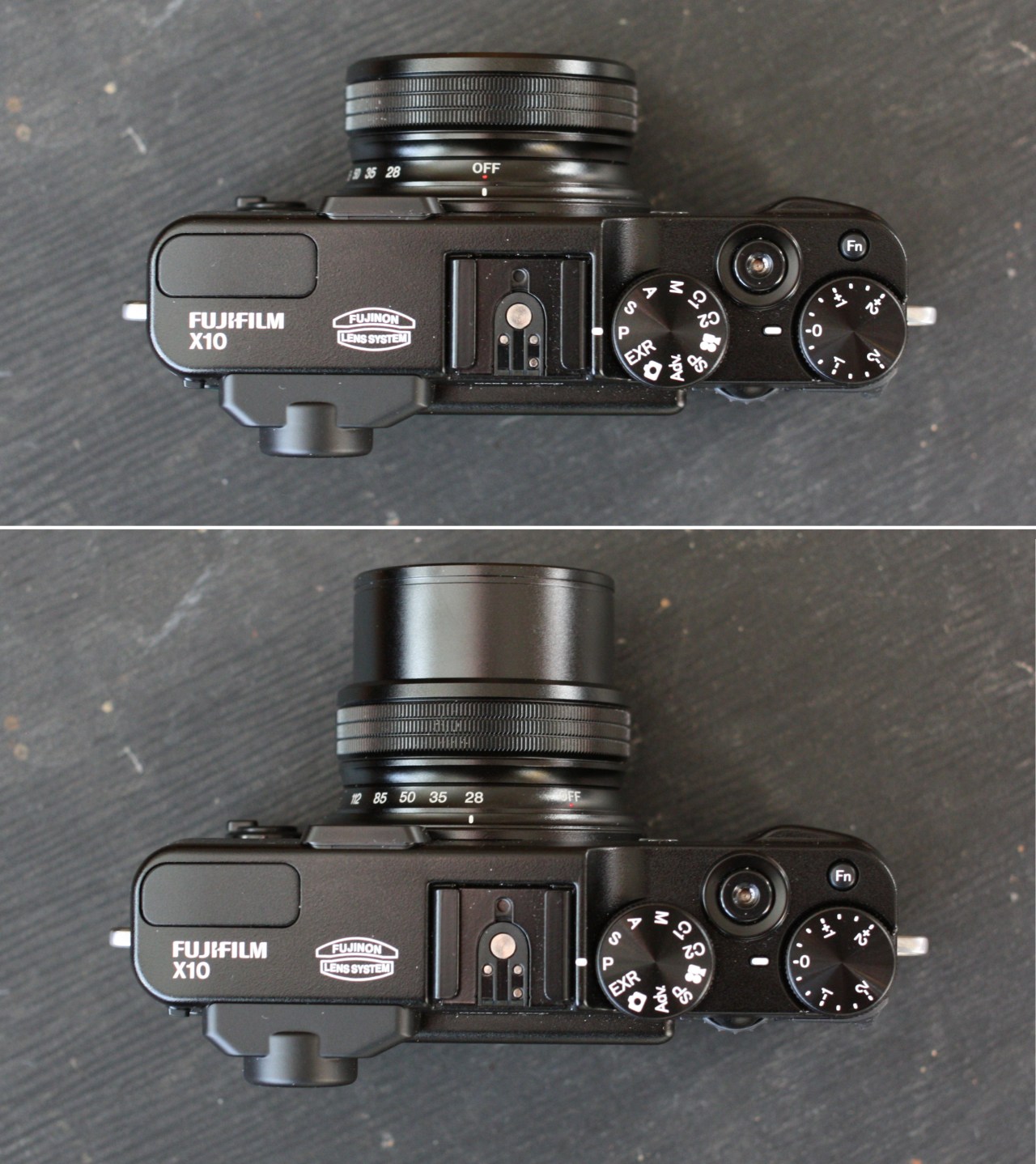 The zoom is a 28-112mm by 35mm standards. It’s extremely quick and satisfying to use, much better than electronically-controlled zooms. At the wide end it’s F/2, and that goes down to F/2.8 at the long end, which really is quite a decent amount of light to be gathering at that level of telephoto.

Attached to the zoom is the viewfinder, which zooms along with it. It gives the illusion of operating a zoom lens on an SLR body, which will probably be a comfort to people who are used to that (like myself). The lens barrel actually protrudes into the viewfinder window at wide angles, which ends up more quaint than problematic. There are unfortunately no displays inside the viewfinder, so if you want to adjust your aperture or what have you, you’ll have to look at the LCD. There is also no proximity sensor that turns off the LCD when you’re using the viewfinder, which is kind of an odd omission. 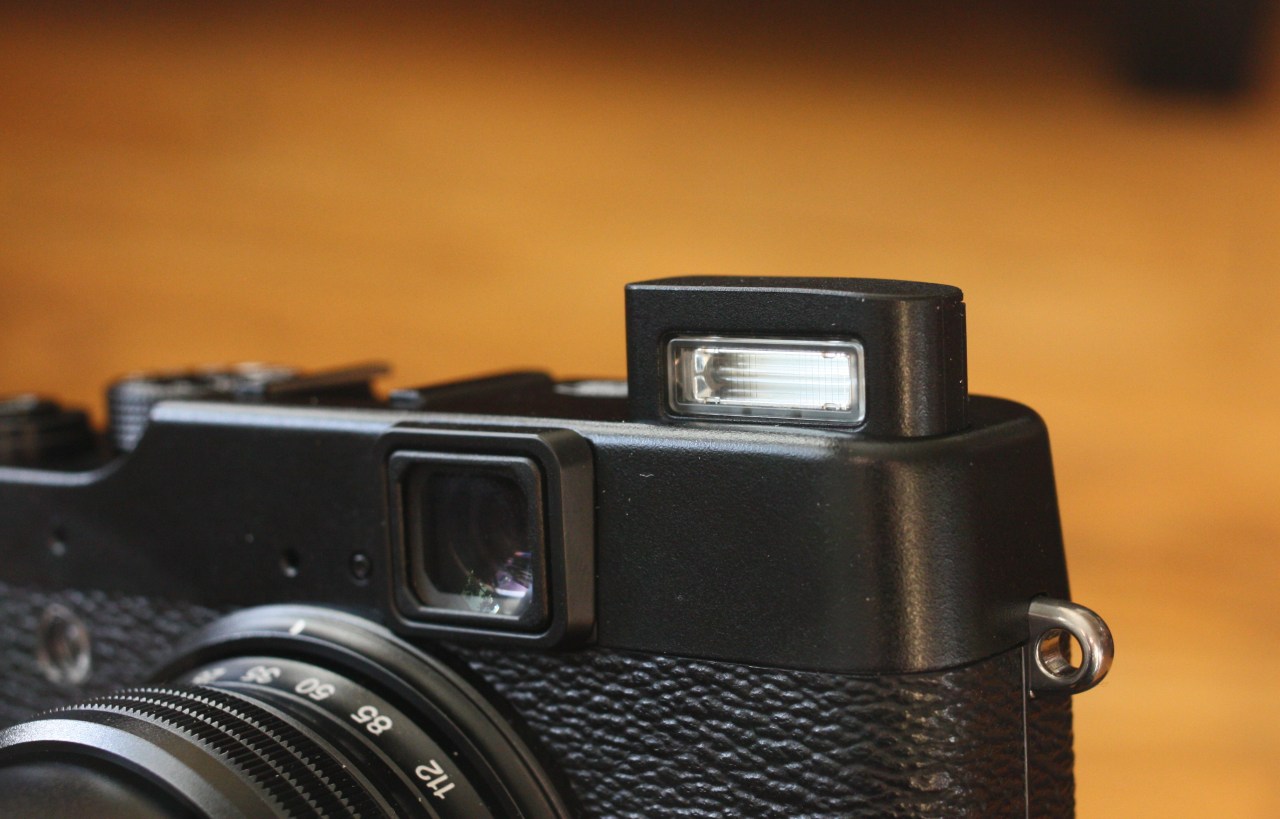 On the topic of the viewfinder, it is a little narrower than the actual image, which is of course better than being wider. In the following two shots, I framed the viewfinder with its corners at the edges of the windows (in the first shot) and its sides at the side of the chest (second shot). I’ve outlined roughly what the viewfinder covered: 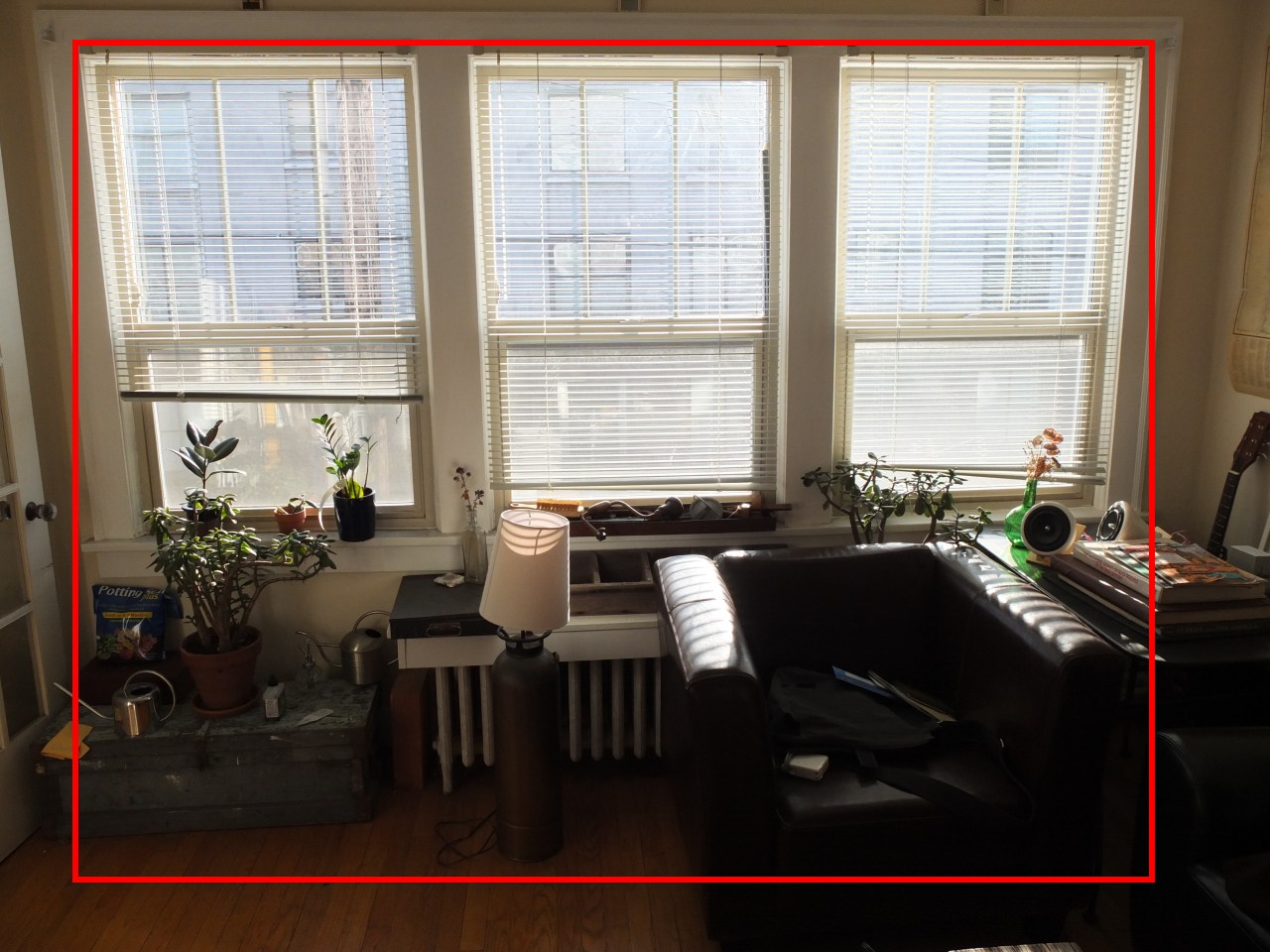 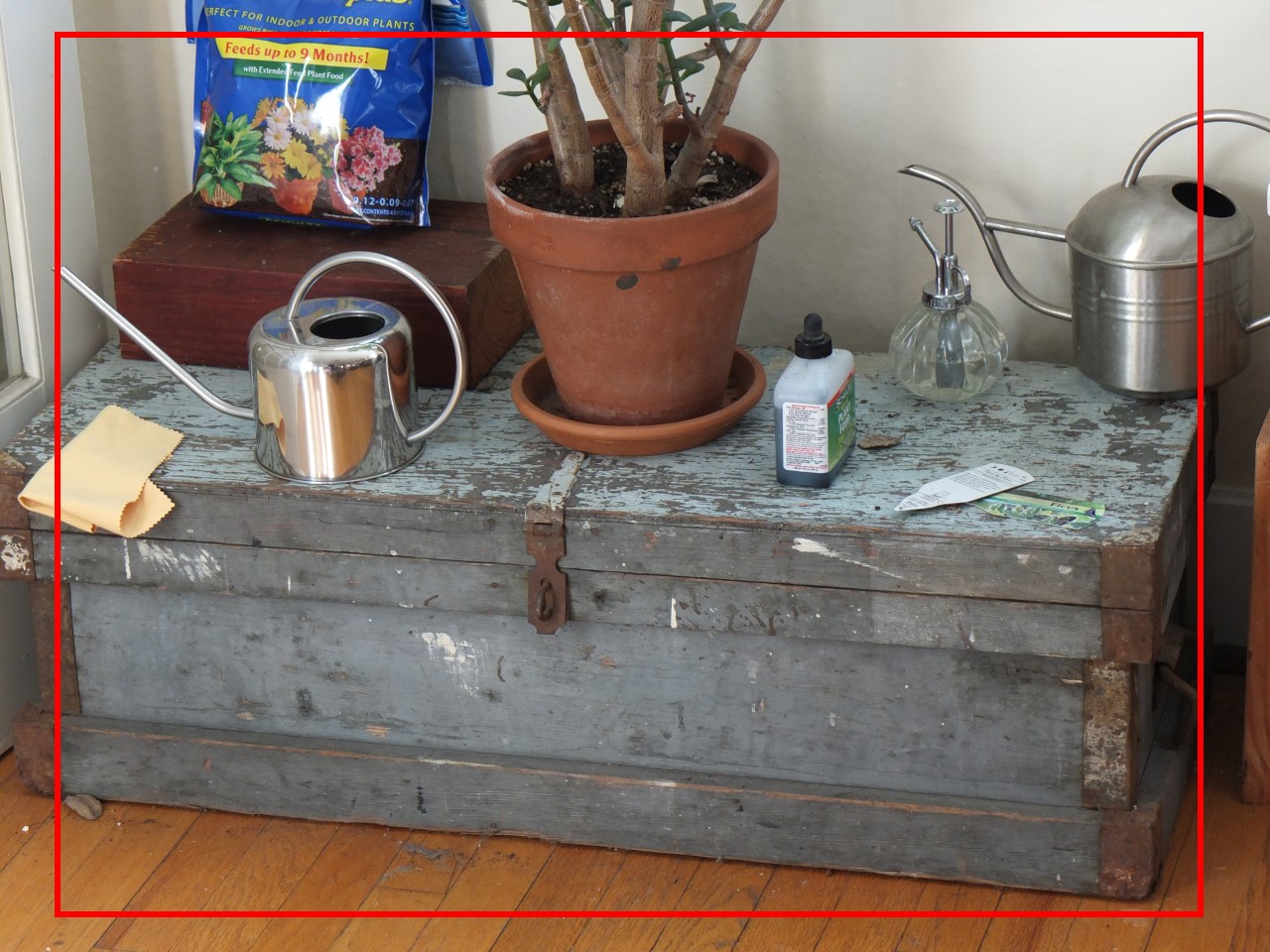 So it’s not exact, but it’s a fair approximation and you shouldn’t feel any anxiety using it as long as you feel confident in the autofocus.

The body of the camera is similar to the X100, but looks and feels quite a bit cheaper. I thought the black-on-black color would look stealthy and cool, but because everything on the camera is black, it just makes it look plain. Not that this is a serious objection to owning the camera, but it is a little disappointing that it’s not as beautifully designed as the X100. Don’t get me wrong: it’s certainly more interesting-looking than the competition, if you ask me. I wish they’d spent more time on the finish, though. 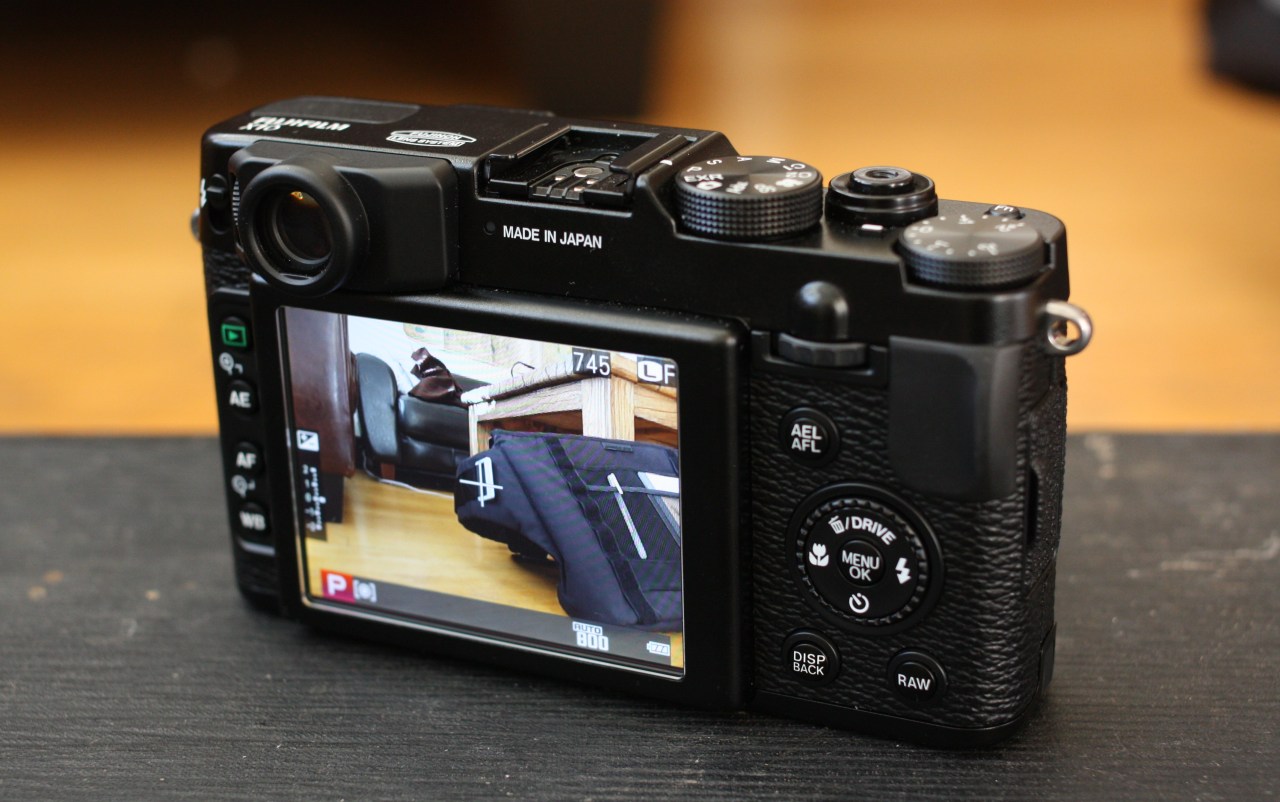 On the back the layout is similar to the X100, but the X1’s jog wheel/d-pad just feels better. Maybe I’m imagining things, but it just seems more stable and responsive. There is now a dedicated white balance button, which some will enjoy.

On top there are two dials: mode and exposure bias. More direct manual controls like shutter and aperture would be nice, but really it doesn’t make sense unless you can have them all, so mode and bias are just fine. In manual mode you have instant access to pretty much everything you need, even if it’s not on a dedicated dial. Power shooters should be able to set up custom shots in just a few seconds once they’ve gotten the hang of things. The menus for things like white balance and ISO are only one level deep, so there’s not a lot of navigation to do unless you’re fiddling with settings.

Handling likely depends on your hands and what you’re used to – like any camera. The X10 is definitely a two-hander, though it has gained a thumbgrip that makes one-handing while zooming easier. I have medium to large hands and my thumb tended to rest on the rear dial instead of the thumbgrip if I didn’t steady it with my other hand.

Focusing is kind of a pain. I mean, if you’re not in a hurry, there’s no problem: I found the autofocus to be accurate and obedient. You can switch between center-point and matrix autofocus and manual using a little switch. But I wouldn’t say it was quick, though I’ve seen some report it as such. It can be quick, certainly, but it’s not reliably so, and like many others, it tends to over or under-shoot the mark and then reverse and try again. It’s not a flaw unique to the X10, but I still wouldn’t feel confident shooting any kind of action with this camera. On the other hand, the macro mode is very nice: 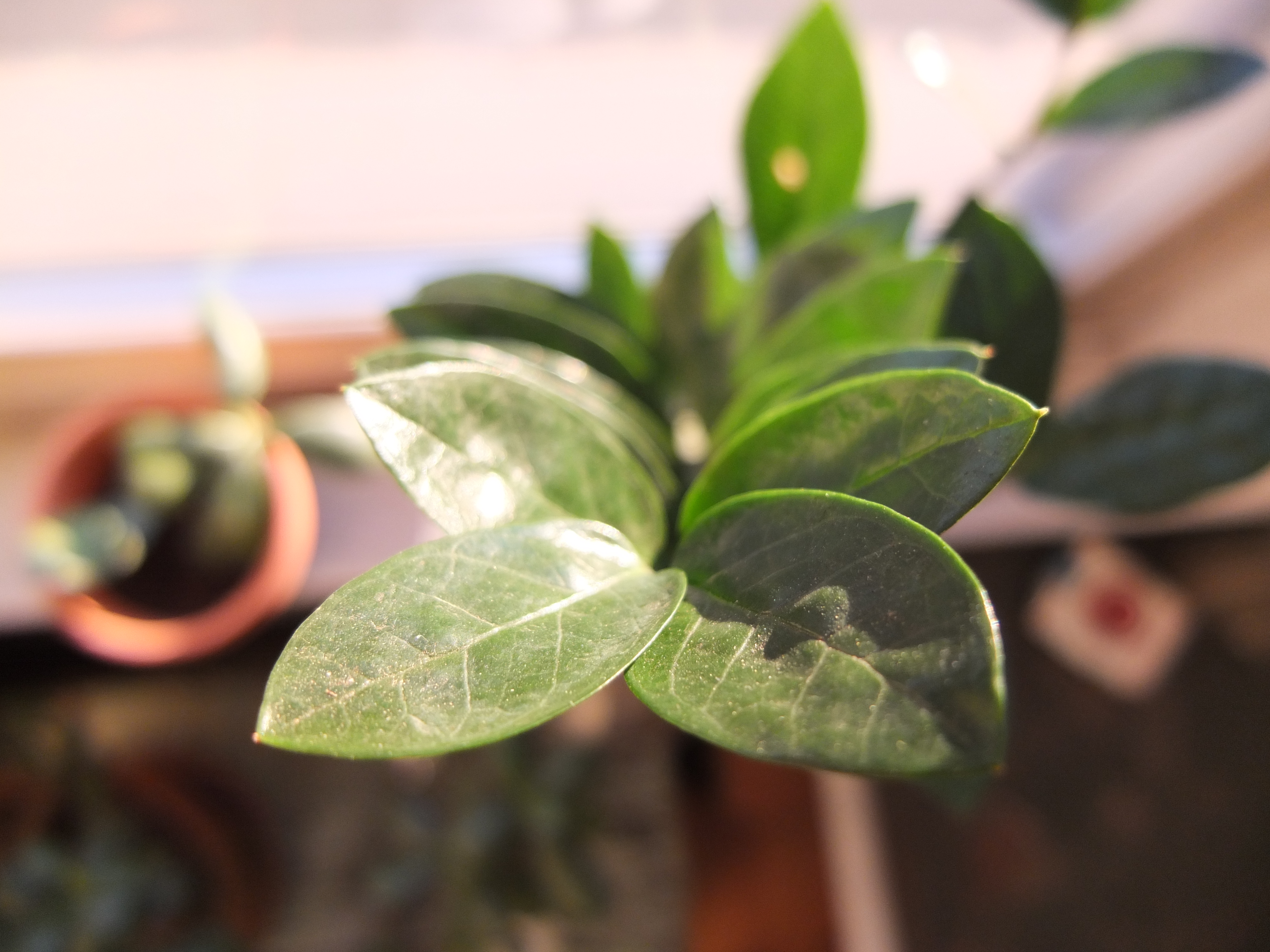 The manual focus-by-wire is one of my least favorite parts of the camera. Lacking a focus ring on the lens itself, you must use the jog dial on the back. This can be either quick or exact, but not both. If you spin it fast, you can get to either end of the focus pretty easily, but getting the focus exactly right is a bit fiddly, I found. The camera, thoughtfully, automatically zooms into the center of the frame so you can check your focus exactly.

There is a very cute pop-up flash with its own designated pop-up button, which I love. The button, not the flash. The flash is pretty standard point-and-shoot stuff and you’ll want to use the hot shoe if you’re doing any real flash photography.

The LCD and info display are all right, but I feel like they could have streamlined the different modes a bit. Some of the X10’s competitors also have a higher-resolution display, something that really should have been included on an enthusiast camera like this one. The digital level is handy for people like me who must have everything perfectly perpendicular: 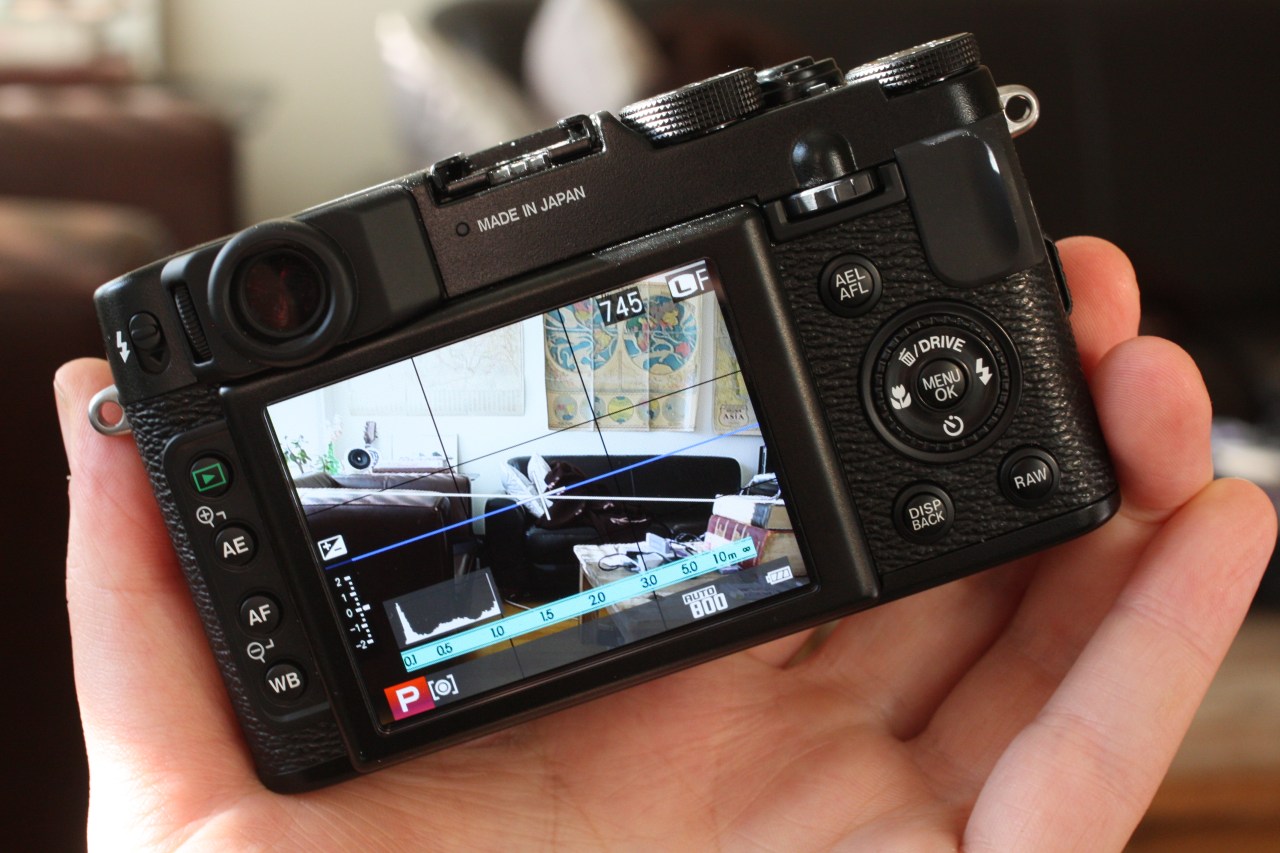 For serious comparisons of similar cameras, I recommend going to a dedicated photography site like DPReview, where they have a controlled test setup. For my part, I just kept it around and used it as I normally would, getting some pictures in and out of doors in a few lighting situations. Click on these to get the full-size images, which you can inspect for noise and such.

Be sure to open in a new tab to avoid triggering the windowed viewer.

Yes, I know the tree is sideways. I didn’t want to reorientate it and have to reprocess the JPEG. And note that the house picture and the dog on the porch were taken from the same vantage point with the widest and longest zoom respectively.

The lens is nice and fast, so you won’t need to push the ISO too much. I found that at 800 it was perfectly fine and 1600 was acceptable. Beyond that I started seeing some very noticeable luma patterns, though I didn’t see much in the way of colored noise.

As for lens quality: only some detailed analysis will find the limits and best practices, but I found it just fine for normal shooting, with no vignetting at wide angles and no more than the usual chromatic aberration and fringing.

Movie quality is… fine, I suppose. It’s 1080p30 and looks good, but you can’t adjust exposure or focus manually while it’s recording. DSLRs at this price offer a better video experience, manual focus, and more options for formats and framerates.

While people interested in getting into serious photography would do better to pick up a DSLR and a nice starter prime lens, the X10 is a charming and fairly powerful camera that anyone, photographer or not, will have fun using. A larger sensor for low-light sensitivity would have been welcome, and manual focus is still not as good as the rest of the camera, but overall it’s both practical and lovable. It’s a camera with personality.

Compared with high-end point and shoots it is more complicated and more suited for specialized photography, and compared with its larger brethren, the G12 and P7000 among others, it falls behind in some features (LCD, the sensors are in fact slightly smaller) but excels in others (the lens and zooming viewfinder). As always, hold all your options in your hand before putting down the money. But if you’re looking to spend more than $500 but less than $800 on a camera, the X10 should definitely be one you check out.