With an enormous professional social network consisting of over 100 million users, LinkedIn is undoubtedly a great business — and a valuable service. Of course, the problem with LinkedIn and other professional networking and job platforms is that there’s a lack of real conversation between individuals and businesses. Hands down, businesses are looking to hire great talent, but they want more robust ways to find the most relative candidates for their open positions and job seekers want better tools to find the top ranked companies that are relevant to their backgrounds, what those companies are looking for in candidates — and they want feedback.

In September, two Stanford Business School, grads Brendan Wallace and Adeyemi Ajao, launched the beta build of Identified, a professional job search engine built on Facebook data that looks to take on LinkedIn and BranchOut (among others) in an effort to give job seekers and companies a better way to connect and find talent. The main feature of Identified is its so-called “Identified Score”, which assign a numerical rank (out of 100) to professionals based on their work history, education history and social network.

Wallace and Ajao call these rankings “Google Page Rank for people”; just as the search giant ranks websites based on their relevance to certain search terms, Identified uses its scores to do just that with professionals. The ranking is a proxy for relevance, so based on a user’s most up-to-date background information, they will show up in searches for categories that are relevant to their most recent jobs, etc.

Working with metadata from Facebook, Identified has already created listings for more than 50 million people, although only 150K of those people are active monthly users. But that’s just in six weeks since the launch of its beta. Already, tens of thousands of people are accessing Identified Scores each day to evaluate professionals for recruiting, sales, networking, background checks, and more. What’s more, over 1.8 million scores have been viewed to date, and Wallace says that thousands of companies have already requested access to these scores to pre-screen candidates for recruiting.

But the real value here, Wallace said, is that the average age of the Identified user is 24, and over 90 percent of its users are under the age of 30. With companies vying, categorically, to hire the best young talent, Identified offers businesses an easy, score-based (and relevance-based search) method of finding that talent.

Today, Identified is officially launching out of its public beta, and will now be offering free and open access (for both companies and the public) to the scores of those 50 million-odd professionals. This means that all Identified Scores are now public and will be searchable and accessible to anyone on the Web (and will pop up in Google searches) — companies included. Privacy settings will be included, thankfully. 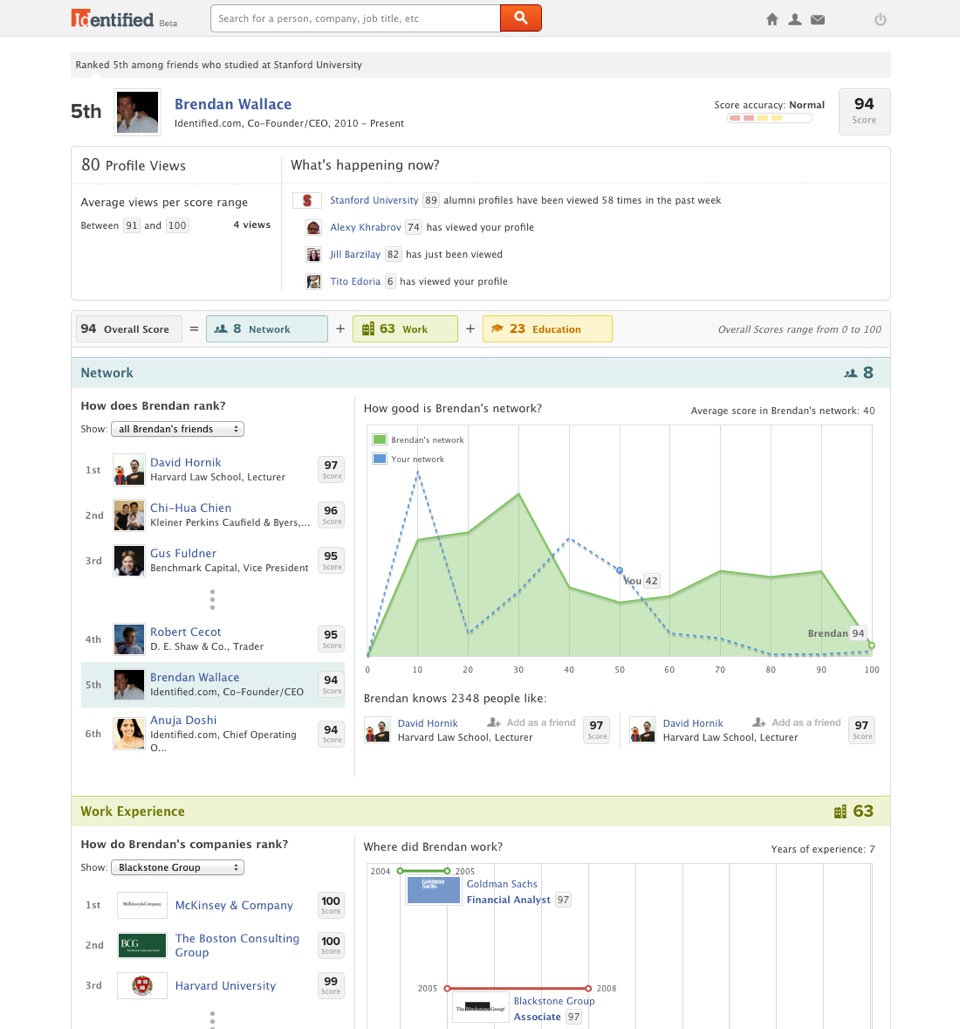 And to that point, Identified also offers scores for over 60,000 companies and more than 8,000 universities, and Wallace said that many of the early signups the company has seen have come from employees wanting to add more relevant information to the listings of their company or university to up their scores. It’s this kind of gamification that can be a huge legup for Identified.

As Identified Scores go up based on interest from other users or companies (by way of number of views, clicks, and actual hires), the more one adds to their profile, the higher the likelihood becomes that their score will go up, presumably based on their being placed higher in search rankings. Wallace believes that this “the more you add, the higher you’re ranked”, gamified approach presents a higher degree of opportunity for engagement among users, as interaction with their rankings have real world, and career implications.

Of course, having made their scores public so that anyone can now view the scores of 50 million people, there’s some potential here for controversy, but Identified has built in controls so that non-Identified users can only view those profiles of companies and individuals that are registered users.

Yet, the other question for Identified’s ranking system is: What if you didn’t go to an Ivy League school, but you’re still an awesome engineer, for example? Since the point of building its platform on top of Facebook data is to allow people to create networks around the friends and associates they actually interact with (and count as “Friends” on Facebook), if a user shows impressive career history and strong connections/relationships to top engineers, then not having gone to a “top school” becomes less relevant.

Of course, Identified Scores are not meant to be reflective of a person’s “actual worth” — just because you have a “65” and your friend has an “80”, doesn’t necessarily mean that your friend is a better person, is smarter, etc. In a sense, the company’s scores are like stock prices, in that they don’t necessarily reflect one’s true inherent value, they are based on relevant criteria — in this case to search terms. The scores aren’t perfect.

Even so, Identified adds a level of transparency to the labor market and opens a channel of communication between companies and professionals that has been incomplete to date. Being able to see how “in demand” you are based on your professional history, which companies are looking for employees like you, and how, in turn, you can make yourself more attractive to employers — is a valuable step forward for the professional networking space.

It’s not perfect yet, but it’s a step in the right direction. Whether or not Identified becomes a potential target for acquisition by LinkedIn or just a flat out competitor remains to be seen. But, according to Wallace, they’ve seen that some recognizable names at LinkedIn have been checking out the site. 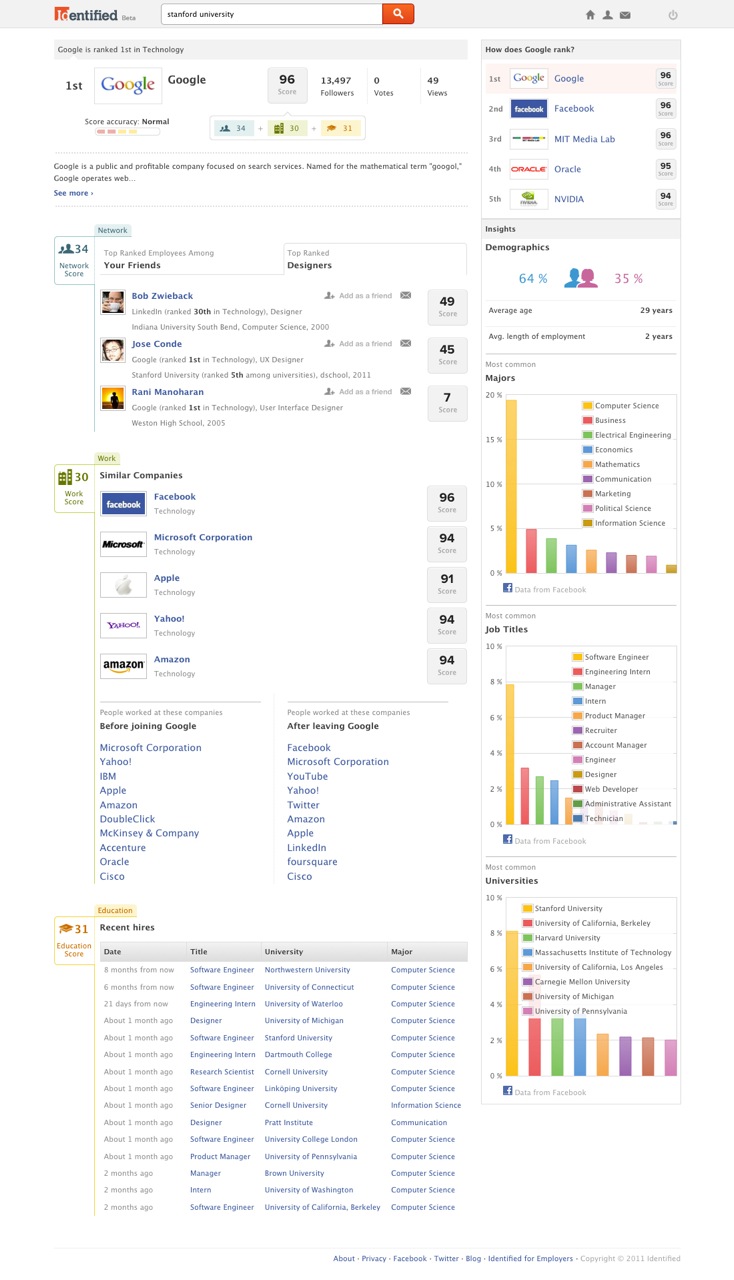