Identified this morning launched its eponymous search engine for professionals, hoping to challenge the likes of BranchOut and LinkedIn by leveraging Facebook‘s vast database of information about people.

Identified’s search engine, which was debuted earlier this morning, basically allows people to see how they appear when others look for them online, particularly in a professional context.

The startup’s technology organizes and categorizes all professional information it can find on Facebook, and says it has thus far scored and indexed over 40 million professionals, 60,000 companies and 8,000 universities.

Each Identified user is given a score, based on who and what they know according to their online profiles – a score they can improve by adding information and expanding their network.

According to Facebook, less than 50 percent of user enter their professional information in their Facebook profiles, however.

Here’s how one of the company’s cofounders, Brendan Wallace, pitches Identified’s search service:

“We began Identified as a recruiting site to connect job applicants with companies, but saw the power in providing search results based on people’s online networks — not just the standard metrics of education and work experience. Nobody had ever attempted to quantify the value of a person’s online network.

We saw that companies cared as much about a person’s network as they did about their education and work experience. So we built Identified to show people how they appear to world based not only on what they know, but who they know.”

Legendary VC Bill Draper (founder of Sutter Hill Ventures and Draper Richards, among other investment firms) also foresees a bright future for the fledgling startup, saying that he thinks Identified will become the “standard of professional networking for the Facebook generation and beyond” just like Facebook did for social networking.

Identified says hundreds of companies, including Google, Disney, Sequoia Capital and MTV are already using its service on a daily basis to search for professionals.

If you’d like to learn more about Identified, check out Forbes’ launch coverage.

For what’s worth – my lousy Identified score is 20: 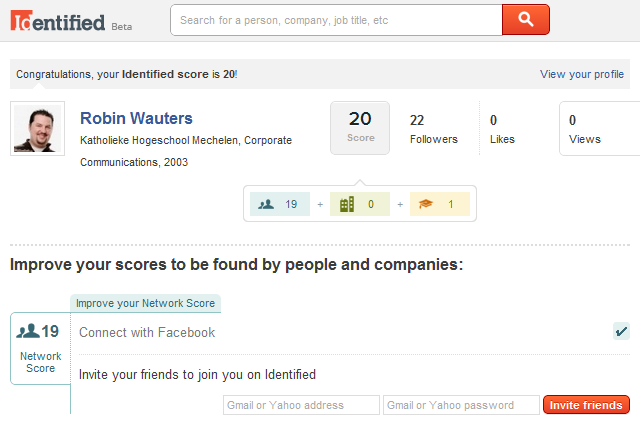