For the past week, I’ve been testing the alpha version of the Everpix service, which aims to automatically centralize and organize all your digital photos, both online and off. I’m happy to report that, so far, it works as advertised.

In case you missed it, Everpix, a creation of ex-Apple engineers, was one of this year’s TechCrunch Disrupt finalists. Using a small utility that runs on your computer, Everpix lets you connect to your local photo stores, online services like Facebook, Flickr, Picasa and Instagram, and even to the photos sent to you in Gmail.

Given that two of Everpix’s Co-founders, Pierre-Olivier Latour and Kevin Quennesson, each spent several years with Apple (Co-founder Wayne Fan was previously at frog design), it’s no surprise that Everpix is launching first for Mac users.

To get started, you install a utility that places an icon in the Mac’s menu bar. Initially, the syncing may slow your computer down a bit as it uploads your entire photo library. For that reason, it might be a good idea to get the upload started before bed so it doesn’t interrupt your work.

Clicking the Menu Bar icon will take you to the Everpix website, where you can configure the various services you want to connect to, as well as point it to which folders on your desktop contain photos you want to sync online. 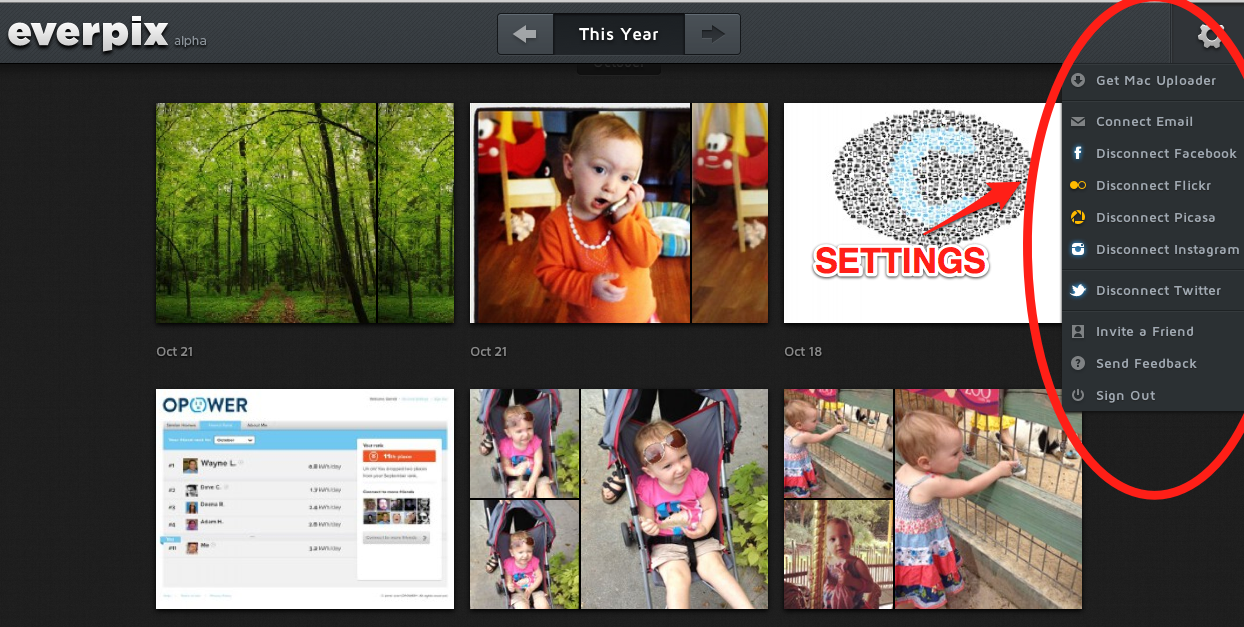 For those of you with complicated folder-within-a-folder systems for organizing photos on your computer, you may be a bit disappointed to find that with Everpix you can’t choose to upload only a selection of folders or files. You must either globally enable or disable your entire Pictures folder (or optionally, your Documents and Desktop, too). However, I’d argue that, for most people, this will be a feature, not a bug. In providing fewer choices in terms of what can be synced, it simplifies the setup, reducing the amount of clicks it takes to get started. (You click the icon, go to “Photo Sources” then click the folder you want online. That’s just two clicks).

In my case, though, the folder I use to save photos that appear accompany blog posts is in my Pictures folder, and I had no desire to include these alongside my family photos on Everpix’s website. I will be forced to relocate that folder elsewhere, it seems.

By default, all your photos are private and will always remain private unless you specify otherwise, so unless you have some really personal photos, I wouldn’t worry too much about having them posted online. Of course, seeing a secure URL (i.e., one beginning https://…) would make me feel a bit more comfortable.

From the Everpix website, you can choose to enable additional online photo-sharing services, all of which connect using OAuth or, in Facebook’s case, Facebook Connect. The one big disappointment here was Gmail. Despite the fact that Gmail added support for OAuth back in March 2010, Everpix straight up asks you for a Gmail username and password, noting that it will store your encrypted password or its servers. No thank you. When a better method is available, there’s simply no reason to handle things this way. I chose not to connect my Gmail, and will not do so until OAuth is supported.

As for the organizational aspects to the service, Everpix does as promises – it groups photos together by “moments.” These moments are periods of time representing life events. For the most part, I found photos grouped by date, but in some cases, it knew to separate the group of photos I took during the day from those taken later at night.

One wish I had for the “Moments” feature was a desire to manually combine some of these groupings into one. For example, photos from a conference like TechCrunch Disrupt were spread across multiple days, when I’d rather save it as one moment. Since all the photos are fairly recognizable to the human eye as belonging to the same group (i.e., green background, conference stage), it’s clear there’s no super-intelligent machine algorithm handling the groupings.

The other big feature, auto-curation, I liked more. In large photo sets, the service will run through the batch and hide (not delete), bad photos like those that are blurry, out-of-focus, dark, or under or over exposed.  You can return these photos to view with one click at the bottom of the page. And to keep the photo unhidden for good, just click the arrow icon on the photo.

The best feature of all is Everpix’s simple privacy settings. As noted above, all photos are private by default, but with one click, you can change that. With a toggle switch at the top of the page, an album (or select photos in an album) can be made accessible via a provided URL which you can share with Facebook, Twitter or via email.

Overall, despite the service’s simplicity, there are still many features Everpix lacked. For example, photos that appeared in landscape when they should be portrait aren’t rotated for you and there’s no mechanism on the site to do so. (Sure, that’s probably how they appear on the original site, too, but it mars the experience.) The forthcoming mobile interface for Everpix is also a much-needed addition, as it would provide the means to actually have your photos on hand wherever you are, plus provide a much simpler method for automatic uploads from your device. That’s in development, though, so it’s only a matter of time. I’d also like to name some of my moments, tag them or search them by people, places, dates or subjects, but search is not provided at all.

It would be great, too, if Everpix could pull in the face tags that iPhoto and Facebook already have and combine them – that would truly be a feat worthy of praise. I imagine that these are the kind of things Everpix is working on next – they would be crazy not to. A comprehensive photo database needs to be searchable and structured, not just organized and pretty, I’d say.

The company still doesn’t have details regarding pricing or a public launch, but in the meantime, I’m fairly happy to have this resource on hand. Before now, my photos had been widely spread out across the Web forever, with no easy way to centralize them. For that feature alone, Everpix is a tool worth having, in my opinion.