Hackers aren’t necessarily known for their sense of fashion. Usually, it’s all about the code. They might as well be wearing jumpsuits — or their birthday suits, for that matter. But here at the Disrupt Hackathon, some of our hackers are trying to prove the world wrong. There is some sartorial splendor afoot, and it’s coming in the form of headwear.

Just like these coding wizards at Hackathon, these hats come in many shapes and sizes, colors and styles. Whether they’re actually fashionable is something we can’t actually report on. We’ll leave that for the general public. But one thing is certain: hackers heart hats. A lot.

Below, without further ado, them hats: 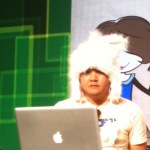