Last night I went out to dinner. But I didn’t pick where I was going, Ness did. The place was good. Score one for Ness.

We previously covered Ness Computing in July, talking about the technology that would power their eventual apps (as well as their funding). Today, the first such app has gone live in the App Store, called simply, Ness. It’s a personal search engine catering to restaurants. And it’s good.

Whereas most food and restaurant recommendation apps focus on ratings from the general population, Ness is tailored around social as well as your own tastes. Others have tried this before as well, but Ness seems to have it nailed thanks to a ton of data they’ve already been pulling in before the app even launched.

They can do this because they hook into Facebook, Foursquare, and Twitter (as well as a few other, smaller sources) to find signals about certain restaurants. Are people tweeting about liking them? Are users checking in there a lot? Those kind of things. This helps to determine what restaurants Ness should show to you within the app.

When you first load up the app, you’re asked to rate ten places you’ve been. This helps calibrate your “Likeness” score, the key to the recommendations. These Likeness scores show up as a percentage likelihood that you’ll like the restaurant being shown. This alongside proximity and the social data determine what restaurants are shown to you.

But the app is also more of a search engine in the more traditional sense as well. You can easily search for different types of food, whether they’re broad or specific. And you can choose to search in other cities. Or you can alter the search settings to restrict a search by price and weed out bigger chains, for example.

When you find a place you like, you can drill deeper to get hours of operation, phone numbers, a website, etc. You can also save places to come back to later. And you can share restaurants with friends with the click of a button.

They key to the app though is the ease of use and the accuracy of the data. I was constantly finding the Likeness ratings were roughly correct for what my actual rating would be for restaurants I’ve been to. And the system will only get better as you rate more venues.

The look and feel of the app is also beautiful. I’m told that we can thank an original iPhone team member formerly of Apple and now with Ness, for that.

Remember that restaurant recommendations are just step one of what Ness hopes to offer. The next steps are to point the Likeness engine towards shopping, music, nightlife, and entertainment. All of that could make for one killer, subjective mobile search engine.

You can find Ness in the App Store here. Sadly, it’s U.S.-only for now. 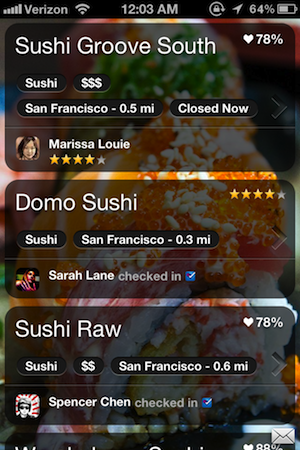 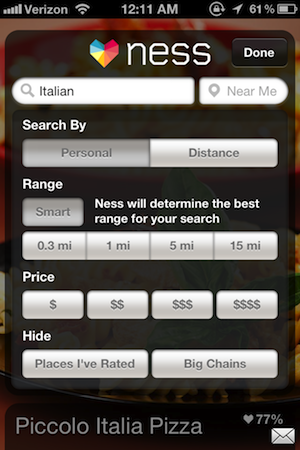