Millennial reports that smartphone mobile ad impression share grew 5 percent month-over-month and continued to top the device list with 68 percent of the impressions in July. Connected Devices (i.e. iPads) and Feature Phones were tied with 16 percent of impressions. 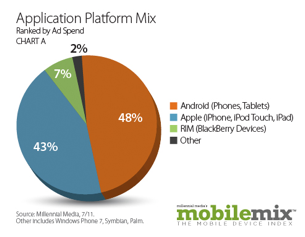 As reported in the company’s SMART report a few weeks ago, manufacturers Apple, HTC, and Huawei all more than doubled their impression share in the past two years thanks to the growing popularity of smartphones. Millennial says that in 2009, its first Top 20 Mobile Phones list featured a mix of feature phones and smartphones, including seven BREW devices, three Java devices, two BlackBerry and Windows Mobile devices, the iPhone, and one Google Android device. In Q2 2011, the same list consisted entirely of Smartphones (with many more Android phones).

In July, Apple continued to be the leading device manufacturer the network, representing 26 percent of the Top 15 Manufacturers impression share, and the iPhone maintained the number one position on the Top 20 Mobile Phones ranking with 13 percent of the impression share. Samsung actually so the most growth month over month, up 28 percent from June, taking the number two manufacturer spot for the sixth consecutive month.

Millennial also breaks down ad spend from applications on the network, and Android passed iOS for ad spend. According to the report, 48 percent came from Android apps, while 43 percent of ad spend came from iOS apps. 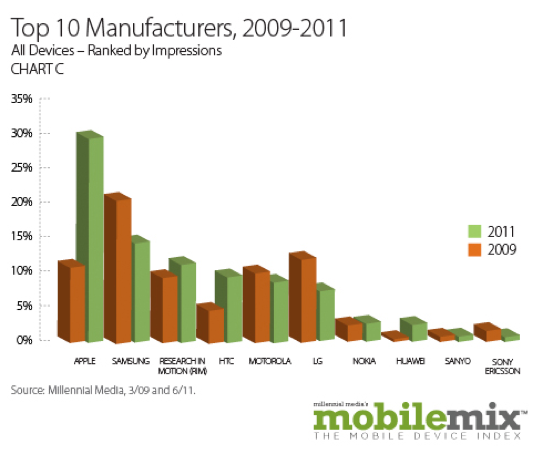 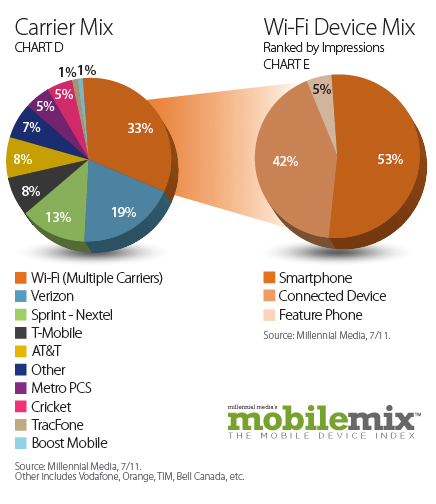