The largest remaining independent mobile ad network Millennial Media has released its monthly report on data from the second quarter of 2011, and unlike last month’s report, it looks like iOS and RIM are seeing a resurgence as Android growth levels off in terms of mobile ad impressions.

Millennial frequently takes a look at app development ranked by revenue on the network and in Q2, Android represented 41% of the Application Platform Mix, a 14% increase from quarter-to-quarter. iOS represented 49% of the app, and grew 12% quarter-over-quarter.

The iPhone continued to dominate Millennial’s network in June as the top mobile phone on the ad network with a 16% impression share in June. The closest Android phone was the original Motorola Droid at 2.95%. But the Android platform also had 16 of the top 20 mobile phones.

By manufacturer Apple took the lead, representing 30% of the Top 15 Manufacturers impression share
Samsung followed as number two manufacturer for the fifth consecutive month. In June, the Samsung Nexus S impressions more than doubled month-over-month and moved to the number four position on the Top 20 Mobile Phones ranking.

It’s certainly interesting to see that Android’s growth is slowing. And that iOS is picking up. We’ll see if that trend continues into July and the third quarter. InMobi’s latest data shows that Android is surging past the iPhone in terms of subscribers and mobile ad impressions worldwide.

As for Millennial, it’s unclear whether the company, which is the largest independent mobile ad network remaining, will become a public company or will be acquired. The company raised $27.5 million in new funding a year ago, and is considering an IPO in the near future. Considering the growing number of tech companies going down that road, it’s certainly the right time for an IPO. 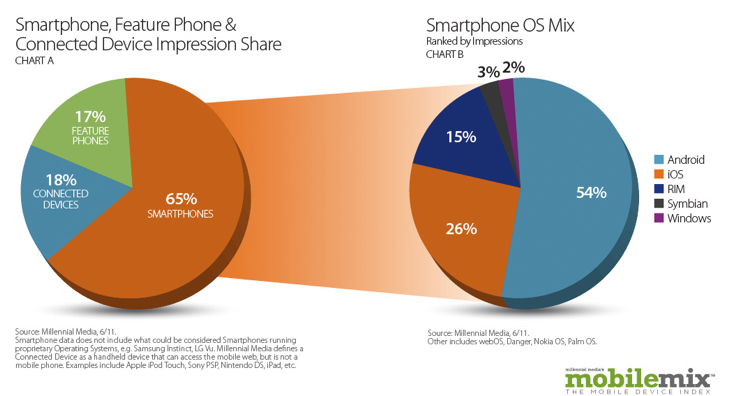