There really should be no argument when I say that a case for your iPhone 4 is nothing short of necessary. Unless you’ve got cash to burn, the iPhone is just too damn expensive to leave unprotected. The only problem is that most of them make your phone pretty clunky, which sucks since Apple works hard to make the iPhone as slim as possible. Unfortunately, the only trade-off for all the heft is protection against impact. But what if you drop your iPhone in the toilet?

The folks at Catalyst have an answer for you: EscapeCapsule.

This thing is more than just a tough exo-skeleton. Made from a high-impact clear polycarbonate, the case protects against water, rain, snow, sand, mud, impacts, scratches… everything. Did I mention water? You can also double-check whether or not the case is securely sealed around the phone through the clear shell. 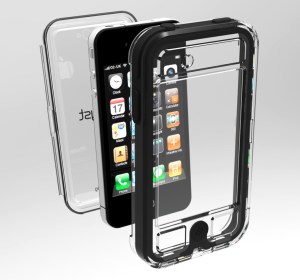 Catalyst says the phone’s hardware buttons are protected through a specially designed membrane, as is the touchscreen. The camera works surprisingly well with the cover on, proof of which can be found in the video on the project’s Kickstarter page. The case also comes with an attached lanyard to go around your wrist while you’re playing in the ocean with your iPhone. Because with the EscapeCapsule, you can play in the ocean with your iPhone. Crazy.

The case comes in a number of colors, but if you make a pledge on Kickstarter you’ll get Catalyst’s Kickstarter-only edition Capsule — a green case with a white glow-in-the-dark rubber bumper and a glow-in-the-dark lanyard. It’ll take a $50 pledge to pre-order your very own EscapeCapsule, which is an OK deal considering Catalyst plans to sell the case for $70 when it officially becomes a reality.

As of right now, Catalyst has 28 days to reach its $30,000 funding goal. It has thus far received $3,780. Head on over to Kickstarter to check out a video of the EscapeCapsule in action.