Online and mobile payment platform Dwolla just launched a new feature called “Proxi” which allows users to send and receive cash-based mobile payments based on their current proximity to another connected device. The technology bypasses the need for special hardware, like Square’s plastic dongles or NFC chips built into a phone, in order to make mobile payments.

Instead, the interface provides a simple way for Dwolla’s users to find nearby contacts and send them money using only the mobile app itself.

Dwolla, for those unaware, is a company with a unique take on digital payments. Its vision is that consumers, not third-parties, should dictate how their payments network operates. What this means for Dwolla and its users is a payments network that’s devoid of personal information. And most importantly, Dwolla’s inroad to this planned disruption is cash, an under-represented market in electronic payments. 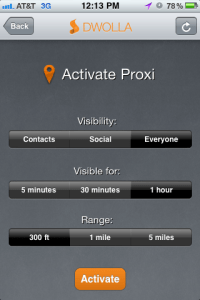 With the new “Proxi” (beta) feature, Dwolla founder Ben Milne explains that the company is looking to accomplish much of the same thing that NFC makes possible, but without the need for expensive hardware. With NFC, there’s added security, because you have to be physically present to pay. Proxi uses GPS for that same reason.

When launching Proxi, the mobile app pulls up a list of those who are close to you and able to accept payments, including both nearby users and merchants.

The Proxi beta will initially be available on iOS, and will roll out to other mobile platforms (Android, Windows Phone) in the coming weeks. The beta is private for now, but TechCrunch readers can request immediate access here: https://www.dwolla.com/proxi/beta. There will be limited spots available, so access is on a first-come, first-serve basis. 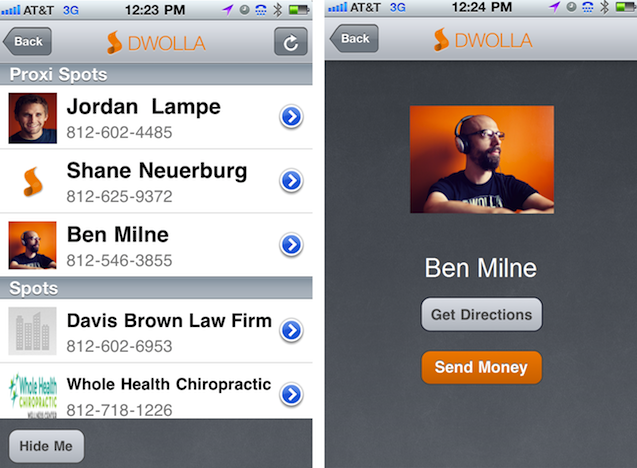 Pros and Cons of the Dwolla System

Proxi is the sort of feature that could take Dwolla from “interesting idea” territory to becoming a more practical application. Secure, person-to-person (or person-to-business) mobile payments without the high fees associated with PayPal, or the need for special hardware? Sounds good here.

The only drawback is that Dwolla doesn’t directly connect to your own bank account, in the same way that your debit card does, which could confuse first-time users who don’t understand why other financial institutions are involved. Instead, Dwolla has partnerships with The Veridian Group, a subsidiary of Veridian Credit Union, in Waterloo, Iowa, and The Members Group (TMG) another financial and credit union service organization owned by Iowa credit unions and their members. Through these organizations’, which hold the funds in Dwolla’s users’ accounts, people can send and receive money from their own bank accounts.

And while Dwolla is easy to use, it’s hardly available for use everywhere, the way that your debit would be.