Surprise! Even a clever little gimmick like a dedicated Facebook button can’t save a bad phone from an early demise.

After just 36 days on the shelves, a trusted source close to AT&T tells us the carrier is already prepping to ditch HTC’s so-called “Facebook Phone”, the Status. The reason? The thing just isn’t selling.

Since the initial tipster came forward, we’ve confirmed with multiple sources that sales of the Status are considerably lower than anyone expected. AT&T declined to comment.

To say we foresaw the Status’ fate would be something of an understatement. The Status originally launched as the ChaCha back at Mobile World Congress, where I pointed out that ChaCha (the real-time answer company) likely wouldn’t take too kindly to the name — and sure enough, ChaCha turned around and filed a lawsuit against HTC within the week. When AT&T announced plans to carry the device (now renamed Status), we predicted it wouldn’t succeed due to a lack of interest… and here we are, just over a month post-launch, hearing that the death knell is being prepped for a ringing. 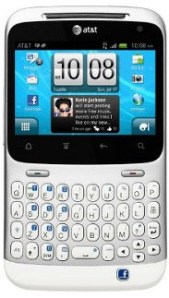 For those who might’ve missed the Status updates: the Status is an Android handset designed in the same vein as a classic BlackBerry (2.8″ touchscreen on top, with a QWERTY keyboard below) — a design which, if we’re honest, probably had a big part in the Status’ weak sales. The Status’ one potential saving grace was its context-sensitive Facebook Button — a small, dedicated key placed near the bottom edge of the handset built strictly for one-click Facebook sharing. Anytime the user was viewing content that could be shared on Facebook (be it a photo, a video, or a website), the button would automatically light up. When pushed, the content would be packaged up and pushed to the user’s Facebook profile.

For what it’s worth, even Facebook has never seemed all that interested in HTC’s efforts. Mark Zuckerberg phoned it in with HTC’s original announcement, providing a short, generic video in lieu of an actual appearance. Even with a fair amount of time spent at Facebook HQ, not once have any of us here at TechCrunch seen a Facebook employee carrying a Status. They all seem to use iPhones.

Update: AT&T has now agreed to go on record with a comment, saying “The HTC Status is a great product and our plans for it to be part of our portfolio haven’t changed.”