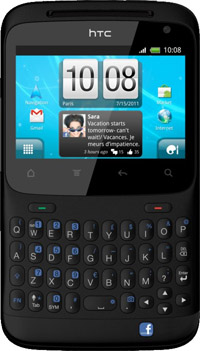 We’ve covered the HTC ChaCha’s journey to the States pretty exhaustively, from its debut at Mobile World Congress, to the rumors that it was heading for AT&T, to the last-minute name change from ChaCha to Status (presumably as a result of this lawsuit filed by ChaCha. As in the company, not the phone. A phone can’t file a lawsuit, silly; it doesn’t even have hands.)

Well, the journey’s pretty much over: this morning, AT&T threw up a Facebook fanpage for the Status, pretty much confirming everything. As usual, they’re keepin’ mum on the price/release date for now.

I don’t often play prophet, though the birds-eye-view this job provides would allow me to. I don’t think I’d be going out on a limb in saying this, though: this phone.. won’t be a raging success. Between the antiquated-looking form factor, the odd screen size, and the gimmicky Facebook button, people just don’t seem interested.