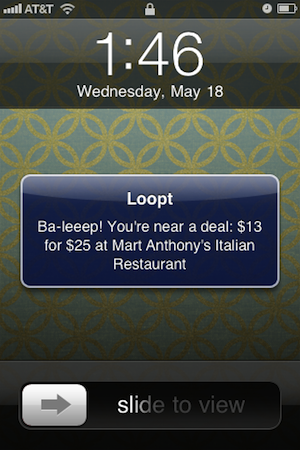 Loopt a checkin app that seems to be pulling out all the stops in order to survive in a saturated space, has now partnered up with Groupon Now! in Chicago in order to provide Loopt users with locationally relevant realtime deals around them, push notifying them when they are near a deal.

While the plan is to notify users of deals when the app isn’t even open, and the time sensitive Groupon Now! deals will also appear on place pages within Loopt, so users can see and share with friends their favorite relevant deals in the vicinity.

Loopt has basically beat Groupon to bringing this LBS/realtime technology to its own app, where you still have to type in your zip code to get more granular locational deal notifications. But Groupon recently acquired Pelago, so I wouldn’t be surprised if a similar functionality is on its way.

Currently the specific Loopt service is only available in Chicago, and users who are interested can go into their Loopt settings, turn Reward Alerts on and start receiving their once a day, location specific Groupon Now! deal well, now!.

As 14% of subscribers interact with daily deal push notifications, this is a mutually beneficial and strategic partnership between the two companies. But one can’t help but wonder when Groupon will apply this same technology to its own mobile app and what exactly that will mean for Loopt long term.

Loopt is planning on expanding the Groupon Now feature nationwide, and it should be available on both Android and iPhones in each market.