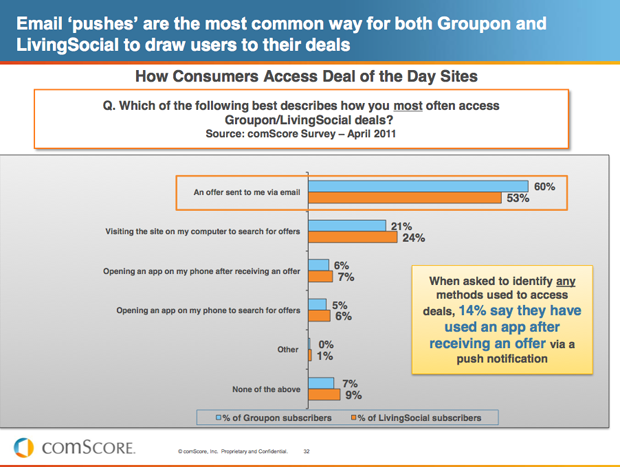 As I’m writing this the perky blue box on my iPhone has lit up with a “Groupon: 64% off Papa John’s pizza” message, in the same format as I receive texts from friends — This is why these things are so manipulative, it’s almost like your BFF has texted you to go grab discounted pizza, which is comforting and unsettling at the same time.

According to comScore’s State of Retail webinar, these notifications seem to be working — While 5% /6% (Groupon/LivingSocial) of users surveyed said that they open their respective apps to actively search for offers, 14% said that they engaged with the app, i.e. viewed the deal, searched for deals or purchased offers after seeing a push notification. That’s double the engagement with minimal development effort.

While these numbers are nowhere close to the 60%/53% who responded to a daily deal offer sent via email or the 21%/24% that visit the website, they’re impressive because they were part of a write-in “identify any method of engagement” question which means that they’re getting attention. Groupon has had push notifications in at least one of its apps since the launch of its Blackberry app in 2010 and LivingSocial has had them since its iPhone app was unveiled in 2009.

As 31% of 234 million U.S. mobile subscribers now own a smartphone (72 million), the reach of these notifications via app is potentially 10 million people.

While the study unfortunately didn’t drill deeper into precise mobile usership numbers for either app, mobile engagement is obviously a big priority for daily deals sites, with an emphasis on local. Groupon Mobile VP Michael Shim said just yesterday, “Mobile is huge for Groupon…I believe we could see us doing 50 percent of deals sold/purchased in the next couple of years.”

Other interesting nuggets from the study: According to comScore, Groupon.com had around 11 million monthly unique visitors in April 2011 and LivingSocial.com had around 9 million, a 250% and 182% jump versus a year ago. Right now 47% of consumers subscribe to at least one deal of the day site, with 8% of consumers making $100K or more hooking in to more than five deal of the day sites.

No wonder there’s so many of these things.