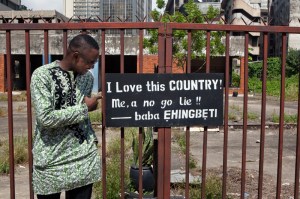 Last week I wrote about Computer Village, where many of the gadget-hounds in Lagos go to get their gadgety fix. But what about new technology being developed in the country? The city’s tech entrepreneur scene is small, but several people are working on changing that.

Oo Nwoye–  or @oothenigerian as he’s known on Twitter– is one of the more enthusiastic champions of this nascent scene. (That’s him on the left.) I met him two years ago in London, where he cornered me at an event and made a case for me going to Nigeria, so he was one of the first people I contacted when I finally did.

Since then, he’d moved back home. He’s working on a to-be-determined startup and spending the meantime trying to galvanize a startup community. He organized a fantastic demo day to give me a taste of what people are working on.

In the days leading up to the pitches, I spoke with half a dozen tech entrepreneurs in Nigeria who had a lot of complaints about the ecosystem. There was the ever-present emerging market complaint of not enough venture capital, but the entrepreneurs also complained about the extremely high costs of doing business in Nigeria given how small the online market is so far, the spotty infrastructure, and the lack of enough developers who want to work for startups instead of the big oil companies. 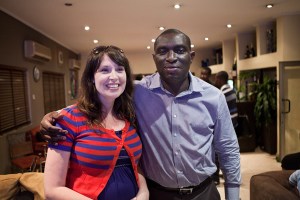 in Ghana, lured by the juicy 150 million person population. He pays the same amount for his office space in Nigeria that he used to pay for a house and a comparable office space in Ghana. More galling: Because the infrastructure is so poor in Nigeria, he also has to provided his own power and water backups. “I have to build my own city just to live here,” he said, exasperated.

Asemota also talked about a bigger challenge to building a tech company in Nigeria: The stigma of illicit 419 scams. He’d negotiated a deal with a customer in Florida one time and was wrapping up the meeting by handing the man his business card. Simply seeing that he was from Nigeria killed the deal instantly, Asemota says. The man wouldn’t even keep his business card. I noticed at the end of our dinner, when Asemota handed me his card it listed his company as located in Ghana. And, he says, ground down by the frustrations of doing business in Nigeria, he’ll probably move back there.

So I entered Demo Day halfway through my trip, desperately looking for some hope. I found the first glimpse of it, appropriately, in a guy wearing an Obama Hope T-Shirt. His name was Gbenga Sesan, and he runs a organization called Paradigm Initiative of Nigeria. It takes small delegations of Lagos’s techies into less developed and frequently more violent parts of Nigeria to convince 13-year-olds to get 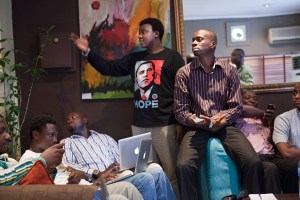 interested in computers. “If you don’t start at 13, they can’t be millionaires by the time they are thirty,” he says.

Another group called Co-Creation Hub immediately caught my attention. It is building an incubator to help entrepreneurs with business advice, funding and mentoring. Their focus is using technology to solve real problems Nigeria faces, not just copying what people read on TechCrunch. It welcomes more than just coders, but teachers, doctors, or anyone from any background that has a dramatic idea of how to make life in Nigeria better. A new co-working space to be opened later this year will operate like an open living lab for social change.

I love that strategy. I always advise entrepreneurs if they want to build a Western-facing consumer Internet company to move for the Valley; it will just be easier. But if they want to be pioneers in their own markets, focus on the problems and endemic strengths there. (And probably read sites like TechCrunch a little less too.)

So right away between Nwoye’s evangelism, Paradigm Initiative of Nigeria’s efforts to build a young generation of coders and Co-Creation Hub’s cushy nest for social change, there was a pretty impressive mix of people actively working to foster an ecosystem. Things were looking up for Nigerian entrepreneurs. The demos started, and I was impressed by many of the companies too. They ran a tight ship doing pitches of no more than five minutes, and there were only a few copy-cat Western Web ideas in the bunch. My favorites are below. I should mention there was also a Garage48 hacker event over the weekend in Lagos that I wasn’t able to attend. The demos from that day are here. 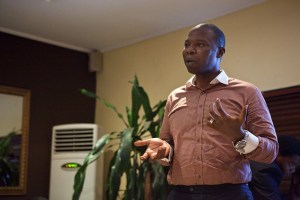 Gyst: This was one of two truly long-term, big-idea, swing-for-the-fences startups I saw in the country. (I’ll write about the other one on Saturday.) Sim Shagaya (pictured to the left) has a Harvard MBA, but don’t hold that against him. After studying in the US and bouncing around the tech and banking world, he returned home to build a traditional old media billboard business.

He’s now leveraging the cash-flow of that to build two exciting new media companies. One is a daily deal site called DealDey. The other is super exciting. It’s called Gyst, and it’s a very local business directory search engine. He hires a bunch of kids throughout the country and gives them each a smart phone with a camera. They go door-to-door, manually getting information and GPS coordinates on every small businesses in the city, gathering the information in a database. Amazingly, nothing like this exists in Nigeria– no Yellow Pages, no local search engines, no 411 service. Like most emerging markets, many cities in West Africa don’t even have a formal system of streets and addresses or a working postal system.

This is an insanely expensive and ambitious project, and it’s 100% bootstrapped by the parent company. The opportunity is huge. It’s Google on a local level combined with Yelp, JustDial, SMSOne, Gigwalk, and a bunch of other exciting companies who rethink cost effective ways to amass huge amounts of local data in one easy-to-access place. “It will take a long time to show the true value of this business, but we’re willing to wait,” Shagaya says. Right now the company has 20,000 business listings, and its ultimate ambition is to index every city in West Africa with more than one million people. And the company will make all that information completely free for users. Whoa.

There are obviously huge synergies between these three businesses. A daily deal site that is tied to billboards and the region’s only 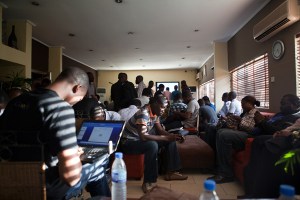 comprehensive small business directory is a lot more powerful and exciting than a run-of-the-mill Groupon clone. It’s a textbook example of how industries develop in parallel, not serial, in emerging markets, utterly transforming how they develop. Imagine if Clear Channel, Google and Groupon were all the same company. And I love the ambition: Shagaya said he is focused on building nothing less than the Naspers of Nigeria.

Skoola: This company has taken several years of Nigeria and Western Africa’s standardized tests and converted them into a basic test prep app that can run on any mobile phone, smart or dumb. I asked how big the market is and the whole room laughed. This is the test everyone takes if they have any ambition of higher education.

The business– which is so clear that the entrepreneur pitched in under three minutes– is a no brainer on a lot of levels. More people have phones in the developing world than toilets so it’s the ideal medium, and it’s a way to kill time sitting in traffic and further your education at the same time. It’s a perfect example of how to build a mass market product in a country like Nigeria: It’s distributed on the broadest possible platform, solving a problem a huge percentage of the population has, and priced for volume at less than $.30 per test. The company is working on French translations so neighboring West African countries can use the product too. I’m amazed I haven’t seen something like this in India. I’m sure it already exists. If it doesn’t, it should.

Traffic Nigeria: Speaking of the need to kill time in traffic, this company uses crowd-sourcing to monitor the traffic in Lagos, delivering results over the Web or SMS. Nigerian traffic is not the worst I’ve seen in the emerging world, but it’s pretty awful. As the entrepreneur put it dramatically, “You’re dying gradually sitting in this traffic, and we want to increase Nigeria’s life expectancy.”

I like the idea of attacking a local problem like this, but I’m not convinced crowd-sourcing is the right way. One entrepreneur I talked to later suggested that Traffic Nigeria should charge people for the updates (many people would gladly pay if the information was solid) and then pay motorcycle cabs or delivery guys to report once an hour or so on traffic conditions on their already traveled routes. That could be an instant local hit, and again, something that should exist in the rest of the developing world too.

But the entrepreneur behind Traffic Nigeria seemed sharp, and I have no doubt if the crowd-sourcing approach doesn’t pan out, he’ll iterate his way to a better method. The company is wisely tapping into something people feel passionate about: Everyone in Lagos talks about how brutal the traffic is and routes, meetings, days and plans are all orchestrated to avoid it at all costs.

Several other companies I met were working on important building blocks for any local Web ecosystem. My favorites in that category were Pagatech, a pretty sophisticated company that turns mobile phones into electronic wallets, and Bloovue, a Nigerian-localized ad network that hand-holds small businesses as they start to advertise on the Web and mobile devices. One cool thing about Bloovue is you can build an ad easily on a mobile phone; a small business never has to touch a computer to advertise online. The company cited the example of a woman named Judy the Cheesecake Lady. After one ad ran on Bloovue’s network she got six calls for cheesecakes within twenty minutes, and sixty calls over the next few days. She’d never considered advertising online before, and was stunned by the rapid results.

So that’s the raw, hopeful side of the Nigerian tech scene. This weekend I’ll post two stories about my brushes with the country’s no less entrepreneurial tech underworld.