Exclusive: BranchOut, a professional social network for Facebook, has raised $18 million in Series B funding led by Redpoint Ventures with Accel Partners, Norwest Venture Partners, and Floodgate also participating the the round. This investment brings BranchOut’s total funding to $24 million. Geoff Yang, founding partner of Redpoint Ventures, will join Accel Partner Kevin Efrusy on BranchOut’s board.

Launched in July 2010, BranchOut has often been compared to a LinkedIn for Facebook because it allows you to network and find jobs through your friends on the social network. BranchOut’s Facebook app lets you search for companies and then shows you all your friends who either work there or know somebody who does. The application does what LinkedIn hasn’t done with Facebook— it unlocks the massive amounts of career data about your social graph on the world’s largest social network that was just impossible to get to before.

And BranchOut allows users to create professional profiles, importing professional data from Facebook profiles, including employment histories, and also allows you to import skills, education, and job history from LinkedIn as well. Within your profile, you can earn badges for specific types of work or education, and contacts can post recommendations (limited to 140 characters). Soon, founder Rick Marini says that the site will allow users to tag friends profiles with specific attributes and skills (i.e. hard worker, loyal, etc.) BranchOut profiles only display only professional data, and won’t surface personal pictures or information from your Facebook profile.

The app also allows companies (and individuals) to post jobs to networks, which you can share amongst your friends. Currently, BranchOut allows you to search over three million jobs and 20,000 internships, which impressive considering the app only launched nine months ago. BranchOut lets you search these listings by location, position, company or any other keyword.

And today, is releasing its newest product along with announcing the funding—a Jobs Tab. BranchOut’s
Jobs Tab publishes job openings to a company’s Facebook Page and allows Facebook users to apply, share the job, and see their inside connections at the company that posted the opening. The tab can be easily integrated into a company’s Facebook page. For brands and companies that have thousands, hundreds of thousands or even millions of likes, the Tab seems like a compelling way to advertise job listings which already public on a company site.

As for the funding, Marini says that the $18 million will be used to hire additional staff, particularly in engineering and sales. He tells us that for the past nine months, the company has focused on building out the consumer-facing product and will now also be focusing on building out enterprise products. For example, BranchOut will soon offer a specialized interface for recruiters and sales people to search the app’s database for prospective connections and leads.

Of course, it’s hard not to recognize the power of LinkedIn, the giant in the professional social networking space with over 100 million users. But while LinkedIn has been adding a number of social elements to its platform, including a Twitter integration, the company has yet to implement a deep integration with Facebook. CEO Jeff Weiner said last year that while Facebook is great for showing how we spend our time and expressing ourselves, most employers probably shouldn’t see all of your extracurricular activities.

But Marini contends that Facebook, with nearly 700 million members and growing, is an integral part of professional networking. As Facebook’s social graph continues to dominate your experiences on the web, people will want to harness the sheer power of their most extensive social graph in their professional lives, he says.

BranchOut is certainly on to something. The app currently has 300,000 monthly active users and is steadily growing, as BranchOut expands to international markets. And LinkedIn, which is about to IPO, hasn’t cornered the market on using Facebook in professional social interactions. And Marini sees LinkedIn’s success in the market as illustrating the potential in the professional social networking space.

As Facebook continues to grow, explains Marini, everyone that matters to you, whether it be friends, family, colleagues and co-workers will be part of your social graph. “The future of professional networking is going to be driven by Facebook,” Marini says. 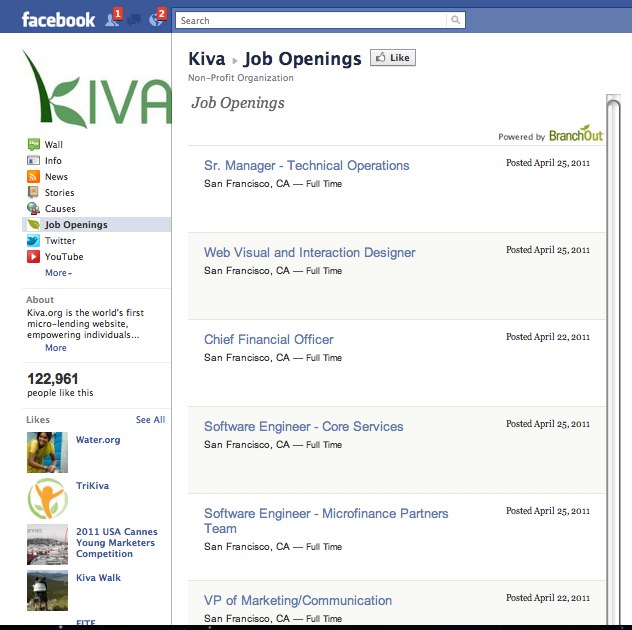