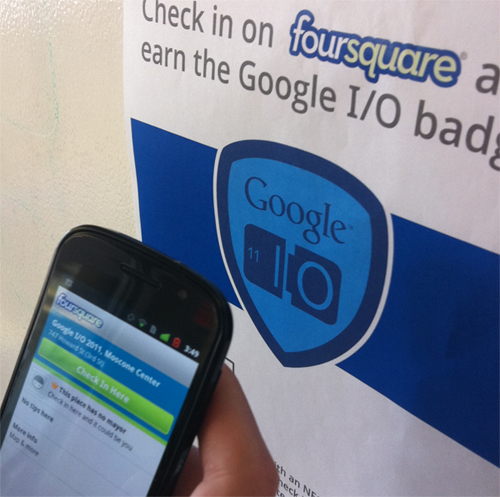 Google’s annual I/O conference kicks off tomorrow and it will likely bring a range of big announcements. But one of the cooler things that will be on display at the event was actually pre-announced today by Foursquare: NFC-based check-ins at the event.

Google and Foursquare are teaming up to make this a reality at the conference over the next few days. Around the conference center, you’ll see Foursquare posters that will actually have NFC chips embedded in them. This means you simply need to bring your phone close to these posters in order to check in via Foursquare. Very cool.

And when you do, you’ll get a Google I/O Foursquare badge, naturally.

Of course there’s one big caveat: you’ll need an NFC-enabled phone for this to work. Foursquare notes that many of the newer Android devices have NFC chips in them, but these devices still aren’t too widely used yet — the biggest one is the Nexus S. But if any place will have a big group of people with new Android devices, it will be I/O. Those without NFC-ready phones can still check-in regularly or scan QR codes on these posters.

Foursquare notes that they’ve been testing check-ins via NFC for some time now in their own offices. Here’s a tweet to prove it from February.

This partnership is interesting for a couple of reasons. First, Google has their own location-based service, Latitude, which just this year finally began doing check-ins. No word on if you’ll be able to check-in to Latitude in a similar fashion at I/O. Second, as some may recall, Google actually bought the predecessor to Foursquare, Dodgeball, and then proceeded to do nothing with it, which led to some bad blood and the founders leaving Google (both of which are now back with Foursquare). I guess the wounds have been mended.

Facebook did something similar last year with Presence (check-ins via RFID) at their f8 conference. But that was also with a special chip you received when you got to the conference, and not via your phone.

While this is clearly just a test of the technology, the stake are high for NFC check-ins. This is likely the future of these services, as NFC will make it much easier and more convenient for mainstream users to check-in to venues.

We’ll be at Google I/O covering it live all week.