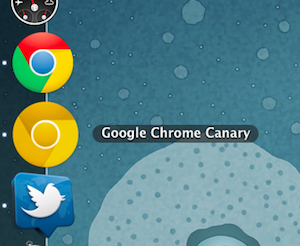 This morning, we noted that Google was getting ready to release an OS X version of the Chrome Canary build. Sure enough, just hours later, here it is.

Canary is the pre-Dev build of Chrome meant for users who enjoy testing new things early and often and don’t mind some bugs and hiccups along the way. It’s meant to be run alongside the more stable builds of Chrome, so you can have the best of both worlds.

Because we expect it to be unstable and, at times, unusable, you can run it concurrently with a Dev, Beta, or Stable version of Google Chrome. Your Canary data remains separate, but if you set up Sync in each version of Chrome that you use, you can automatically continue using the same set of bookmarks, extensions, themes, and more.

Google notes that since trying out the Canary concept for Windows last year, “hundreds of thousands” of Windows users have helped the company make Chrome even better. So now they’re extending that idea to Mac users as well (and one can only assume Linux users in the future as well).

While the stable version of Chrome just hit version 11, and the beta and dev builds are on version 12, Chrome Canary is already on version 13. But don’t expect a ton of obvious new user-facing features, Google iterates Chrome early and often, so many times the changes are under-the-hood things or even just experiments to make the browser better.

Oh, and it has a nifty yellow icon — though oddly the About menu area has the regular Chrome icon. 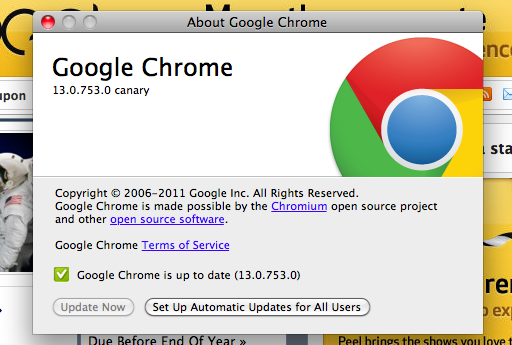