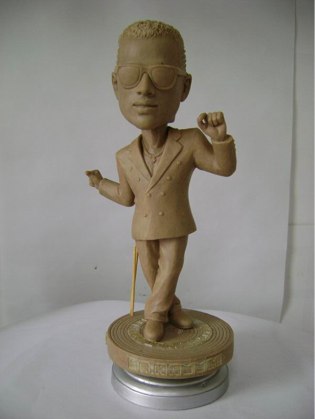 Long time readers know how much we love MC Hammer around here. And the serendipity of having him perform at the end of TechCrunch DIsrupt last year, the day we were acquired by AOL, was wonderful. He’s a performer, an entrepreneur and one of the most empathetic and caring human beings I’ve ever met (He’s helped thousands of people in Oakland and around the world over the last two decades). Everyone smiles when they’re around Hammer.

As for me, if you’ve ever seen a 14 year old girl around Justin Bieber, I’m pretty much the same when Hammer’s around. Well, first I usually tell him I have some extra gold jewelry I’d like to convert into cash and if he knows anywhere that can do that for me (he’s a shareholder and spokesperson for Cash4Gold and takes a lot of much deserved ribbing for his commercials). But then I act like the 14 year old girl.

Even so, I can’t explain exactly why I’m so excited that the Oakland A’s are having MC Hammer bobblehead day in July (the image is a prototype that Hammer sent me, they don’t have the final product yet). Hammer was involved with the A’s long before he was famous, and his ties to the organization are still very strong today. It’s about time they gave him a bobblehead. :-)

A long time ago Compete had a bobblehead made of me. It was a one of a kind, and a very cool gift. Somewhere along the line it broke during one of our office moves, but there’s still an empty place on the shelf for one. I’m going to put Hammer there.

See you at the game.

And, yeah, I’m in a weirdly good mood today. My phone suddenly works. Which is great. I just wish things could get done around here without a public whining session.