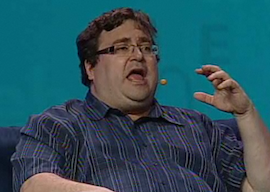 Today at Web 2.0 Expo in San Francisco, LinkedIn founder Reid Hoffman took the stage for a chat with NetworkEffect’s Liz Gannes. The main point of the discussion was Hoffman’s belief that “Web 3.0” is data. More specifically, the platform part of data. But that’s old news, Hoffman gave that talk at SXSW a few weeks ago. More interesting were his thoughts on what Internet companies should do with their data.

Or rather, what they shouldn’t do with their data.

“Good Internet companies never ambush their users,” Hoffman said. When Gannes suggested that many often do, Hoffman cut back in, “but not good ones.” “That’s one of the prinicples of data goodness,” he continued.

He also noted that the “open” versus “closed” debate around data is often not based around economic variables, but rather this idea of not ambushing users.

This is interesting since Facebook is often cited as a company that perhaps does ambush their users with changes they make — and Hoffman is one of the original investors in Facebook. It’s also interesting given the news today that Google violated user trust with the Buzz roll-out.

Neither Facebook nor Google were directly addressed by Hoffman on stage, but he did give some examples of ways that LinkedIn is careful with their user data. And he noted that it’s not just about “open” versus “closed” data. Sometimes there is data that a user may want to share with another service, but it’s not technically “open” data. Users should have the right to share that data under the right circumstances, he noted.

Hoffman also cited location as one layer of data that could be be troubling with regard to this “ambushing” idea. “It’s something you have to be careful about,” he said. Hoffman is also an investor in location-based Gowalla.