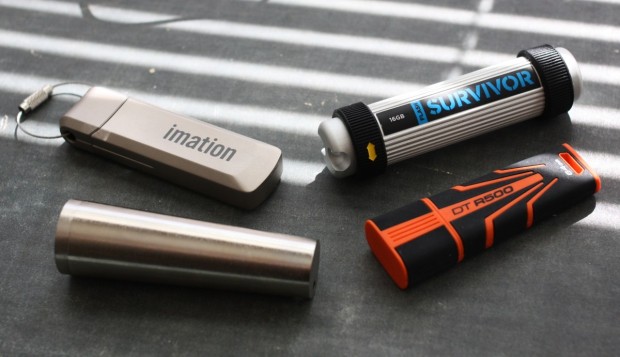 Flash drives are a dime a dozen these days, so if you’re going to actually spend money on one, it may as well be one that can take a little abuse. After all, if you plan on having it with you everywhere you go, there’s a good chance this thing is going to get dropped, sat on, spilled on, and otherwise beaten up.

The big flash drive sellers all have entries in this category, some newer than others. I thought it’d be worth taking a closer look at these to see whether they live up to their rugged pedigree, and whether that pedigree is worth the money to begin with.

I should say at the outset that USB flash drives are naturally rugged, being essentially just a few memory chips, a drive controller, and a USB interface. There’s not a lot that can go wrong — but a poorly-built drive will fall apart, and of course there’s the price you pay for peace of mind. Most drives will survive a few falls or a splash of coffee, but it’s legit to want one that’s made for it. Also, none of these drives are USB 3.0, just in case you’re looking for that.

The first thing I did was drop all of these drives ten times, from a height of ten feet, onto a hardwood floor. Most small drives should be able to withstand this without cracking or anything, but sometimes you can jar the internals enough to loosen or dislodge them. All four worked properly afterwards.

Update: I then (after being chided for taking it easy on the drives, kind of true) took a hammer to them. Five or six smart hits from various angles, about as hard as you’d want to hit a nail. 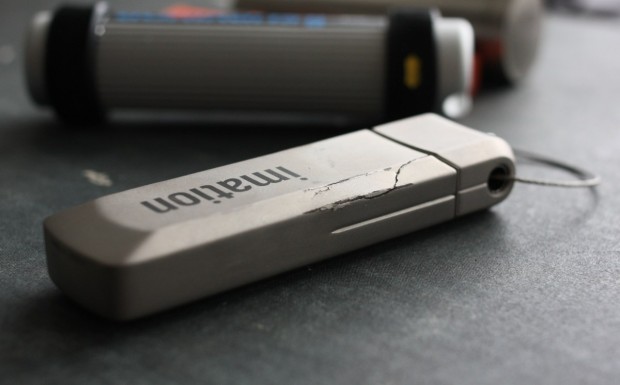 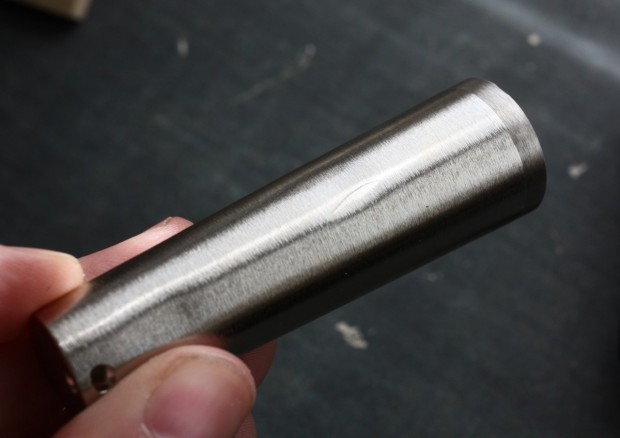 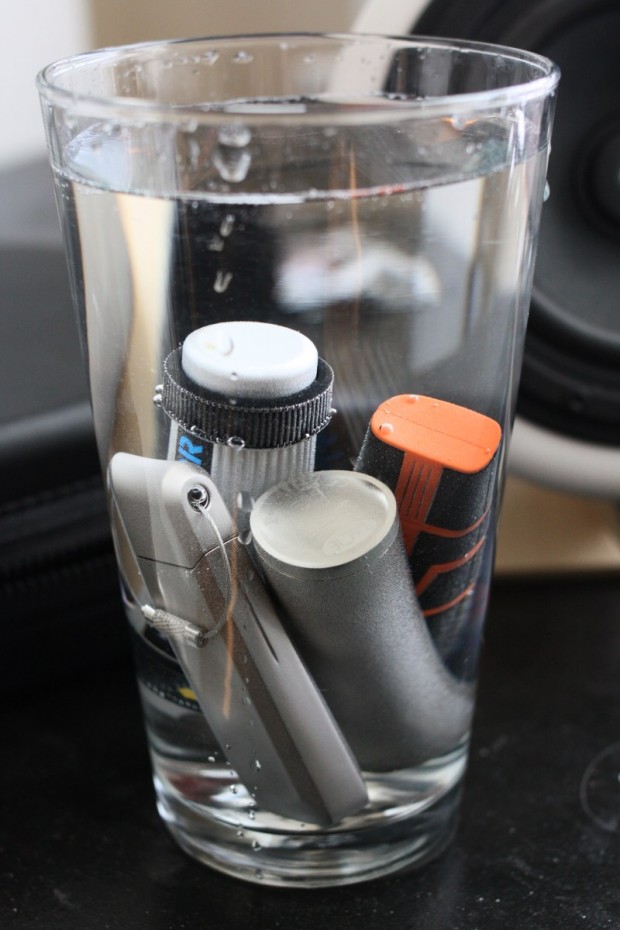 I next put all these drives into my washing machine for a full “color” cycle. I did not put them in the dryer.

Next, I put the drives into a nice tall glass of water together and let them sit for a few minutes while I wrote up the above. I poured everything into another cup and back, agitated a bit, and generally simulated being dropped in a pool or puddle. The results were mostly the same as above: Xtremkey and Survivor totally dry, R500 had a drop or two. But the F150 was literally full of water. I was especially careful to close it tightly beforehand, in case I had not done so before. But nope, it filled right up.

A basic, practical speed test was done, not very scientific, but representative of two normal tasks: copying a few large files (totalling about a gig) and a bunch of smaller files (also around a gig) to and from the drive. All drives were formatted previous to testing. Here’s how they performed:

Note that the drives sent for review were not the same capacity. The R500 was the largest (64GB), the Survivor was 16GB, and the other two were 8GB. However, none were 2GB or 4GB, which capacities seem to be the ceiling for the low-quality drivers on giveaway and cheap drives. Differences due to capacity probably exist, but I don’t think it would be much more than a few seconds in these basic tests.

So with the comparisons done, let’s take a look at the drives individually: 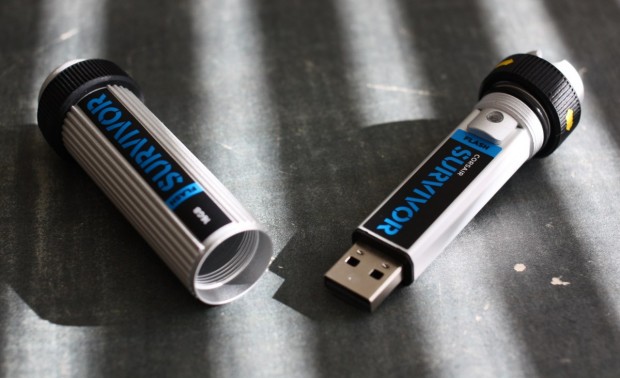 First we have the venerable Corsair Survivor, a design that’s been around for quite a while and seems to have proven itself. I used a previous generation of these for quite a while and the one serious flaw (the rubber casing on the ends detached itself) appears to have been rectified in a slight redesign. The bands are now thicker and wider.

As you can see, it’s the largest of the bunch, though it’s not nearly as heavy as the LaCie, owing to its thinner metal shell, which is still plenty rigid. The rubber bits are corrugated for grip and the business end is labeled. It takes quite a few twists to get the top off, something that might be difficult with gloves or wet hands. 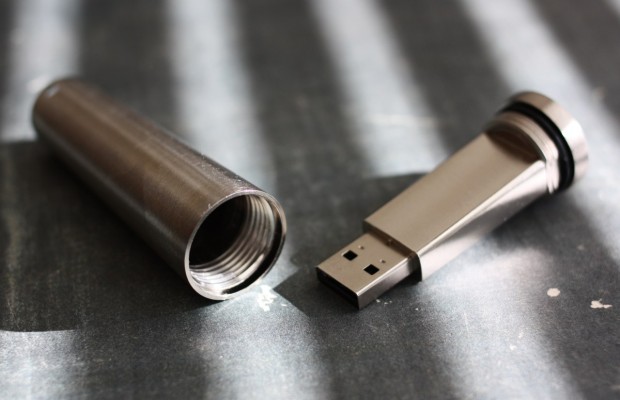 LaCie’s entry is, like many of their products, also a looker. And like many of their products, it commands a premium for both the Mac connection and ostensibly a higher quality build. In this roundup, I’d say the Xtremkey is definitely the one I’d most want with me in a zombie apocalypse. It feels literally bulletproof, and when punching zombies (very dangerous) it’s a good substitute for a roll of pennies. The flip side of that is that it’s quite heavy, and is the second biggest by volume.

The tapered design seems a little strange at first but makes sense once you get used to it; it prevents rolling in a straight line (though it will still roll in a large arc and probably fall off your desk), and the larger end becomes familiar as the screw-off end, unlike the cylindrical Corsair, which must be looked at to ascertain that information. The featureless metal means it’s always shiny and clean-looking.

It’s significantly more expensive than the Corsair and Kingston, and doesn’t perform any better, but it’s solidity is reassuring. 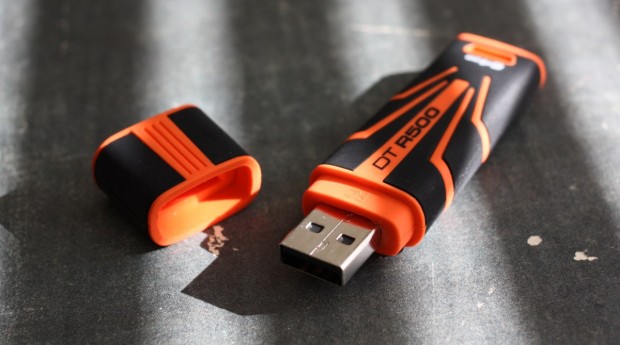 Although it’s not waterproof like the others (at least, it’s not advertised as such), the R500 excels in other ways. It’s the lightest and most compact, though that’s due to a non-metal construction, limiting its crush resistance. On the other hand, I think I would trust this one to fall down a cliff face or hill the most, since it’s got the nice rubberized coating. Also makes it easier to grip, and the bright color makes it stick out.

Its wide body means it can’t be used at the same time as most other USB devices, though. In the future, Kingston, consider a thinner profile. I can feel the rubber give a bit at the tip, meaning a few precious millimeters might have been saved. 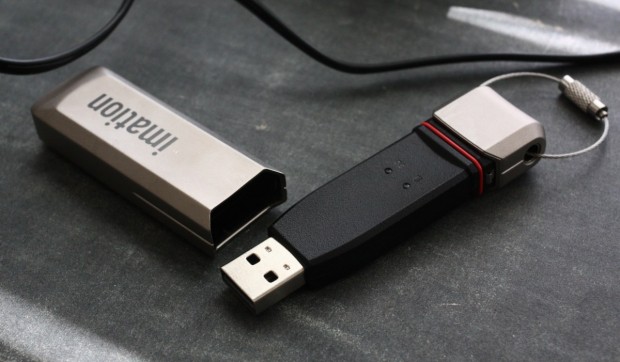 The F150 has a familiar rectangular shape and rigid metal case. I love the lanyard they provide. Unfortunately, the wimpy rubber seal inside didn’t seem to provide any waterproofing at all. As I noted above, most drives can handle a little water on the contacts, but still, if you’re paying for waterproof, you should get waterproof. Especially at the prices these things are going for.

This drive also sports 256-bit hardware encryption, which is nice. The setup was easy on both Mac and PC, access is pretty quick (takes maybe 20 seconds to open the authentication app, put in the password, and let it re-mount the drive), and there is support for multiple users. Note: there is a more expensive version, the F200, that includes a fingerprint reader. So keep that in mind if you’re really concerned about privacy (and trust biometric over password security).

For the record, Kingston also sent over its DT Vault Privacy, which also includes encryption and is “resistant” to water and such. I felt one from each manufacturer was enough, but wanted to mention here that it went through the wash and a couple tests, and performed well data-wise but let in water during the wash. Its plastic build isn’t as reassuring as the others. 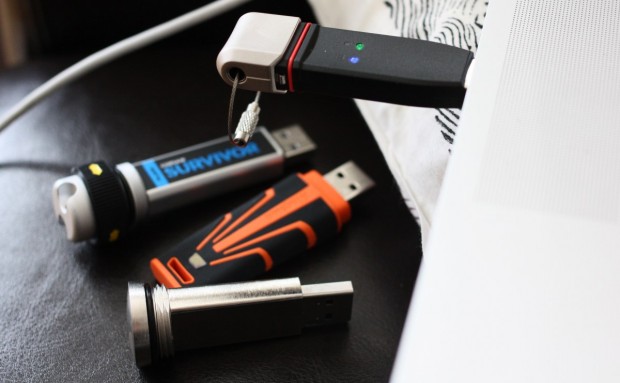 So which should you go with? Well, it’s a pretty even spread, depending on what you need. For people who need their drive bulletproof and want to pay, the Xtremkey is the way to go. I can personally attest to the Survivor’s long-term ruggedness, having owned one for a while, but it doesn’t stand out much in this company. The RT500 provides the best speeds, but can’t really be trusted in water. The F150 is secure and strong, but the water leakage makes me suspect its build quality (plus, the price).

If I had to pick one, what would I go with? Either the R500 or the Survivor — I’m afraid I just can’t wait for the transfer times of the Lacie, and unless you need security, both of these are better choices than the F150 based on my testing. Between those two, it depends on taste, really; if someone put a gun to my head, I’d go with the Survivor, since it’ll work in close quarters with other filled ports, it’s totally waterproof, and it’s lighter than the LaCie, though it’s also the bulkiest.

Consider picking up one of the cheap 8GB drives even if you don’t think you need one. It’s comforting to have your most precious documents and photos stashed away on something, especially when it’s as plainly indestructible as the Xtremkey. All prices are based on a quick perusal of online shops; your mileage may vary.